"Are we moving towards a society where everyone is polyamorous or in open relationships?"


That headline leads a long article in yesterday's Metro UK  online, part of a feature series called "The Future of Everything." Previous articles dealt with topics like quantum computing, uses of graphene, the world's growing clean-water shortage, and sex with robots.

The answer, in my definite opinion, is no. Many people are genuinely monogamous. And even in a future society that's fully poly-aware and poly-accepting, I think 80% or 90% of partnered people will be in functional monogamy at any given time if only because it's structurally simpler.1

But we will have a society where most people grow up knowing of the polyamorous possibility, and where there will be ever fewer hostiles simply due to familiarity with the concept and people practicing it. An open/poly 10% or 20% of the population would mean others encounter a lot more of them in everyday life than, for instance, LGBTs. And we're moving toward that awareness faster than I expected.

Are we moving towards a society where everyone is polyamorous or in open relationships? 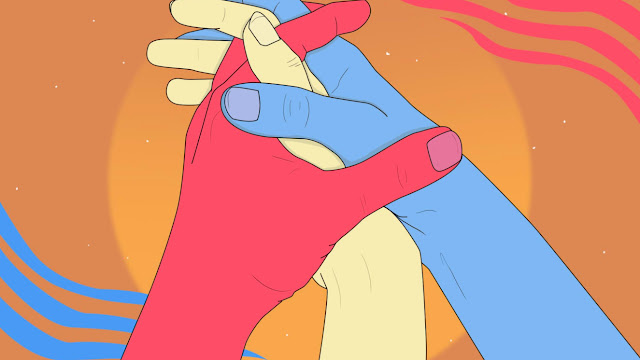 ...Polyamorous relationships are built on a principle of being open and honest with all your partners and building something that works for you.

...For a society where monogamy is the most common type of relationship, having more than one partner may seem ‘wrong’ but Janet Hardy, author of The Ethical Slut, argues that having one sexual partner is not necessarily natural. ‘I don’t think humans are biologically inclined toward monogamy,’ she tells Metro.co.uk.

‘No other primate is monogamous, and monogamy is very rare in nature. Many creatures who have long been thought to be monogamous, like swans, are in fact biologically inclined to be pair-bonded – but sexual monogamy is not usually part of of that bond.

‘This does not mean, of course, that monogamy is not a good choice for many humans – it obviously is, for a great many people. But I don’t think that humans raised in a culture which values all consensual choices equally would tend toward lifelong monogamy.’

...Could we be moving away from monogamy towards a future where everyone is polyamorous?

Rachel, 34, has been in a polyamorous throuple for six months with Katie and John, both 35.

‘Our methods for courting and dating have changed drastically with the rise of Tinder, Grinder, Bumble etc,’ she says. ‘Sex and connection are more easily accessible.

‘There’s a perception that you can’t trust your partner or you must keep on eye on them to prevent them cheating, emotionally or otherwise, because they are not fulfilled by monogamy and unable to express that. I think polyamory is one solution that many people will discover as it becomes more openly represented and less taboo.’

The triad met on a swinging site when Rachel was with her ex-husband, but when that relationship broke down, Katie and John reconnected with Rachel and asked her to join their relationship.

...John, Katie and Rachel are very open about their love for each other. They have found that attitudes are starting to change in some way, particularly as polyamorous people are using social media to improve visibility. ... ‘While representation hasn’t improved much in media, I have discovered a whole community through Instagram that makes me hopeful,’ Rachel says. ‘There are others just like me bucking social norms for what makes them happy.’

...John says: ‘Katie and I both quickly realised that neither one of us were interested in a conventional monogamous relationship again.

...Relationship coach Sarah Louise Ryan thinks that in the modern age, polyamory is becoming a much more viable option for many people: ‘I do feel that we live in a modern dating world where we are slowly but surely, and I believe unfortunately, moving away from the idea of monogamy,’ she says.

...For John, Katie and Rachel, polyamory means a stable relationship, just with an extra person, and they are all equally committed to each other.

Others have many more partners and their polyamory is much more flexible, and often not all the partners in a relationship are connected. Sally, 33, from London, has been in poly relationships for 10 months. ... ‘It is only recently that I have begun to feel like I have a handle on how this all works and how to manage my relationships.

‘It takes so much energy in listening and being honest with yourself and others to make things work. Now I have two major partners I love as well as three casual partners, I understand much more about polyamory.

‘There is a vast difference between seeing multiple people casually and being honest about it and that being ok, and feeling deep and full relationship feelings including love for more than one person at the same time. It’s taken a while to get my head around, but I’ve never been happier. ...

‘It’s a big leap from mono to poly and it takes a certain kind of outlook on life to be comfortable in a poly situation.

‘...Poly does have an advantage in that you can set up your relationship landscape exactly the way that works for you with people that fit with you, so there are so many options to not be monogamous. With that freedom it seems likely that poly will be on the rise but I don’t think monogamy will disappear entirely.’

Says sociologist Dr Ryan Scoats, of the Centre For Social Care and Health Related Research at Birmingham City University, ‘I am not sure if we would ever get to a point where those who were polyamorous out-numbered those who were monogamous. Just as monogamy is not right for everyone, nor is consensual non-monogamy (CNM).’ ... He does think it will grow massively in popularity. ... ‘but it is impossible to say whether it would ever become the dominant relationship style.’

Part of that acceptance might come from building a family with children. ... The first three-parent babies have been born, where DNA from three people is mixed. It’s only being used to prevent inherited diseases now, but technology could be developed further. ...

So what will relationships look like in the future?

‘If/when the world is genuinely nonjudgmental about any form of consensual relationship – which I don’t expect to see in my lifetime – many people will still choose monogamy,’ Janet Hardy says.

‘Not everybody wants the amount of stimulus, effort and communication that poly requires; many people prefer the consistency and ease of monogamy.’

But with visibility and acceptance of polyamory, in the future we could see more people more willing to incorporate it into their lives. ‘My best guess is that in such a world, many people will flow back and forth among different relationship agreements as their lives take different shapes,’ Janet says.

‘One pattern could be perhaps solo poly in their late teens and early twenties as they explore; monogamy during the years of having children and building a career, which require more attention than poly can accommodate [though it's generally easier in polyfamilies that cohabit and share child-rearing. –Ed.]; poly in midlife and, as they age, back to monogamy or celibacy, depending on the flux of libido and the amount of attention they have available for relationships.’

1. In the poly world, the more complicated the relationship structure the less often it "occurs in nature." There are more vees than full triads, more triads than quads, and more quads than quints. Extrapolate this trend back in the other direction, and there will always be more couples than multiples.

The exception to this is the even larger intimate network, which is probably the most common style that develops in cities and communities that are rich in polyfolks. But within a network, the trend for primary-style householding is still the larger the rarer, with pairs predominating.

I think there would be way more than 10-20% of people living some form of polyam if monogamy and polyamory were considered equally valid ways to do life. We also would have to think about people who remain single or solo, who wouldn't fit in either category. Those numbers are increasing, too.

I think there'd be less single if poly was more common though. Thing is, if you're monogamous then for you to accept someone as your partner they have to be a EXCELLENT match across MANY things.

You have to have the same desire for where and how to live, whether or not to have kids, what vacations to take, be sexually compatible, and so on -- because monogamous people usually expect ALL of this as a package-deal. All or Nothing. And some people then, end up with Nothing. In a poly setting, this changes. You can have a relationship with someone if they're offering SOMETHING that you want, they don't have to offer EVERYTHING that you want.