"4 Clear Glasses Frames that say ‘I haven’t tried polyamory, but I’ve watched many VICE docs on the matter’."


This ad had me for a bit. I mean, capitalism, right? 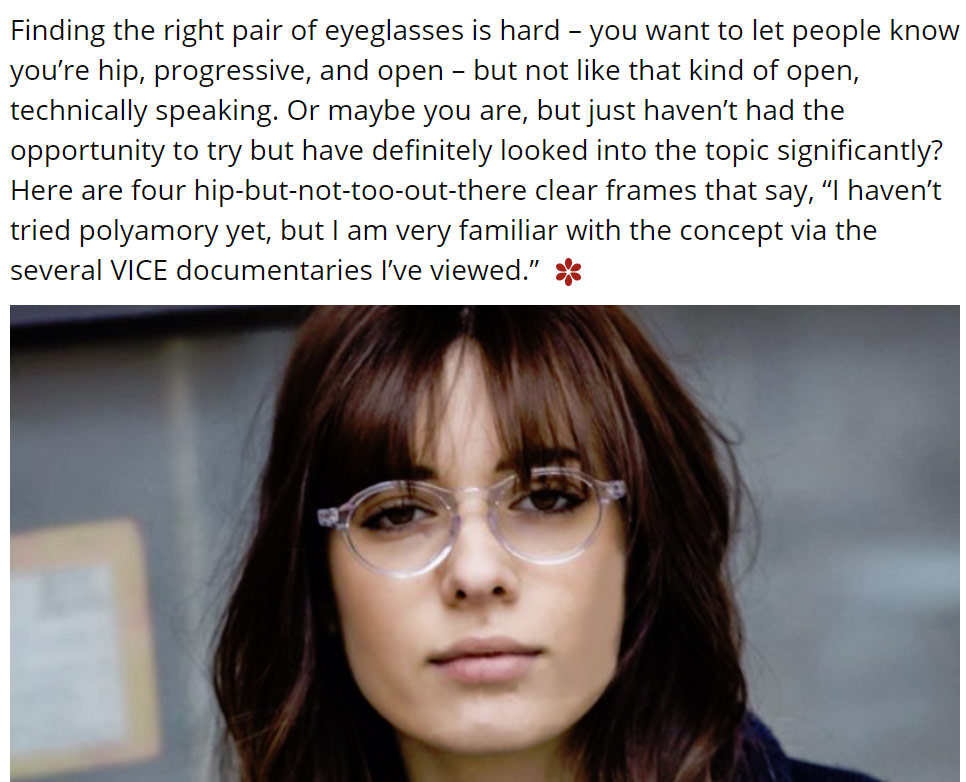 It just appeared on a feminist site named Reductress. It's a 5-page click-by-click, because capitalism: 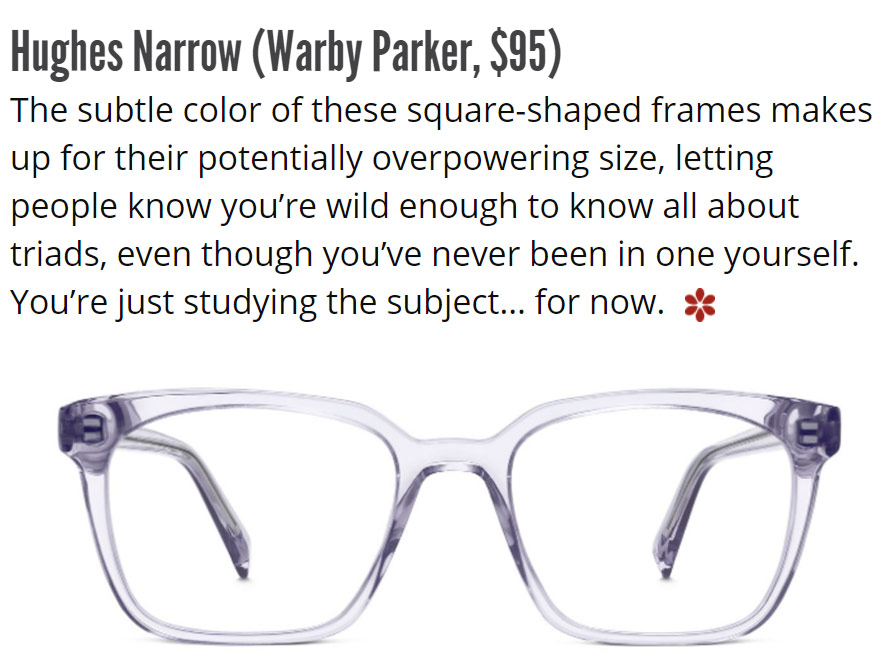 
Aaaand now that we're off and running, a backlogged collection of poly humor from all over:

● From KamalaDevi McClure's Most Poly Man in the World top ten:

He's so honest, when he masturbates with his right hand, he tells his left.

Every time he sneezes, someone, somewhere stops cheating.

When he goes to the zoo, the bonobos watch him. ...

● On Clickhole, Experts Warn That This Polyamorous Relationship Could Expand To Cover All Of Seattle By 2021 (July 12, 2017) 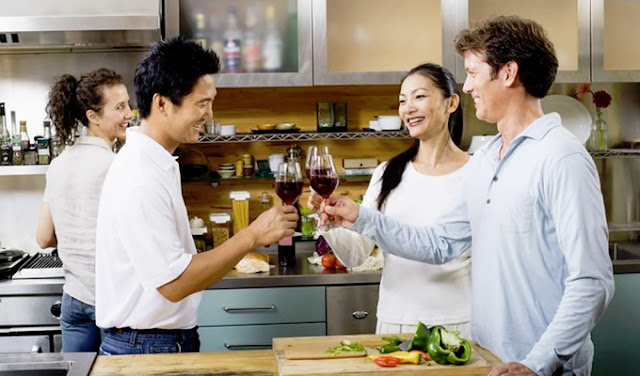 West Coasters... you’re going to want to be prepared. When Adam and Kelsie started dating outside of their relationship in 2014, few expected it would grow to involve more than some close friends and Tinder matches. Today, though, experts are warning that at its current rate of growth, their polyamorous relationship could expand to cover all of Seattle by 2021.

Folks, this is not a drill.

Adam and Kelsie first came to the attention of University of Washington researchers last year, when it was discovered that their dating network already extended through almost the entirety of Seattle’s circus arts community, and was rapidly encompassing its live lit scene. It soon became clear that between their book groups, Catan tournaments, Kelsie’s aerial silk classes, kink meet-ups, burner parties, and Adam’s job at Microsoft, the couple’s vectors for expansion were virtually limitless. ... 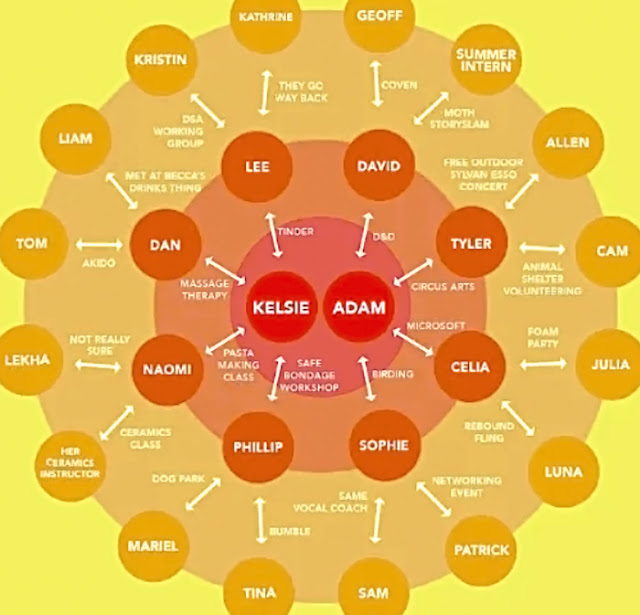 “As more and more individuals realize that love’s not some resource to hoard, I think we’re going to see a snowball effect,” said Dr. Eileen Callahan.... “You don’t want to be caught off guard.  Make a plan with your loved ones for if and when you discover that monogamy is an outmoded institution for the accumulation of property, and run regular drills.” ...

● Speaking of uncontrollable spreadings, this thing is just a week old AFIAK and if you haven't been hit with it yet, now you are. You have 30 seconds.

● A banquet of snark with some uncomfortable hard kernels and a dash of the bitters: The Only Poly People You’ll Ever Date, by Ada Powers (July 20, 2016). The Elder Hippie with Limitless Sexual Appetite. The Manic Poly Dream Girlfriend. The Uncomfortably Hierarchical Couple. The Relationship, and Actual, Anarchist. ...

Turns out this is the same Ada Powers behind The Coffee Break Primer on Polyamory (2016), the best compact Poly 101 for the newly curious on the entire internet IMO. You may remember it as the article with this haunting illo of teaching astronaut moves to a 1920s audience:

● This one, of course, gets rediscovered every Thanksgiving: 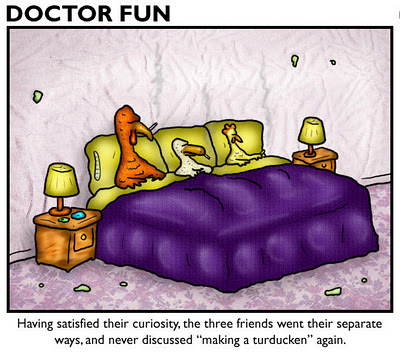 ● And a classic from The Onion: I'm In An Open Relationship With The Lord:

...It all started when I was 16 and first asked Jesus to enter my heart. It was incredible. He filled me up with His love.... Soon the honeymoon period ended, however. Whenever I spoke to Him, He seemed distracted and distant — sometimes I wondered if He was listening at all.... A few months later, I made a potentially disastrous discovery: I found out I wasn't the only one He was sanctifying.

...I was devastated. Here I had let Him into my soul in the most intimate way possible, and He had betrayed our personal bond by accepting the thanks and adulation of Sally, and God knows how many others as well. So I steeled myself... opened up my Bible, and confronted Him. In His divinely inspired scriptures, I learned that I hadn't driven Him to seek out others.... It was part of who He was.

...To be honest, I'd been flirting with polytheism all along by accepting the doctrine of the Trinity and simultaneously worshipping the Father, Son, and Holy Ghost. If I could see all three of them as viable deities, why not others?

...The Lord my God is a jealous God, and He didn't like the idea at first. He made it very clear that I should take no God before Him — but he never mentioned anything about taking one after Him!... So I've gone to Native American drum circles, New Age channeling workshops, and Shinto temples. I even spent a weekend in a no-holds-barred, worship free-for-all with two dozen Hindu gods! And now that I've opened myself up to exciting new spiritual experiences, our bond is stronger than ever.

Some may think it's strange, but I'm no longer worried about other people's unenlightened moralizing. My spiritual life is better then ever! I love God — heck, I love all of them — and I am one deeply, deeply fulfilled woman.

The whole thing. Post to friends and family if you dare.

I put the Onion thing on FB. God help me now. Sometimes ya gotta do what ya gotta do.