I'm going to try something new. Every Friday, I'll publish here a weekly summary of poly-in-the-news items that didn't make my regular posts.

There's so much poly in the media these days that I've been skipping too many items. Or I'll save up a batch on one topic, intending to do a giant one-topic roundup, and the task grows so big I never get a Round Tuit.

So every week I'll post a Friday Polynews Roundup of whatever else caught my interest, perhaps with briefer descriptions and quotes than usual.

I'll still do single posts for important items as they happen, and occasional collections on one topic like before. But I'll no longer be limited by that format.

We start off with items since the beginning of November.


● Research was announced on what makes an open relationship successful, and it got a fair amount of media attention. The Independent newspaper in the UK, for instance, summed it up in The key to a successful relationship according to research (Nov. 1, 2019). "Mutual consent, communication and comfort are key to the success of a non-monogamous relationship, according to psychologists at the University of Rochester," the paper reported. "The trio of behaviours has been dubbed the Triple-C Model."

The happiest people were at the two opposite ends of the poly-mono spectrum: mono people in truly monogamous relationships, and open folks in truly informed, consensual CNM. In between were various shades of misery.

The researchers made a graphic summarizing their results. It also got a lot of media play. The conclusions are at bottom; dark blue there means relationships functioned worst; light blue, best. 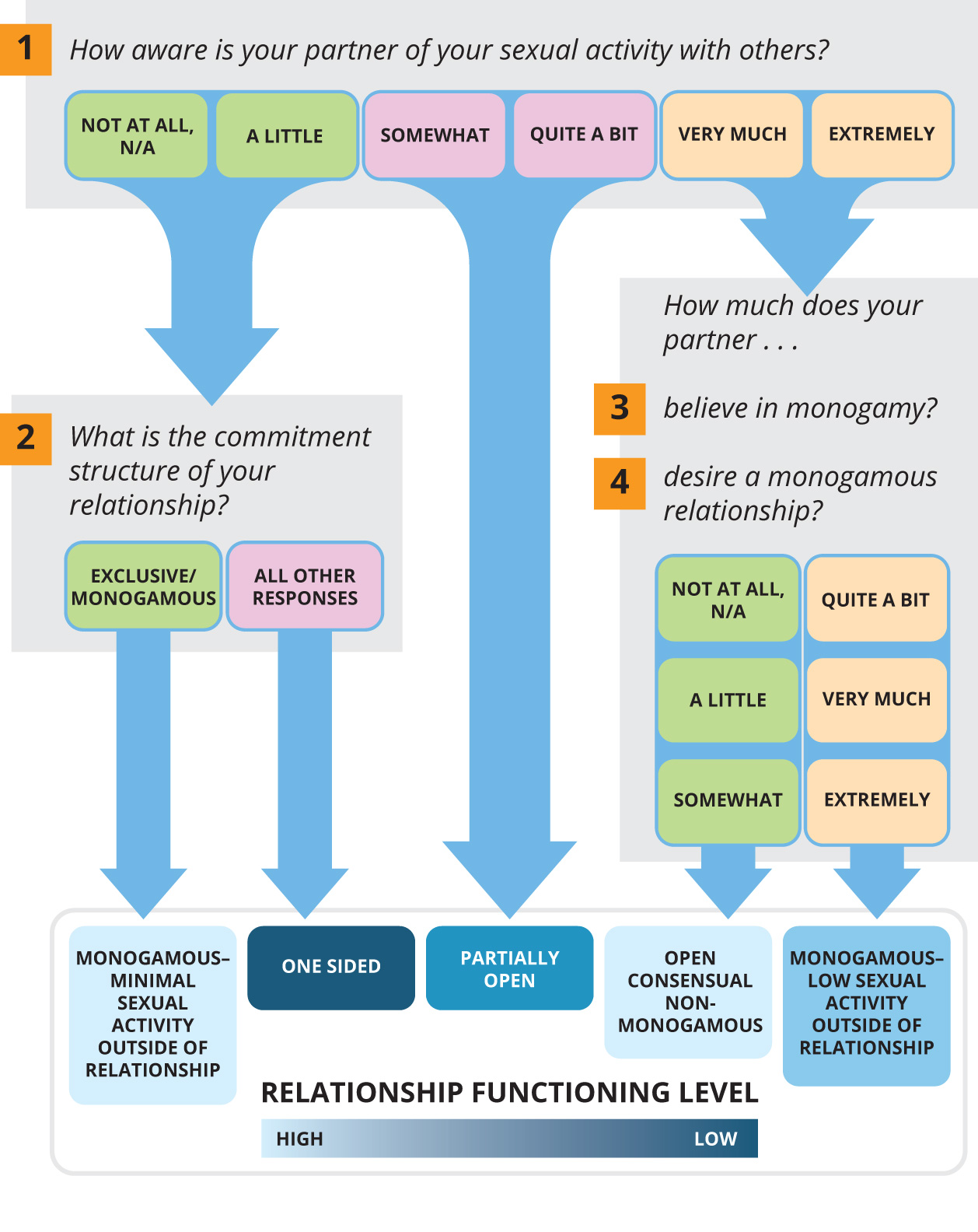 A Facebook commenter with about 15 years of poly life offered a more practical and specific list for success.


● And there was my Wednesday post about a survey of polyfamilies' experiences with the medical profession around pregnancy and childbirth.


● In Society19, a spending magazine for college women ("the ultimate guide for fashion, beauty, dating advice, and dorm decor"), we got Is Being In A Polyamorous Relationship The New In? (approx. Nov. 8). It's a nice bundle of things for newbies to consider.

We ask the questions that will have you asking if this is the sort of relationship you want for yourself. Polyamory may be on the rise, but that's because people have that choice now to make freely. So by the end of the article, see if it is a choice you are wanting to make.

On the new album “Territories,” Goss opens up about his relationships with both his husband and his boyfriend, and he lays bare some hard queer truths from his real-life struggles in many areas, including pieces about polyamory and domestic violence.


● The statistic is often sited that 20% of Americans report having been in a consensually non-mono relationship at some point in their lives. That's misleading, says the Catholic News Agency: Despite the hype, non-monogamy is far from common, researcher says (Nov. 6). It's about an article by Charles Fain Lehman for the Institute for Family Studies. He instead cites an "i-Fidelity" YouGov survey done for the Wheatley Institute of Brigham Young University that got a result of 12%, not 20%.

Actually, though, he gets his main point backward. He says that because the survey with the much-quoted 20% was only of single people, it missed the more stable, monogamous population of marrieds. In reality, the singles-only sampling should mean the total of Americans who have ever been in CNM is higher, not lower, than the reported 20%. That's because all married people were single before they married. So the survey caught people earlier in their lives than the population average. The now-marrieds have had additional time, on average, to try consensual non-monogamy.

And we can certainly tell you that scads of couples who were mono when they married later show up exploring the swinger, open, and poly worlds.

Also, a different study using different sampling methods in Canada (culturally similar to the US) independently found that about 20% of Canadians have been in CNM at some time in their lives, and that 4% of their current relationships are open.


● In Cosmopolitan: Bella Thorne Says Smoking Marijuana and Having a Polyamorous Relationship Will Change Your Life (Nov. 14). I can attest that the title is true. Bella Thorne is an actress/ singer/ director. "Also on [her] agenda: staying friends with your exes." The celebrity press is full of this story right now.


● From Insider: The one mistake monogamous couples make when considering polyamory, according to a sex researcher (Nov. 14). And what's that?

"Having an open marriage, polyamory, or swinging really should be coming from a sense of deep security and stability, like 'I feel good with my partner. I can do this,' not necessarily from a fragile state," [Amy] Moors [of Chapman University] told Insider.

See you in seven days, if not sooner.