Friday Polynews Roundup – Happy poly in Cosmo and the tabs, a student's push against polyshaming, more

● This piece, full of gorgeous photography, splashed on the same day into several competing British tabloids with combined circulations in the millions. As usual, the polyfamily is not in the UK but the US, in this case Florida. They sound like a rare case of unicorn hunters finding a savvy, experienced "intentional unicorn." It seems to have worked out well for all of them.

Here's from the version in the ugly Sun, which Prime Minister Boris Johnson is working with for his coming election. THRICE AS NICE: Polyamorous throuple say group yoga helps control their jealousy (Dec. 3, 2019)

Michael Taylor and his wife Lauren, both 30, met in 2011 while studying together and married in 2016.

But after seven years together, the couple, from Florida, decided they had ‘more love’ to give, and decided to spice up their relationship by looking for someone to join their unit.

...In 2018 they attended a gig where they met Jessica Woodstock, also 30, and say they all ‘fell in love together’.

Now the trio operates as a throuple, with Michael, a construction engineer, saying that the relationship is equal between them all.

The throuple say they intend on travelling to Thailand or Indonesia to get married, as a union between three people is illegal in the US. ...

And they hope to extend their family in the future by adopting children or having their own.

...Michael explained how they work as a trio, saying: “Our delta is a 33 per cent shared love between the three of us.

“We all have equal responsibilities to care for ourselves and each other.

“Although our triad is predominantly the three of us, there are three additional relationships that need recognition: Michael and Lauren, Michael and Jess, Lauren and Jess."


Lauren said... "It’s important to communicate each individual’s wants and needs, all day, every day, so that no emotions are suppressed.

“Any relationship, monogamous or otherwise has its challenges. Being human, we are bound to feel insecurity, anger, sadness, etc. at some point.

“Although these emotions stem from both internal and external factors, we work together to consciously remove them from our space.”

As the group solidified their relationship, they faced telling their parents about their new set-up. ...

“We were extremely careful and patient in explaining it to Lauren’s family because of the adversity – coming out as bisexual and welcoming another woman into the marriage.

“However, they warmed up very quickly and love Jess and Michael as one of their own. At this point, all three of our families are welcoming, accepting, and loving toward the spouses. “We know it’s not very often you come across families as fun and supportive as ours. ...

“A triad is a delicate balance.”

The British tabs (or perhaps MDWFeatures, which sold them the package of story and pix) have worldwide reach. For instance a piece about the same people appeared in India in iDiva, "the no.1 online destination for Indian women offering style and beauty tips, relationship advice, entertainment news and celebrity gossip...." Can’t Do A Relationship With 3 Partners? Well, Someone Is Nailing Polyamory & How! (Dec. 4).

(BTW, after all this happytalk about such a successful FMF triad family, see Evita Sawyers' YouTube Why Are Triads So Hard as an antidote.)


● Not to be outdone, papers using another tabloid-content agency, Barcroft Media, rushed out with this: Polyamorous woman, 20, reveals she fell pregnant by one of her FOUR partners after they all went on vacation together – but she says they will ALL raise the baby as a 'family' (Dec. 5) 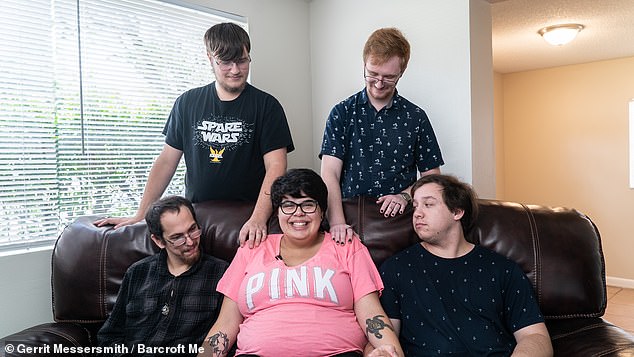 – Tory Ojeda, 20, from Jacksonville, Florida, lives with three of her four partners.

– Also found love with their long-term friends Ethan, 22, and Christopher, 22.

– Tory and Chris found out that they were pregnant in May, while she got engaged to Travis in July. ...

Includes an 8-minute video of them.


● Meanwhile, Cosmopolitan can't seem to get enough poly stories. New on its website is an interview with three members of a large extended network: Sex Talk Realness: What It's Like to Be Polyamorous (Dec. 4):

By Carina Hsieh and Rachel Hills

Imagine if your "one and only" was one of many? Polyamorous people believe that you can love more than one person (sexually and/or romantically) at a time.

In this week's Sex Talk Realness, Cosmopolitan speaks with four people about what it's really like to be polyamorous.

How old are you?

...What made you want to try polyamory?

Woman A: I have always had difficulties in monogamous relationships. I get bored of people quickly and was a serial dater until I found out dating multiple people at once ethically was an option.

Woman B: When I was in college, I needed to break out of socially constructed norms to really figure out who I was. I had oppressed my gayness without really being aware of it because of my family and community. I used college to begin to break these chains and redefine myself. One of the men just outside my social circle was poly and had a long-distance boyfriend. We hit it off as he helped me through a traumatic college sexual assault and we hit it off. I had always been curious and felt a low commitment romantic relationship could help me, my confidence, and reclaim my body.

Man A: I was entering a relationship with a poly woman with the hopes of monogamy at first, but per her suggestion I read books like The Ethical Slut and More Than Two and thought ‘Hey, I’ll give it a try too’. We both made promises of primary partnership to one another and vows of open communication. ...

Do you have any rules you never break in your relationships?

...Woman A: My husband and I agreed to only have children with each other. That’s the only big one.

Woman B: Most of our rules revolved around complete honesty. We both were able to do as we wished with whomever, but had to tell the other person before if possible. So, if a crush or tension grew with another person, we would discuss it. It was refreshing to regularly discuss the very normal attractions that happen in an environment like a small college campus. Another rule was his boyfriend was his first priority; I was perfectly happy knowing that there were no long-term expectations. ...

● More down to earth, at Emerson College in Boston in its paper the Berkeley Beacon, a student tells of struggling with fear of shaming about being in an open relationship, and overcoming it: Love Column: The door’s open, come on in (Dec. 4)

...I’m polyamorous, and, for a while, that was hard for me to admit. It takes a lot for me to define myself as the extremely queer person I am, because I’m afraid it comes off as a search for attention.

To me, polyamory means that my head and my heart have more room to love. I’m not afraid of commitment. In fact, I welcome it. Yes, I want to get married someday. I want to have kids. I want to live the American dream or whatever, but I want to do it my way.

If that makes you uncomfortable, then you should step back and analyze why. It’s not anyone’s job to judge someone else’s relationship, and doing so to my face is incredibly rude. Don’t say it’s for my benefit, because I’m in a loving relationship with an amazing woman, and I don’t need anyone’s validation.

My polyamory is something that I now cherish because it has opened up my life to so many incredible opportunities. I have never felt stuck in my one relationship in college because I allowed myself to experience everything that came to me. ...

● In another student paper, The Hornet of Fullerton College in California, a good poly 101 explaining basic concepts and values: Opinion: Polyamory is a non-traditional option for love (Dec. 6).


● And in poly & Christian news, the young Brian Murphy — whose famous YouTube video Jesus Is Polyamorous raised a huge uproar in conservative Christianity in November 2018, has posted a followup vid on his adventures since then, including the class he now teaches. Jesus Is Polyamorous: One Year Later (Nov. 13; six minutes):

Ta-ta for now. See you next week if not sooner.