In Israel, a family of three adults are declared the children's equal parents. 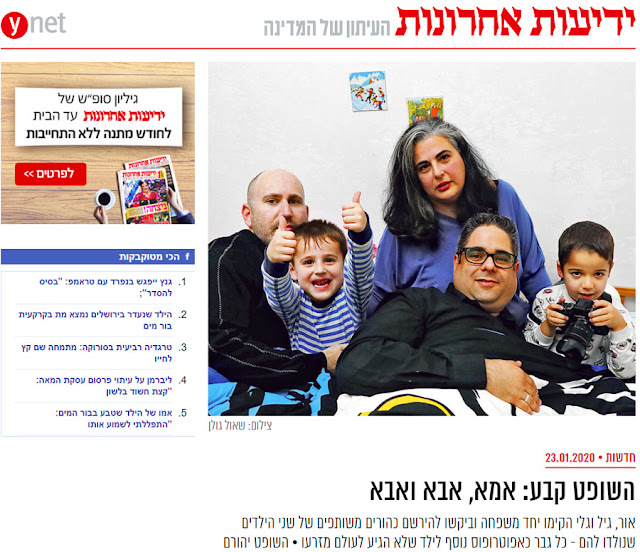 Another step for polyfamily recognition: An Israeli judge, guided by "the best interest of the children," has granted a woman and her two gay male living partners equal co-guardianship of their children. Erez Benari from Seattle tells us,

This broke yesterday and hasn't been officially translated to English yet. An Israeli thrupple asked to legalize their non-traditional union by approving all 3 adults in the family (2 guys, one woman) to hold "legal guardian" status of their 2 children. Each of the men had a separate child with the woman, and now each of the dads is officially a father to both kids, as is the mother.

Hopefully, this is a first step towards a legal union between the adults.

Orr, Gil and Glee formed a family and sought to register as co-parents of the two children born to them — each man as another guardian of a child who never came from his seed.

The state is in principle opposed to recognition of a family structure of three parents. ... The judge who recognized triple parenting is Yehoram Shaked. The decision that gave the three parents equal status to their children reads: "The children were created and born into a situation where they have three parents. Rejection of the lawsuit will have one and only meaning for the parties: Continued disobedience and conduct that does not benefit the minors or the whole family."

Judge Shaked further stated that when considering the best interests of the minors, the good of the whole family must also be taken into account. In the past, Shaked has made a decision on triple parenting, in another case with other legal circumstances, but is prohibited from [publicizing] and cannot [give details] about it.

...[The two men] living together wanted to have children. They contacted Glee, whom they knew, and together decided to start a single family with three parents. The pregnancy process took place abroad.

...The three parents' attorneys, attorneys Haggai Kalei, Danielle Jacoby, Carmel Ben Tzur and Carmit Mizrahi, argued that the request to add a guardian to each child came to reflect the reality in which the children live from their day of birth and that they consider themselves brothers for everything. The parents' attorneys said: "In the State of Israel there are thousands of families where children are born prematurely and intentionally to a loving family unit that includes three parents. In the LGBT community, this family structure is particularly common. But so far, the court has not given a proper response regulating the rights of these family [units]."

Itai Notak, a member of the Tel Aviv City Council and who assisted in the struggle of the three parents, said: "Life is stronger than conservative perceptions that our lives must not be waged."

Attorney Dalit Yaniv-Messer, a family law expert, said: "The importance of providing guardianship to a non-biological parent is that it has the right and duty to care for the minor's needs like his biological parents."...

This recalls a similar landmark ruling in Newfoundland, Canada, in April 2018.

Another precedent set in my home country of Israel. A throupple of one man and two women has received a "Common law partner" recognition by the court.

The man, referred to as "R" in the article, was recognized as a common-law partner of one woman, but felt his connection with the 2nd woman ("N") was strong, so he took it to court with lawyer Shiri Robbins Golan. N says she signed a partnership contract with R because has has multiple financial assets and she wanted him to feel comfortable with their relationship, and not be concerned about her motives (as in, being financial rather than romantic).

I'm a native Hebrew reader. This story is of a gay couple who want to raise the kids with the biological mother. It isn't a poly story though still progress

^ Nevertheless they're a tightly knit household of three, regardless of sexual connections. I have friends, all straight, who have been a FMF triad family for about 25 years, their kids are now in high school, and they would take great offense if anyone told them they were not a triad just because not all the sides of the triangle were sexual.