Today is Metamour Day, "Honoring Polyamory's Most Distinctive Relationships." And not at all incidentally, stand with Ukraine.


Today, Monday February 28, is Metamour Day. Please share this year's graphic far and wide!  Here's where best to share it from.


...And browse more Metamour Day graphics to enjoy and share, including in Spanish, French, Norwegian, Maltese, German, Italian and Hebrew.
So why February 28th? Because Valentine's Day times two!
And why an annual recognition day at all?
Because look at the slogan that goes with it: Honoring Polyamory's Most Distinctive Relationships.
Which is precisely the point. Your metamour is your lover's other lover. Respect and consideration for your metamours — which may extend well beyond consideration into friendship, solidarity, and intimacy — is what sets polyamory apart from other forms of consensual non-monogamy. It's also why polyamory can shatter social paradigms that are supposed to enforce isolation and division.
And, not so incidentally, it is time right now to reflect on the rights and freedoms by which civil, democratic societies allow us to create our own lives, in this and in countless other vital ways, as long as we do not harm others.
More on that in a bit.
----------------------------------------
The Metamour Day initiative, now in its fourth year, is run by the National Coalition for Sexual Freedom. NCSF is a nonprofit organization defending the rights and legal safety of kinksters, polys, and sex-positive people generally. In many places in the world such an organization is not allowed to exist, or to exist only under constant fear and uncertainty. There are some in our own United States who would use the power of government to suppress and eliminate people like us and organizations like ours if they could. 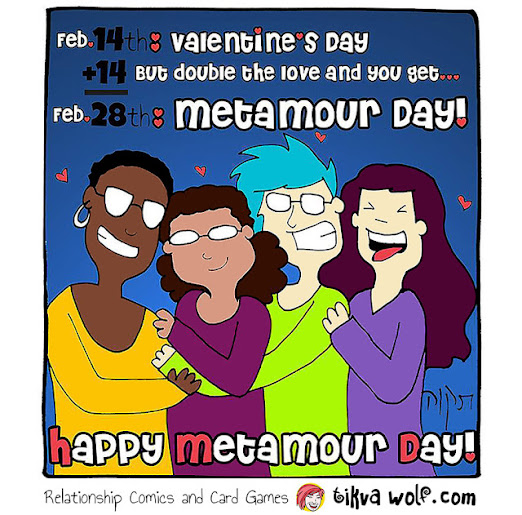 ●  But first, let's start with excerpts from Elisabeth Sheff's article for the first Metamour Day: Delighting in Your Beloveds’ Other Lovers (February 2019)

For more than 20 years I have been studying polyamorous families with kids, and I have seen them face the usual difficulties that come with life – illness, economic challenges, divorce, disability, and the like. What has stood out to me about these families who remain together in long-term polycules – some of them for 60 or more years – is that the metamour relationships make or break the family over the long term. These emotionally intimate, non-sexual chosen family relationships are so important in polyamorous families that I made up the word polyaffective to describe them.
Positive polyaffective relationships among metamours who become chosen family over time are the backbone of the poly family. Metamours who can’t stand each other and are never able to establish comfort (much less delight) in each others’ presence are not going to happily coexist over the long term. Metamours who add value to each others’ lives, however, can not only support each other when life inevitably throws them a curve ball, but also support the polyamorous relationship with their mutual partner if it falls on hard times.
...By promoting Metamour Day, NCSF hopes “to foster positive relationships between you and your metamours, whatever that might look like. It is not about forced compersion. It’s about communal appreciation within our family structures."
If you are lucky enough to have a metamour with whom you share compersion, celebrate them on February 28!

● That bit about "the metamour relationships make or break the family over the long term"? That's not just Sheff's observation of the families in her long-term study. Joanna Iwanowska of the University of Warsaw has published a paper titled Metamour Connections as the Underpinning of the Fabric of Polyamory (Jan. 2018).
"These bonds are significant and constitutive of polyamory," she writes;

...Polyamory stresses not so much the openness to having multiple romantic relationships, but the openness to having metamour relationships with other people. It is this second kind of openness – the openness to metamour contact and communication – that singles out a polyamorous person among other people who might be open to a multiplicity of romantic and/or sexual relationships, e.g. from such a monogamist who leads a double life.
...In a paper that appeared in the Journal of Applied Philosophy, Luke Brunning (2016) writes that “the presence of a third party is a constitutive feature of polyamory” (p. 9), and the third party is typically one’s metamour or a potential metamour. ... In addition to that, I argue that accepting the prospect of one’s partner dating another person entails agreeing to be in a relationship with this person, even if this relationship might remain indirect....  Metamour connections are the underpinning of the fabric of polyamory, and they deserve as much academic attention and research as the polyamorous romantic connections. ...

● Cartoonist Tikva Wolf writes, "When things are good, bask in the joy!"
● Kiki Christie's "The Benefits of Metamours," a cute list of six: 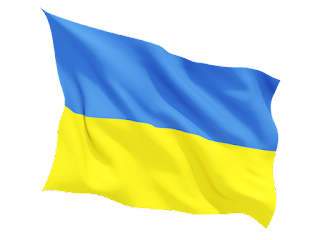 Stand with Ukraine. Our freedom to create non-traditional relationships is just one instance of how a free and pluralistic society respects our dignity to create our own lives. Such a society is only possible where people have the power to govern themselves and legal structures that reliably protect the rights of all.
For the last 15 years around the world, authoritarian brutalists have been increasingly emboldened to trash human freedom, dignity, and rights and to rule autocratically by fear, suppression and lies. People who create their own lives, and who insist on the democratic structures and legal protections that enable them to do so, infuriate and terrify such brutalists.
Now the lonely, isolated, brooding ruler of Russia, bent on empire by conquest, has launched a historic escalation in this global contest. "A turning point in the history of our continent," said German Chancellor Olaf Scholz. The outcome bodes to shape the future of the world.
For what it's worth, my stats say more people in Ukraine have read this little poly blog than people in any other country of Eastern Europe.
Do you put holiday lights in your windows? If you have blue and yellow bulbs, get them out and display them now. We've done that in our windows. Or put blue and yellow paper or posterboard on your door. More importantly, we're donating to relief agencies suddenly coping with the hundreds of thousands of people fleeing from Ukraine into the now-shrunken free Europe — with nothing more than they can jam into their cars or carry on their backs. We wish we could do more. Maybe in time we can.
Do your bit.