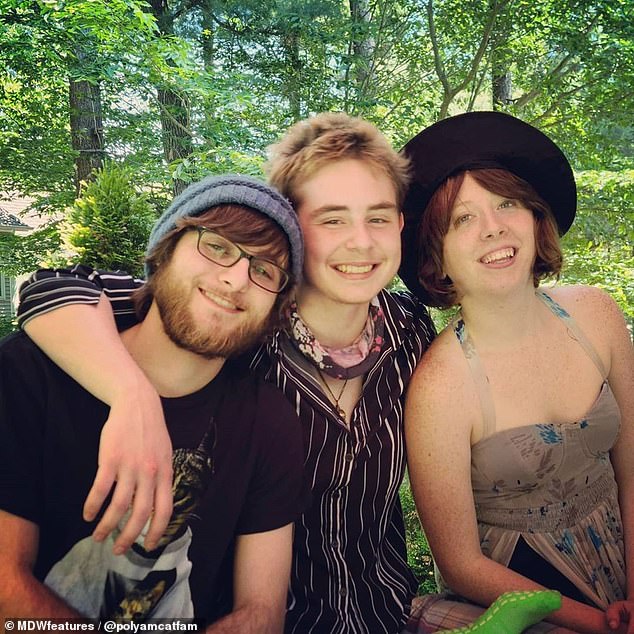 Welcome back to Friday Polynews Roundup, for September 11, 2020.
It was a thin week for polyamory in the media; the various growing national crises are pushing "non-essential" topics toward the media sidelines. But three items of note:
●  Remember the Porter polyfamily in Houston? They've been busy doing poly education and awareness work in the Black community, and they appeared last February on The Isiah Factor talk show on Houston's Fox 26 TV.

They've been involved with Black Poly Nation, have spoken at any number of community groups, and they've appeared on shows in both new and old media. Now they have a book out, and Fox 26 host Isiah Carey brought them back for a 4-minute segment, Catching up with the polyamorous Porter family (Sept. 4). Watch here:
The host couldn't be more appreciative, though he's still incredulous. See more about the book at their website, ThePortahFamily.com. Here's their well-stocked YouTube channel.  Facebook page. Their other media and podcast appearances.


●  More in the Department of What Poly Practices Can Offer Everyone, this time in The Greatist: Compersion Is the Opposite of Jealousy, and We All Should Learn It (Sept. 10)

By Melissa Fabello
When people learn that I practice nonmonogamy, one of the first questions that they ask me is “How do you handle jealousy?”
To which, I respond, “How do you?”
...Jealousy shows up in all kinds of relationships, and when it makes us intensely uncomfortable, we find ourselves doing anything to avoid feeling it.
It’s no wonder so many people feel confident saying “I could never do nonmonogamy; it would make me too jealous.” While choosing one relationship structure over another is a valid personal choice, that reasoning is misguided.
By that logic, I would never try anything new, for fear of embarrassment. I would never watch a tearjerker, for fear of sadness. I would never go on a rollercoaster, for fear of, well, fear. How many amazing things would we refuse to do, if we were equally avoidant of other uncomfortable feelings?
So what is it about jealousy that makes us so uniquely uncomfortable?
In talking with thousands of people about their experiences with jealousy, in my work as a sex and relationships educator, it appears that where people get stuck is in feeling like jealousy is an unacceptable emotion. ...
But... what if we let jealousy be like every other emotion that we feel — an indicator that our nervous system is asking us to pay attention to something?
Let’s start here: Jealousy is a perfectly healthy emotion
...Jealousy alerts you that a situation doesn’t feel good to you — and asks you to sort out how to regain a sense of safety and security. So why would you want to get rid of it? That sounds like an adaptive emotional response to me! ...
Like with any emotion, the key is being careful of what you do with it. ...
So how do we start changing our response to jealousy?
...When I was a community educator for a local domestic violence agency, I co-taught workshops on healthy relationships for middle and high school students. And in that work, we would make a distinction between jealousy and extreme jealousy, where the latter indicates a response that sets out to control other people. ...
When does jealousy cross the line into possessiveness? ...
How compersion can help relieve the discomfort of jealousy. ...
Compersion is the positive vicarious feeling of seeing someone you love have their needs met.
...Seeing your partner happy doesn’t always feel like jealousy or disappointment or rage. Most of the time, it feels like compersion.
Compersion is essentially the opposite of jealousy, and it’s an experience we talk about a lot in nonmonogamy. ... Jealousy, at the end of the day, is your nervous system alerting you to a threat to your safety. ... You can change how you approach that feeling. Instead of “How can I remove the threat from my partner’s life, and therefore mine?” ask “What is this telling me? What do I need to feel safe again?” ...

●  And you knew it was coming. This week's polyfamily heart-melter in the British tabloids is about the @PolyamCatfam, the adorkable young MNbF triad you'd dream of going on a picnic with. It's in the Daily Mail September 7: Couple who invited an old school friend to form a throuple claim it's EASIER than a normal relationship because you're not putting pressure on just one person to fulfil your needs.

Excerpts, and a few of the pix:

Music teacher Amber Parker, 24, and boyfriend Brandon Meadows, 23, from Muskegon, Michigan, first met on dating app Tinder in January 2017 and their initial attraction soon blossomed into an official relationship. Amber and Brandon were strictly monogamous at first, but discussed the possibility of opening their relationship up to a third person.

It wasn't until New Year's Eve 2018 when they met one of Brandon's old school friends, Eli Schalk, 21, at a party, that they realised that Eli, who is non-binary, could be the perfect person to add to their relationship.
...'We had a good time playing board games and talking with friends, and the next day or so, we all mentioned to each other that we thought each other were attractive, and that we wanted to talk and see each other more.'
The three continued to hang out together and bonded over interests they had in common, such as art.
...When they first formed a triad, Amber admits that there was some jealousy, but with honest and open communication all issues were resolved.
'In the beginning of our relationship, there were frequent moments of possessive and jealous feelings, but we would talk through them every time they arose and got to the root of each issue.
'Since we were open to communication from the beginning, those moments don't happen much anymore, if at all.
'The hardest part to me is dealing with the fear of judgement and assumptions from others, but that fear has almost dissipated as well.
'We have learned many things from each other and the triad experience as a whole. Eli has taught me more about incorporating science and spirituality into my daily life. Brandon has shown me growth and structure, and both have shown me what is possible when humans genuinely care for each other and themselves simultaneously.
...'The assumption that multiple partners must be a result of cheating or manipulation is just as silly as the assumption that monogamy is always a result of possessiveness and jealousy.
'We all just want to love and everyone loves differently. Any support and happiness we can get on this planet should be encouraged and celebrated.'
...'Some people have asked about our sex life as soon as they find out we aren't monogamous.... Then some feel the need to tell us if they would sleep with a man, with a transgender person or with two people, when we really never asked for that information.' 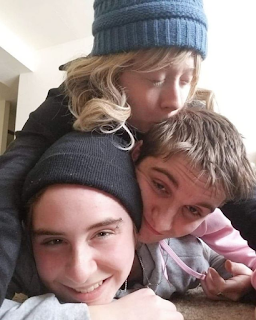 ...Amber said: 'Polyamory helps us meet our romantic wants and needs in a way that doesn't put unrealistic expectations on one given person.
'Instead of wishing one person would be more cuddly, I can have cuddle time with both of them.
'Instead of wishing I was into a certain show or book, they could talk about their shared interests with each other.
'There is a lot more to it, but in essence there is more love, communication and perspective in our relationship than previous monogamous relationships we have been in.'
--------------------------------------------
For the most part, the reaction to their relationship is incredibly positive and those close to them are supportive.
Amber, Eli and Brandon plan to buy a house together one day, adopt children, and would like to see the day when marriage between three people is legal. ... 'We want to grow old together and support each other through life.'
...They document their lives as a throuple on their Instagram account @polyamcatfam, which also features their much-loved pets.