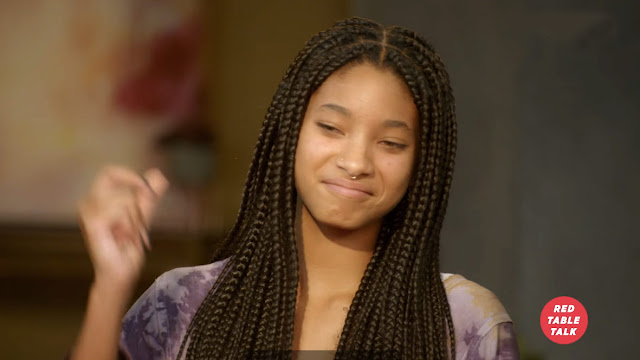 Major media this morning are again taking notice of  Willow Smith, 20-year-old daughter of celebrity actors Will and Jada Pinkett Smith, after her superb advocacy for polyamory on Jada's Red Table Talk, a Facebook Watch show with 10.6 million followers. The episode, Is Polyamory for You?, runs 34 minutes with a number of guests (April 28; Season 4 Episode 4).
Watch the show below. The first minute gives a good sense of it.
Willow is on with her mom (left above) and her initially skeptical grandmother. Guests later joining in are Gabrielle Smith (center), who's a poly writer you've seen here several times, and her married boyfriend Alex; Gabriella Alexa Noel, a poly newbie who has pulled herself together after a strict religious upbringing; CNM relationship coach Effy Blue; and Michelle, who says she is working "to normalize polyamory in the Asian community."
Willow closes the show with this:

I just feel so excited and seen because I've been studying polyamory for a really long time, and I just want to show there's so much here to be mined, and to be uncovered.

●  In USA Today this morning: Willow Smith details her lifestyle on 'Red Table Talk': What you should know about polyamory (April 28)

On this week's episode of "Red Table Talk," Willow Smith – daughter of Jada Pinkett Smith and Will Smith – opened up about being polyamorous.
"It's about being able to have the freedom to create a relationship for yourself," she said on the show, to the confusion of her grandmother Adrienne Banfield-Norris.
"With polyamory, I think the main foundation is the freedom to be able to create a relationship style that works for you and not just stepping into monogamy because that's what everyone around you says is the right thing to do, " Willow Smith said. "I was like, how can I structure the way that I approach relationships with that in mind?"
With the help of a diverse group of polyamorous guests, "Red Table Talk" broke down myths and stigma associated with non-monogamy. We talked to experts to further drill down what it's all about. ...

USA Today goes on to present a basic Poly 101, including the points that honesty and trust are paramount, that it's not all about sex, and a sidebar "Kitchen-table polyamory and more terms explained."
●  CNN's take: Willow Smith shares she's polyamorous on 'Red Table Talk' (April 28):

...The 20-year-old daughter of Will Smith and Jada Pinkett Smith chose Wednesday's episode of the Facebook Watch show "Red Table Talk," which she cohosts with her mom and maternal grandmother Adrienne "Gammy" Banfield Norris, to [highlight] that she is polyamorous, defined as being involved in more than one romantic relationship at the same time.
Pinkett Smith asked her daughter how she arrived at knowing that fact.... "So, I was like, how can I structure the way that I approach relationships with that in mind?," the younger Smith said. "Also, doing research into polyamory, the main reasons why monogamous relationships -- or why marriage, why divorces happen -- is infidelity."
Her mother -- who made headlines last year with the revelation of an "entanglement" -- understood.
"When you were like, 'Hey, this is my get down', I was like, 'I totally get it,'" Pinkett Smith said. "Wanting to set up your life in a way that you can have what it is that you want, I think anything goes as long as the intentions are clear. You know what I mean?"
Smith's grandmother said, "For somebody like me, it feels like it's really all just centered around sex," though she admitted to having considered it herself. ...
But, for Smith, it's apparently less about the sex and more about the freedom.
"In my friend group, I'm the only polyamorous person, and I have the least sex out of all of my friends," she said.

●  On ABC News: Willow Smith announces she is polyamorous on 'Red Table Talk,' reveals 'only' reason she would get married  (April 28)

...This comes nearly two years after the "Transparent Soul" singer first expressed her interest in having multiple partners in a relationship. In June 2019, she discussed polyamorous relationships and her love for "men and women equally" in an episode of the Facebook Watch talk show.
...The 20-year-old said in her research into polyamory she found that one of the main reasons why monogamous relationships -- or marriage -- often fail and result in divorce is infidelity.
...As for how Pinkett Smith reacted to her daughter's revelation, she said "there's a lot of beauty that sits outside of the conventional boxes."
...Pinkett Smith -- who has been married to husband Will Smith since 1997 -- said she thinks most people are monogamous because they "feel like they have no other choice" and the idea that monogamy is the only choice is "deeply antiquated and no longer works."
...In the end, Pinkett Smith said she just wants her daughter to be with someone who loves her the way she deserves to be loved. ...

●  Yahoo Life: Willow Smith says she's polyamorous. Here's why the 20-year-old's admission is so important. It concludes with five solid paragraphs from poly theorist and educator Ruby Bouie Johnson.
●  Lots more media.
Will and Jada themselves have had some sort of uneasy open relationship for many years, which has long been a source of gossip for the celebrity press.
_________________________
Don't miss Polyamory in the News!
SUBSCRIBE by a feed, or
SUBSCRIBE by email