A Navy officer's gravestone with a poly infinity heart. The story behind it.

I wrote up this story for Memorial Day 2020.  It became my fourth most-read post in the year since. So here it is again for this Memorial Day, including a few new comments and updates.

On this Memorial Day weekend you may be visiting a cemetery. And if you happen to be visiting the Historic Congressional Cemetery by the Anacostia River in Washington DC, two spots of color on a certain headstone may catch your poly eye. 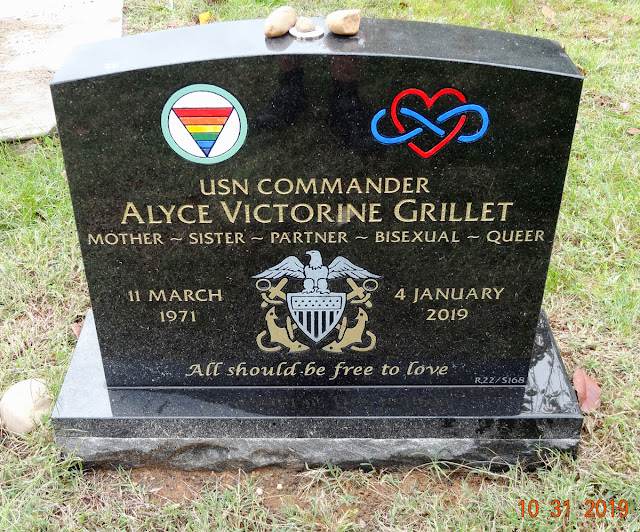 The stone is that of US Navy Commander Alyce Grillet. She died in 2019 at age 47 of colon cancer, at her home in Alexandria, Virginia, after a nearly 20-year military career.

There is a story. 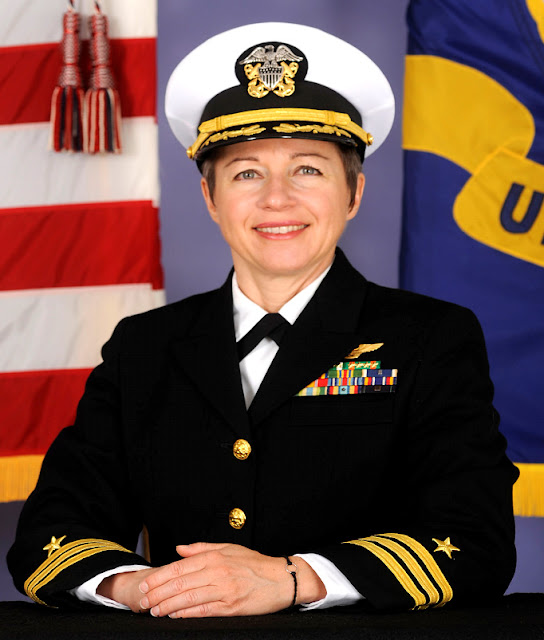 Her obituary noted the basic details of record: Her career included a variety of roles in naval aviation support, including 19 months aboard the aircraft carrier USS Carl Vinson during the Iraq War. "She was promoted to the rank of Commander in 2016 and reported to the Commander Fleet Readiness Center at Naval Air Station Patuxent River, Maryland, where she served as Personnel Military Director. Her last assignment was as Officer in Charge and Maintenance Officer at the Fleet Readiness Center Mid-Atlantic Detachment Washington at Joint Base Andrews."

And there was some more: "She leaves behind a jaw-dropping collection of personal artwork, focusing in her later years on the medium of permanent marker on canvas. She was a prolific reader of non-fiction, specifically “geeking out” on relationship psychology as game theory, and spiritually identifying as a Chaos-magic Buddhist. She was a community organizer in Memphis and Norfolk and taught classes in Relationship Dynamics and Non-Violent Communication. She helped lead Naval Air Systems Command’s Patuxent River LGBTQIA+ Advisory Team.

"In lieu of flowers, the family asks that donations be made to OutServe-SLDN ['advancing fairness and equality for the LGBTQ military and veteran community'] and the Semper Fi Fund ['to assist wounded veterans in all branches of the US Armed Forces'], or to your local LGBTQIA charitable organization."

Her grave is located in the Historic Congressional Cemetery's noted "Gay Corner," at the intersection of its Ingles Street and Henderson Street. According to the cemetery's LGBT walking-tour brochure, the Congressional Cemetery "is believed to be the world’s only cemetery with a Lesbian, Gay, Bi-sexual, Transgender section. Although earlier LGBT burials are located in the Cemetery, the 'Gay Corner' began in 1988 with Leonard Matlovich." (Matlovich was the Air Force Technical Sergeant who outed himself in 1975 to challenge the military’s ban on gay service, the first US service member to do so.)

Grillet "was an energizing whirl of charisma, intellect and passion for life," wrote a co-worker at the Patuxent Naval Air Station.

Another naval air colleague wrote, "Please know that your contributions have been significant and will appreciated well into the future by people who will never have had the pleasure of meeting or even knowing about you. You made a difference."

I know about this because, as it happens, my wife Sparkle Moose is old friends with a friend of Grillet's. He writes:

We met at a spiritual gathering, talked for a bit, exchanged email addresses, and hugged twice. That’s it. I left home the next week, on my way to Afghanistan. Corresponding began before I left the country. Images, thoughts, questions and answers — some trite, others touching on what “queer” meant to her. Communication progressed for the next three to four months. Then things changed. She had just started an important transition career course when she got a diagnosis of advanced stage cancer.

I returned on leave from Afghanistan days after she died but in time to attend her memorial service. When her headstone was installed on Memorial Day weekend 2019, I was still in the hospital recovering from a bicycle crash. I finally got in to see it in September, and knew of the words — but the symbols made it all the more powerful.

The military is now on board with gay rights. But polyamory, no matter how ethically and honorably carried out, is still grounds for court-martial and dismissal from the services, with loss of all benefits including retirement, if a superior finds out and has it in for you.1

But displaying it on your gravestone? Now, she is finally beyond their reach.
And under the Navy emblem she put, "All should be free to love."

When Brian Crabtree created the first infinity-heart symbol for polyamory back in the 1990s, he could not have imagined all the places where it would someday land.

1. Among the grounds for court-martialing someone for being in a group relationship are adultery, even if one's spouse is consenting, willing, and part of the relationship; or the catch-alls of "undermining good order and discipline" or "bringing discredit on the armed forces."

In practice, I'm told, if they want to keep you they'll ignore it unless you're too public about it. But if a superior doesn't like you, or is morally offended by the idea of multiple love, you have no defense and you and your career are toast.

–  A reader tells us, "Alyce was the founder of Norfolk Polyamory."

–  From another: "I'm retiring from the Navy after twenty years of service this summer, and I can attest that what you said is true. Poly doctors in the Navy have told me polyamory is more common in the Navy than society as a whole, but it's always kept quiet for fear of having a bible-thumping boss who will kick you out."

Others have commented on Facebook about this kind of fear and vindictiveness in the armed services.

–  Does anyone know the exact meaning of the emblem on the stone's top left? Update: A friend of Grillet's writes, "The circle is light green, indicating an LGBTQ safe zone. Alyce designed the layout herself after her diagnosis."
–  Narlexia comments, "I loved her dearly for almost four years.
Not a day goes by without me feeling the absence of her in my life.  :( "
–  Another: "Thank you. She is sorely missed, but having her life inspire others by what she did in her all too short life is wonderful hope."
–  Writes TG, "She was a dear friend when we were teens, from 1984 to 1993, and I'm pleased that Alyce and I were able to reconnect on Facebook as adults. Always enigmatic, always smarter than me, Alyce also saw Life through the prism of a young girl who lost her mother far too young. I believe it was her mission in life to buoy up the World, infusing it with the same 'old French romantic' sensibilities that held sway in her heart."
–  Gregg Davis writes just the other day (May 2021): "It is odd to reflect how much Alyce Victorine Grillet means to me. ﻿I spent almost no time in physical proximity to her, indeed we were only on the same continent for a couple of weeks. We communicated through email about many things. Through my own research, I learned of some her many accomplishments; this, for example: https://www.dcmilitary.com/tester/tenant_profile/lgbtq-employees-share-their-stories-for-national-coming-out-day-event/article_9168854e-531c-5ac8-a77e-812b3cfd4e36.html . After her death, [we] heard from some Navy Chiefs that she was the finest Officer they’d ever worked for and with.
"For my own experience of her as a catalyst (and she was one), she brought me across many boundaries- intellectual, mental, and spiritual."
–  Update October 2021: Scott Glendening writes,
"Thanks for the article. Every year I light a candle on the date of her death. This year will be no different.
"She grew up in New Orleans. I was her first boyfriend. We were both 15 and both our first loves. Her father was French with a European view of sex. I spent the weekends in her room as we, being teenagers, enjoyed being teenagers. Roaming New Orleans and listening to the alternative eighties:" XTC, "English Settlement," is still the band that brings back the memories. "Making plans for Nigel."
"She had many admirers and was poly before the word even existed. She was always beyond her years and I learned so much from her.
"We lost touch over the years as we both married and she moved away for her career, but we were friends on FB. I cannot express my sadness to you knowing that she is no longer with us. That headstone will always be on my mind, and I look forward to seeing it in person."
--------------------------------------------------
–  In August 2021 the Washington Post magazine ran a long feature article about the Congressional Cemetery's Gay Corner, which continues to grow in size and attention: Love and death: The legacy of Congressional Cemetery’s ‘Gay Corner’. No mention of Grillet.
_________________________
Don't miss Polyamory in the News!
SUBSCRIBE by a feed, or
SUBSCRIBE by email
_________________________