Liberal churches face up to polyamory... or don't

The national homepage of the United Church of Christ (UCC) two weeks ago presented this article: Focus is on consent, welcome as church studies polyamory (May 7).
The article revolves around a webinar led by the UCC’s Minister for Sexuality Education and Justice, Amy Johnson. It was part of series of webinars for facilitators of Our Whole Lives (OWL), the acclaimed set of comprehensive sexuality education programs that the UUC and the Unitarian Universalist churches jointly run for kids at several grade levels, as well as for young adults and older adults.
As seen above, the notice for the event included the logos of both denominations. But only the UCC seemed proud of it. And thereby hangs a tale.
First, here's the entire text (for historical purposes in case the original ever disappears):

Focus is on consent, welcome as church studies polyamory

By Hans Holznagel
“In the United Church of Christ we say often, ‘No matter who you are or where you are on life’s journey, you’re welcome here,'” said Amy Johnson. “…Do we really mean that?”
She was talking about something not often spoken of in church: committed romantic relationships involving more than one person.
A Canadian study was the focus of this latest episode in a monthly webinar series sponsored by the UCC and Unitarian Universalist Association.

Those relationships — and welcoming the people who are in them — were the topics of a May 5 webinar, “Consensual Non-Monogamy and Faith.” Johnson, the UCC’s minister for sexuality education and justice, was its moderator.

The webinar (1-hour video)
The one-hour discussion focused on a study of polyamory by the Canadian Unitarian Council. The webinar was the latest in a monthly series on sexuality education presented jointly by two U.S. denominations: the UCC and the Unitarian Universalist Association. It can be viewed now on YouTube.

‘Ethical polyamory’
The executive director of the Canadian church, Vyda Ng, said two things prompted the study. “One of our ministers came out as being polyamorous … and that created a little bit of a reaction,” she said. “At the same time, we had been getting questions and requests from our ministers and our lay-trained chaplains about how to handle requests for self-created rites of passage for polyamorous people.”
The result was a two-year task force study. Among other things, its 21-page May 2020 report:

• Defined polyamory as “the philosophy and practice of loving more than one person at a time, romantically and/or sexually, and doing so with honesty and integrity.”
• Called polyamory a “general term” encompassing “many forms of relationships.” “Some people we spoke with consider polyamory to be an identity, like gender and sexual orientation,” the report said. “Others think of it as a lifestyle or behavior choice. There is not a consensus about this within the community.”
• Emphasized that “ethical polyamory” involves consent, covenant and respect among all people involved.
• Recommended that Canadian Unitarian Universalists “not just tolerate but welcome, nurture, and support polyamorous people and their families as integral parts of our spiritual communities.”
• Noted that Canadian law prohibits rites that bless polyamorous relationships.
• Acknowledged that “polyamory remains a difficult concept for some to understand or accept.”

Already present in the church
“Polyam people and their families have always been here,” said Shoshanna Green of the Unitarian Church of Montreal, a task force member who summarized the report during the webinar. “They’ve always been in our culture, they’ve always been in our society, and they’ve always been in our UU congregations, whether or not they were public about it, whether or not anyone outside their families knew.”
The webinar also featured Gabriela de Golia, who is preparing for ministry in the UCC as a member in discernment in the Southern New England Conference. She summarized a paper she wrote on polyamory for a UCC history and polity class at Union Theological Seminary.
She admitted her research was limited, involving just 95 UCC respondents. She nonetheless concluded that consensual non-monogamy “is an existing and significant reality in the UCC.” She also said many of the polyamorous people she spoke to “don’t feel supported enough to admit their relationship status or share their interest in these topics within UCC contexts.”
Therein lies the challenge, said the Rev. Michael Crumpler, a UCC minister who directs LGBTQ and multicultural programs for the UUA. “The main goal of a faith community is integrity and love and openness and acceptance,” he said. Recognizing that consensual non-monogamy exists, he said, “is another opportunity to practice welcome” and “begin to have language to support people, which is the whole point of why we come together in faith communities.”
A justice issue
The Canadian report concluded that “affirming the validity of polyamory and welcoming polyamorous people is both a justice issue and a religious duty.”
“Whatever form it takes, ethical polyamory is fundamentally grounded in covenant and in mutual respect among all partners,” Green said. “Ethical polyamory is not the same thing as cheating, it’s not the same thing as promiscuity, it’s not the same thing as authoritarian, patriarchal polygamy. And, obviously, not every polyam relationship lives up to the ideals of ethical polyamory, any more than every monogamous relationship lives up to the ideals of ethical monogamy.
“But every intimate relationship has the potential to bring joy, spiritual growth, and mutual support in daily living.”

Meanwhile, the head office of the other denomination in this thing, the Unitarian Universalists, has long been skittish about polyamory in their midst — despite the UUs' highly liberal reputation — ever since 2004 when media glommed onto the poly presence at the annual national UU General Assembly. The group UUs for Polyamory Awareness was created way back in 1999 when there was maybe an excuse for the denominational headquarters not knowing what this was about. But that stopped being an excuse long ago. UUism has a reputation among its ranks for feisty local churches and a timid (or perhaps consensus-hobbled) national headquarters: the Unitarian Universalist Association (UUA), based in Boston.
For decades the UUA has led boldly on LGBTQI+ rights and inclusion and many other progressive issues. But other sexual and relationship minorities? The UUA has sometimes seemed embarrassed by them, scared of ridicule from outside, and maybe wishes we would just go away. However, poly activists at the 2015 General Assembly did get the UUA to formally add "family structure" to its list of non-discrimination clauses.
Opinions differ among different congregations. If your triad or quad walk into your local UU church of a nice Sunday morning, you may be warmly welcomed as such, or not so much. To find out, simply ask. Each UU congregation is self-governing (the UUA explicitly exists to serve them, not govern them), and direct questions are respected and encouraged. 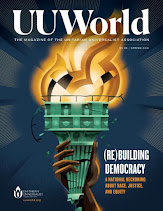 So I wrote to Christopher Walton, editor of the UU World, the UUA's official denominational magazine, pointing out this nice article about a UU endeavor on a different denomination's homepage. I suggested he consider reprinting it on the World's website.
He wrote back with thanks for the idea and says they'll discuss it. I'll update here with any developments.
Update August 22: No developments. I'm writing him again.
Update September 11: No response yet to my second note.
-----------------------------------
The UCC (formerly the Congregational Church) and the Unitarian Universalists are perhaps America's two most liberal churches arising from mainline Protestantism.1 The difference between them is that the UCC is explicitly Christian, while the Unitarians are a "covenantal" rather than a "creedal" church, meaning they leave theological questions open for personal discernment rather than requiring members to pretend they believe things they actually find implausible. Thus the UUs are a healthy mix of Christians, atheists (including me), Jews, Buddhists, neo-pagans and others, all happily getting along.
But like anywhere else, a lot of people carry past trauma over cheatings — whether by partners or their own divorced parents — and are sometimes triggered by the idea of poly regardless of their other social attitudes.
P.S.: Mainstream and conservative Christian churches, meanwhile, are having all sorts of internal polyamory ferment of their own — even the doctrinally rigid evangelicals. A boatload of examples from an earlier post. And more, and especially more.
P.S.2: The UUs for Polyamory Awareness collected a self-selected survey of 170 of the people who came by their booth at the 2017 General Assembly. The results. The tl;dr: Most of the people knew and understood the polyamory concept, 14% were polyamorous, 39% gave some degree of positive answer to whether they knew of poly people in their congregation, and 64% gave some degree of positive answer to whether they thought their congregation would welcome polys who were openly out.
-----------------------------------
1. The UU and UCC churches are direct lineal descendants of the original New England Puritans, those grim, furious theocrats and witch-hunters. Some of us UUs here in Massachusetts still occupy original Puritan church properties. Say what you will about the Puritans, they did believe in congregational self-governance, both in running their churches' affairs and also in deciding church doctrine. This self-governing habit of mind helped lay the ground for the later American Revolution -- and also for moral re-evaluations that led ever farther away from Puritanism. We modern UUs provided many of the ally boots on the ground for the Civil Rights movement including some of its martyrs, we were marrying gay couples 20 years before Massachusetts first said we could, and you'll find some UU presence in almost every peace and justice thing going today. The Puritan ghosts up in our churches' dusty attics must be furious indeed, except that most of us no longer believe in ghosts either human or divine, and in any case neither kind have given us any trouble.
_________________________
Don't miss Polyamory in the News!
SUBSCRIBE by a feed, or
SUBSCRIBE by email
_________________________
[Permalink]