The vote for a new polyamory flag is done, and we have a winner.

A total of 30,827 people voted on PolyamProud's four finalist designs for a new polyamory flag, and the winner is in. It's the tricolor-and-heart design that was submitted by, we now learn, Red Howell. 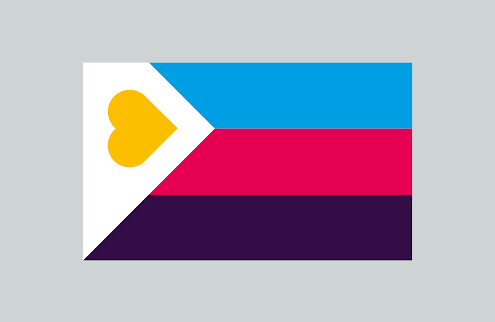 Larger, high-res version. The download page, with different versions. The color values.
Howell, a young British designer, has put it in the public domain. Here's his explanation of it:

The intention behind this design was to create a simple, bold tricolor, with a contemporary approach to traditional vexillological (relating to the study of flags) elements from the original “Pi” flag.
It takes the best of the original flag, including its color symbolism, and improves on those elements of the Pi flag which alienated viewers.
A white chevron flows outward to depict the growth and possibility of the non-monogamous community. It sits asymmetrically on the flag to reflect the non-traditional style of polyamorous relationships.
The heart reminds us that love in all forms is the core of [ethical] non-monogamy.
As in the original polyamory flag:
Red stands for love and attraction.
Blue stands for openness and honesty.
However, this redesign also makes thoughtful alterations:
Gold represents the energy and perseverance of those in the non-monogamous community.
Purple to represent a united non-monogamous community.

So there we have it, after two years. I like it. It was my own first choice of the four finalists. It's kind of growing on me.
No one pretends this project was in any way official. The idea of the PolyamProud folks was to come up with catchy, meaningful, professional-quality alternatives to the much disliked Pi flag from 1995, then put them to a broad vote by the community. Of the dozens of new polyamory flags that people have created in the last decade, none have yet emerged from the pack. The 11-member group took the initiative to collect flag designs that were in the public domain, and to recruit poly designers and flag buffs to create more. They recruited a globally representative committee to make a first cut, and presented the four finalist designs for a 22-day public vote.
Criticisms of the process included the lack of finalist designs displaying the infinity heart, our best-known symbol, and the fact that the selection committee presented only four finalists. Kristian of PolyamProud addressed these issues in my previous post, and Dee Morgan has copied that discussion to the PolyamProud blogsite.
I bet we'll see a lot more of the tricolor-and-heart in the next few years; within hours, PolyamProud's Instagram announcement of the winner had over 18,000 likes.
Will it ever become as widely known, and therefore as powerful and useful, as the rainbow Gay Pride Flag, the Trans Pride Flag, and others have become in their communities? Could happen... if people choose to use it.
_________________________
Don't miss Polyamory in the News!
SUBSCRIBE by a feed, or
SUBSCRIBE by email