Reasons to be Cheerful department: Today (Wednesday November 23) is Polyamory Day, whose origins are explained below.
But first, please share out the pic below, or one of the others with links further on, across your social and let's get this going, even bigger than last year. For polyamory visibility and recognition. 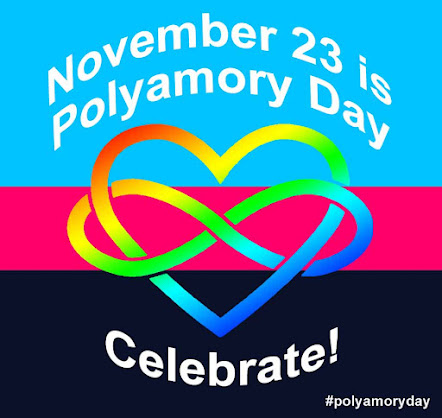 Click for full size and resolution.
Get it in Spanish, French, German, Portuguese, Dutch, or Italian
The backstory:
For years people floated ideas for an appropriate Polyamory Day, but nothing happened. Then in 2017 the Canadian Polyamory Advocacy Association (CPAA) took the initiative by declaring, with a press release, that November 23 would be National Polyamory Day in Canada, and the idea spread. In 2018 they repeated the announcement for not just Canada but worldwide. It spread further in the next several years, with other activists picking it up and running with it. By 2019 it was going around in French, Spanish, Portuguese, German, Dutch, and Italian. 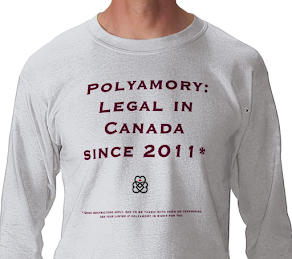 Why November 23? This is the day when, in 2011, a British Columbia Supreme Court judge ruled that Canada's anti-polygamy law does not apply to modern polyamorists, if they do not try to make a group relationship a formally sanctioned group marriage (polygamy). Previously, according to the law, three or more people merely living together in one dwelling "conjugally" could be sentenced to five years in prison, although no prosecution had been brought for many decades. The CPAA worked to make the favorable court decision happen.
But eleven years later the origin is fading into history, while the day is becoming a thing worldwide. Let's make this happen!
----------------------------------------
Here's from the press release CPAA just put out:

More shareable images are in the Gallery of the new site polyamoryday.com.