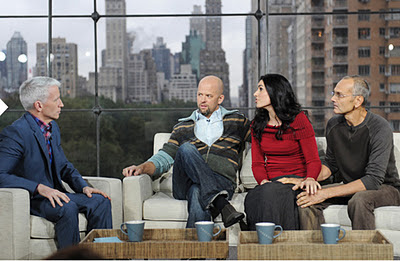 A few days ago, fresh off their appearance in the November Details magazine, the vee triad of Jaiya Ma, Jon Hanauer and Ian Ferguson were bubbling about being interviewed in New York by CNN's Anderson Cooper. Cooper does a nightly news show ("Anderson Cooper 360°") and a daytime talk show ("Anderson"). He's one of the most-watched news/talk personalities on television.

Today (November 3) Jaiya, Jon, and Ian appeared on the daytime talk show telling about their MFM family, how they got together, the toddler they birthed and are raising, whether they share a bed (you knew he was going to ask that, and they were ready), and what their poly ideals are all about. The host also brought on a former date of Ian's who said it was too weird for her. They excelled when responding to an audience member concerned about their child.

Judging by the clips on the show's website (I didn't see the show broadcast), I would say they did us proud — animated, expressive, confident, fun to watch, on-message — a credit to our image. Shows like this are making the concept known and understood to the world at large. They reveal to poly people who are still isolated that they're not the only ones on Earth. And for the rest of us, I think these things are gradually making it easier to be out.

Here's the web page for the episode, with five video clips from the interview; scroll down the page. The official blurb:

Anderson talks to an extraordinary family in which the woman has two boyfriends. Anderson explores whether or not a polyamorous relationship can work when a child is involved, and the audience speaks up.


This is Episode 1039. I don't find full show anywhere online (unless you're viewing from Canada; thanx to wolf_of_thor). But the website's clips cover 7 minutes of the interview, topic by topic.

Here's a separate video the site put up, on their home life:

Also on the site are a couple of polls: Can you be emotionally connected to two people at once? and Would you date someone in a polyamorous relationship?.

The show even posts a link to the triad's How To Love Openly page promoting their upcoming free video, "The 4 Keys to Transforming Jealousy." You can sign up there for their newsletter.

Next up? Look for the three on CBS's Inside Edition. No date yet.

Most people don't know that Anderson Cooper is son of Gloria Vanderbilt -- a descendant of the Cornelius Vanderbilt who was one of the country's first multi-millionaires. She was a bit of a libertine herself, a bohemian. (Ours is not the first generation to try to take on institutionalized norms.) Anderson may have felt more affinity for you than you suspected.

That was great. Many thanks to Jaiya, Ian, and Jon for being so articulate and courageous. No person is perfect, but I feel that they did a great job representing the community to (what I feel safe in assuming was) a great deal of people who've probably never heard of, or really known what polyamory looks like. If more of us polyamorous folk were more open about it, and people got to see first hand that it isn't about being sex-crazed maniacs, and that we're probably better educated, and ethical people as a whole, there wouldn't be as much misinformation, ignorance, or prejudice around the subject, and we would all benefit.

I can see the gears turning in Anderson's head. He's getting ideas that he just might like! LOL