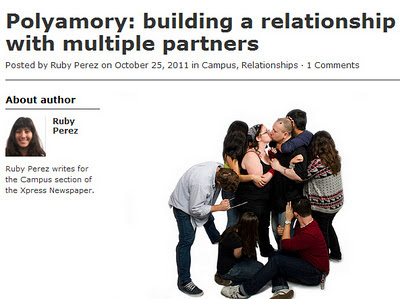 "This is my poly dream: that every college student in America will know the word polyamory and what it means within five years." So declared Diana Adams at a Loving More conference 3¼ years ago.

More progress has happened in this direction than I expected at the time. As the poly universe grows, its average age definitely seems to be trending down. For instance, the fastest-growing poly site on the internet right now (as far as I know) is reddit/r/polyamory, with 4,800+ members and another thousand every few months. Reddit is mostly twentysomethings.

Here are some recent college newspapers picking up the topic.

1. In the Golden Gate Express at San Francisco State University:

Most people won’t declare “Just so you know, I’m not monogamous,” as SF State senior Emily Irving, 21, does.

Irving is in a polyamorous relationship with Philip Russo, 36, who introduced her to the lifestyle. They have been together for three years. [They pose in the center of the photo above.]

...“I really liked him and I thought that, maybe if I didn’t understand the idea of it at first, a few dates couldn’t hurt me,” Irving said. “I went out with him and we talked about it more and I really liked the idea of being that unrestricted and un-smothered in a relationship.”

Irving then entered a serious relationship with Russo, who at the time was already seeing two other women. She then began living with Russo and one of the women, which she described as a challenge.

...“It’s very much about trust. It’s not like monogamy where I trust you not to go falling in love and sleeping with other people,” Irving said. “But that I trust you to be an individual and do whatever you like to do because I know you trust me just the same.”

...“The main point is that it’s not so much about sex but it’s about falling in love with people. In monogamy, you can’t tell someone if you’re attracted to someone because that’s not what you’re supposed to do,” Russo said. “We talk about it. Polyamory is about openness, trust and communication.”...

2. In Q Magazine at Yale, "Yale University’s only LGBTQ-interest publication":

...The essence of polyamory [stands in opposition to] what has been called a “starvation economy” of love. For econ majors, this might make sense. If I have an apple, and I give it to someone, I no longer have an apple. I can’t give it to anyone else. This makes sense with finite physical resources, and it underlies the practice of monogamy. If I love my partner, I love ONLY my partner. The problem is that love is not finite. Polys (as practicers of polyamory tend to identify themselves) generally believe giving and receiving love only increases the stores of love to go around. The same way that making a new friend does not necessarily decrease the quality of your old friendships, polys explore multiple loving relationships with the full knowledge and consent of everyone involved.

...While there is no “typical” practice of polyamory, a local practitioner describes his love life as an example of one of the many ways to be polyamorous. Nick, the founder of an online support group for polys, is a heteroflexible man in his mid-twenties.... Everybody involved knows as much as they wish to know about everyone else. In fact, Nick gets along well with the other boyfriend. For this group, polyamory has been fulfilling everyone’s needs well so far.

...You might be thinking, “That sounds awesome, why doesn’t everyone do this? Where can I sign up?” Or, you might be scoffing, “That could never work. People get jealous. It’s too complicated.” Either reaction has some truth to it....

...[T]he cardinal rule of polyamory: communication. Every single person involved needs to be explicitly aware of the expectations. Not every relationship within a network has to follow the same rules, but each individual must simultaneously follow the rules of all of their own relationships....

3. In The College Voice at Connecticut College:

...While many people consider non-monogamy to be limited to religious extremists and misogynists, the fact of the matter is that polyamory is a growing trend all over the world.

As long as you are open and honest with all involved individuals, then I do not see the problem. All three of you seem to be extremely comfortable with a polyamorous relationship. The only concern that seems to be holding you back is the social stigma that surrounds non-monogamy. In my view, that should not keep you from being happy. Be warned that you will be fighting an uphill battle: from the inability to be recognized in a Facebook relationship to other forms of discrimination, we do not live in a society that accepts polyamory as a valid form of a relationship....

4. A pro-con debate on polyamory at Bishop's University in Quebec:

One love or big love?

One of the first lessons I learned as a naive first year student, was that boys here don’t like to be tied down.... And contrary to gender stereotypes, there are a ton of girls out there who would rather play the field than settle down with one partner. But is this really a bad thing? Does our society attach negative stigmas to people who seek multiple lovers? The answer is yes, undeniably so.

That’s why the debate held on October 18th in the Gait attracted such a large audience. The debate, organised and mediated by Dr. Jessica Riddell, was centered on this controversial statement: “Polyamory is a more responsible, honest approach to relationships in the twenty-first century.” Upon entry, all audience members were given definition flyers, clarifying the meanings of the terms polyamory, polygamy, monogamy, and monoamory. (To sum up; terms ending in -amory relate to non-marital relationships, and terms ending in -gamy relate to marriage). Dr. Michele Murray of the religion department and student Chris Carmichael argued for polyamory. On the other side, Dr. Bruce Gilbert of Liberal Arts and Philosophy and student Adria Midea argued for monogamy.

Midea kicked off the debate with what threatened at first to be a typical puritanical moral argument. However, things became more interesting with the implication that traditionally polygamous relationships have been in-egalitarian and harmful to the self-esteems of women. On the other side, Dr. Murray clarified that polyamory was not to be confused with “cheating,” since all parties involved are aware of each relationship. Her argument stressed that polyamory should be an option for those who wish to “explore different behaviours,” not that it should be compulsory. Dr. Murray also pointed out that polyamory gives people the opportunity to deal with their jealousy head-on, thereby accelerating personal growth. It is of course debatable (no pun intended) whether jealousy can ever really be conquered. And, as Dr. Gilbert rebutted, whether overcoming the very flaws that make us human is even a noble goal....

...Then came the final audience vote. Although the monogamy side did get more votes in the end, it seems that the polyamory side were able to double their supporters since the pre-debate vote. I personally found both sides so convincing that I abstained from voting in the end. All in all, it was a very thorough and successful debate, and one hopes we can forward to more in the future.

5. In a debate in "Britain's biggest student newspaper, serving Greater Manchester," a polyamory supporter steps up to correct someone unclear on the concept. The "Polyamory" float photo is from the 2009 San Francisco Pride Parade.

6. In The Daily Kansan: A self-proclaimed poly student who falls in love with people easily, yet has sex with none, writes that she still gets called a whore. Such is the rule in a culture where intimacy must be walled off from the rest of life.

In the summer of 2009, Amy Thompson, a sophomore from Shawnee, went on a study abroad trip to Besancon, France where she discovered she preferred polyamory to monogamy. Polyamory is the practice of having multiple committed relationships at a time with the knowledge and consent of all who are involved. She kept an open relationship with her boyfriend of two years while abroad.

I had a man for every day of the week when I was in France. While abroad, my only goal was to speak French. Dating someone turned out to be the best way to learn the language because I was always talking to that person. I had that dynamic multiplied by six, plus the long-distance boy back home.

...I’m in love with everyone I meet.... Polyamory forces me to communicate honestly with my partners. We talk about our limits.....

A lot of my friends told me what I was doing was immoral. The word “whore” was used to describe me. I didn’t have sex with any of those guys, not that it would matter. They [my friends] abandoned me for a lifestyle that made sense to me.

Labels: college, millennials, The Next Generation