I've expressed concern that the word polyamory could lose its meaning as it spreads into careless general use. Here, an advice columnist corrects the same thing happening to compersion, another word that used to be in-group jargon but is becoming more widely known and employed.

"Sasha" is a sex-advice columnist for Toronto's big news-and-entertainment weekly Now. She has been writing her column for 17 years.

Readers weigh in on the complexities of poly relationships 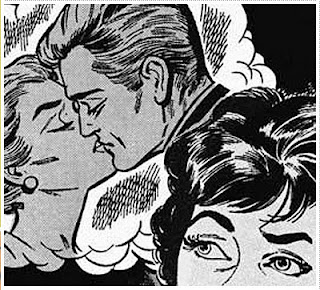 I was quite disconcerted with your reply to Desperate Puppy, so much so that I feel compelled to respond....

Fantasizing about one’s spouse having sex with someone else is not just a guy thing. A few years ago you replied to a woman who, while having sex, continually imagined watching her man having sex with another woman. I believe she said it was the only way she could reach orgasm. It sort of changed my life....

There’s a relevant term that my wife and I came across while further exploring this particular fantasy, “compersion,” which we found in Tristan Taormino’s book Opening Up. Yes, there could be an element of selfishness to it, but I assure you it’s not a macho thing. You might want to research it.

...As I understand it, compersion is not the same as fantasizing about your partner fucking someone else and wanting all the gory details to expedite your own fantasies.

Compersion is often defined by polyamorists as the opposite of jealousy. One of the distinguishing qualities of compersion might be the profound relief you feel that you’re actually not exploding with jealousy at the idea of your partner having sex with someone else. While you may very well be happy for your partner, you’re also happy that you aren’t feeling like you want to collapse from heartache. It’s the wondrous sensation of a truth being revealed to you that defies the one you’ve been told all your life.

And it’s extra-awesome because you sought that truth out on your own, despite some pretty intense obstacles.

What Desperate Puppy’s boyfriend wants seems more along the lines of using his boyfriend as a lightning rod for a fantasy he has about watching him fuck someone else. He doesn’t want to be happy that his boyfriend is fucking other men. He wants to be

>One of the distinguishing qualities of compersion might be the profound relief you feel that you’re actually not exploding with jealousy at the idea of your partner having sex with someone else.

Wow....Finally after a few years, a definition of "Compersion" I can actually understand and get along with!
Thank you Sasha and Happy New Year Alan!