Two days ago I put up a bunch of student-newspaper articles about polyamory. Continuing the theme, here are some more Next Generation items I thought were especially interesting. This is nowhere near complete.

This went up 18 days ago and has had 50,000 views. This and more like it are the answer to Diana's deadline in my previous post.

2. A young freethought activist — and great writer — describes his amazing newbie introduction to poly in a piece that's gone viral: 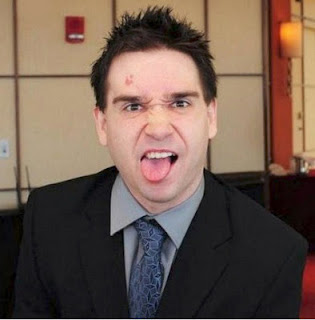 ...I’m still pretty much a kid trying to figure things out (while trying to be responsible at the same time). I try new things and I make mistakes, and I have no problem telling people about it because I hope that nudges others to be more shameless about who they are.

...So, today I’m going to try and demonstrate what I find to be admirable behavior by being honest, sharing a story that changed my mind about something, and saying to hell with the consequences. I’m going to tell you about having sex with a married woman.

At Skepticon last year I met a woman, Christina, who would go on to become one of my closest friends thanks to the magic of the internet. Christina and I had quite a great deal in common and a lot of the same curiosities about life. I felt very fortunate to have made her acquaintance.

I knew she was married and soon found out her marriage was polyamorous — i.e., both Christina and her husband had sex with other people.... Sex was not a taboo subject for Christina. She spoke about sex as casually as discussing what to have for dinner, which at first made me slightly uncomfortable. Not in an “oh my gosh that’s wrong” way, but in a way where I thought “ok, if that’s what fills your sails, but it’s not for me.”

Sex is a magical topic. It’s so interesting that with the proper approach its introduction can save almost any boring conversation. And, as two fairly open-minded people, our conversations eventually turned to what we liked in bed. We both were meticulous in our avoidance of diseases, but there were some stark differences between us. I liked giving back rubs. Christina liked having meat hooks pierced through her back and being suspended by wires. I wanted to be in a threesome one day. Christina had lost count of how many she’d been in. She began to call me naive, a charge to which I almost immediately pled guilty (by comparison to Christina, what choice did I have?). She then told me we should have sex.

“We’re polyamorous. You know that,” she responded....

“Is your husband really ok with this?”

...And like that we were walking into her house. Within seconds Chris, her husband, came over to give me a hug. He seemed genuinely excited to see me. He didn’t seem awkward at all!.... I sat down in the kitchen and Christina and Chris went about making dinner. As nonchalant as a man ordering a cheeseburger he asked me how I was. I’m a fan of honesty almost all the time, so I decided to come out with it.

“I’m good. I admit though, I’m a little uneasy about this. I’ve never…um…y’know…been physical with a married person before.”...

We proceeded to talk over dinner about polyamory, about Chris’s girlfriend, and about physical fitness. It was actually very pleasant. Chris and Christina hugged and kissed – they were a perfectly adorable couple. Finally, it came time for Christina and I to excuse ourselves....

...And we cuddled all night afterward.

In the morning we got up and made breakfast. Christina kissed Chris, and this whole fucked up situation finally resonated with me as closer to normalcy.

Over the course of the day Christina told both Chris and me that she loved us. I later asked her how that was possible, and she told me that love is not like a bathtub; somebody doesn’t need to get out to make room for someone else. I had honestly never thought about it that way.... There are really people who can love freely — and I don’t just mean sex. I mean honest, genuine love. And I think that’s beautiful....

We’re a funny lot, Americans. We use sex to sell everything in sight, but we want to act like prudes when it comes to the actual subject and treat sex like it’s something to be ashamed of or cannot be used as a means to entertainment....

...Love is not a bathtub. I’ve learned a lot from Christina and Chris, but chief among them is that I am polyamorous and would have been much sooner if not for a bunch of wonky societal myths. And so I write blog posts like this, because that’s why we come out. We come out to normalize something we think are awesome in order to dispel those myths....

This piece has been spreading so widely (such as by Andrew Sullivan's blog on The Daily Beast) that a writer for The American Conservative used it as the basis of an article, The Mainstreaming of Polyamory (Nov. 22, 2011), in which he warns darkly:

We’re going to be seeing a lot of this, I bet. People who have nonjudgmental attitudes about sex deciding that the only thing keeping them from violating taboos is fear. And when that is conquered…

Conservatives' biggest fear often seems to be that other people will overcome their fear. Maybe that's because conservatives' brains tend to have overgrown amygdalas, although biologist P. Z. Myers disagrees ("I really resent the foolish categorization of the functions of these brain regions").

...At 21, I’m still the youngest poly I personally know. The gap is narrowing, but it’s still there and was even more noticeable when I first started moving in poly circles at the age of 19.

So what does this mean?

A lot of the time, absolutely nothing.... I have many wonderful friends of all ages, and the ages of the people I’m currently involved with on any level span a range of about 20 years. It doesn’t matter.... The same is not true for how other people feel, unfortunately — I’ve lost count of the amount of times I’ve been informed that my beloved Nomad is ‘taking advantage of me’ purely because of the 15-year gap in our ages, or that I have been ‘brainwashed’ in my youthful innocence to believe that something as out-there as polyamory is actually okay. As though I need rescuing from my own choices.

...The problem is that being young means essentially that everything I do tends to be written off as a phase.... I can virtually see people wondering when I’m going to grow out of it. Well, I wonder instead how old one has to be before one’s life-choices are not written off as ‘a silly phase?’

Because I’m sure many things about me will change as I get older. But being bi and poly are facets of who I am, and I am increasingly sure they will not change.

Whatever people might think, though, I am truly happy that I discovered this lifestyle, the kind of life that suits me, when I was young....

Me, I discovered what's now called poly at 17 and felt pretty sure my life had changed forever, though I knew I wasn't in a position to convince others of this or even myself. Now that I'm 60 I can say yep, I was right.

The Freedom To Choose Your Pronoun

...“These teens are fighting the idea that your equipment defines what it means for you to be a boy or girl. They are saying: ‘You don’t know me by looking at me. Assume nothing.’ ”

Dr. [Ritch C.] Savin-Williams [director of the Cornell University Sex and Gender Lab], who is also the author of the book The New Gay Teenager, went on to list some of the new adjectives young people use to describe themselves: “bi-curious,” “heteroflexible,” “polyamorous” and even “wiggly.”...

Labels: millennials, The Next Generation

FYI:
It looks like Taboo is going to air the poly episode Jan 3rd in the US NatGeo channel.

The Lakota Sioux popularized this, though in a slightly different cultural context. In teepees. All night. My teenage daughter volunteered on a Sioux reservation in South Dakota where the older boys proudly showed off their huge scars, and some were eager to do it again.

I had already told her fatherly things like, "If the cool kids were jumping off a cliff, would you do that too?" Maybe she'd been listening; she came back without scars. The things parents are glad they didn't hear about till later....

"Me, I discovered what's now called poly at 17 and felt pretty sure my life had changed forever, though I knew I wasn't in a position to convince others of this or even myself. Now that I'm 60, yep, I was right."

I am the same way. I've never thought in a monogamous manner. Even through much of high school I was dating more than one girl at a time, with both of them knowing I was dating the other. I didn't have something to call it then, but it was the way I was and nothing I wanted to change. It just felt "right" for me.

**Chuckles** I'm kinky and have been in poly relationships before, and may be again. I've no problem with poly...meat hooks however, drawing the line at that thank you very much!

Once again Alan you present some great stuff, keep up the wonderful work!