Meg Barker is a lecturer in psychology at the UK's Open University, a sex-and-relationships therapist, a much-published researcher, co-editor of the journal Psychology & Sexuality, and for many years a poly-awareness activist. She's co-organizer of the UK's annual Polyday and the cartoonist for its website.

Barker has now brought out a deeply radical self-help book: Rewriting the Rules: An Integrative Guide to Love, Sex and Relationships (Routledge, September 2012). It's radical in that it guides readers to discern roots: to dig up unexamined social assumptions that govern your relationship life, look at them in the light, and decide which to keep and which to remake. 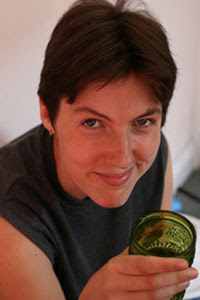 This book takes various key aspects of relationships and, for each one, explores what the existing rules are and why they might not always work so well. It then considers people and groups who have stepped outside those existing rules and what they are doing, exploring what we might learn from such alternatives. However, it also explores the limitations of any new rules and how they can become problematic themselves if held too rigidly. Finally, it explores a third alternative to either grabbing onto existing rules or desperately seeking new ones. This involves staying in the uncertainty of not having clear rules and finding a way to go on which doesn't require grabbing hold of anything.

If that sounds a rather tall order, in reality it means that at least we try to notice when we are grasping onto rules and thus attempt to hold them more loosely.

To illustrate how even the most freethinking people unconsciously take unrealistic templates as their standards, she writes:

We have an image of a normal relationship in our heads in the same way that most people, when asked to draw a picture of a house, draw pretty much the same thing as one another. Try it for yourself.

In the same way that hardly anyone lives in anything that looks remotely like this picture [you just drew], so none of our relationships look much like our idea of 'normal'. 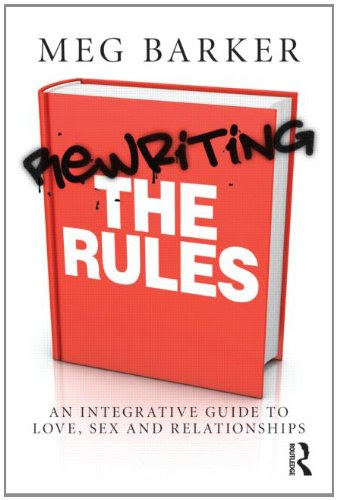 In nine chapters she leads the reader in examining and rewriting the rules of your self-identity; of who you should be attracted to and whom you can attract; of how love is to be done; of sex; of gender; the choice of monogamy or some form of polyamory; how conflicts are done; how breakups are done; and setting the meanings of commitment. She closes with a chapter of practical suggestions for rewriting your rules consciously. This is a deep, thoughtful book — not a quick read but something to take in bites and come back to again and again.

The book has been getting a fair amount of media notice. In the UK's Guardian newspaper for Nov. 9, 2012:

...[Barker] isn't suggesting that we junk monogamy, rather that we realise that long-term monogamous relationships as currently configured aren't so much fulfilments of love's young dream as disasters waiting to happen. In such circumstances, mere monogamy surely cannot bear so much weight.

Should we adjust our parameters? Should we pursue what relationship counselors call the poly grail? Does sex matter to the health of a long-term relationship? Is it OK to give it up?

"We increasingly look for lots of different things in one place – namely the monogamous relationship," says Barker. Why? "Because we have become more and more atomised, work has become more precarious, community bonds have weakened and there has been a decline in religion, so we hope to get everything from one other person."

How important is sex in a long-term relationship? Barker says many of the couples who come to her seeking sex therapy expect that she will teach them how to have the great sex they had at the start of their relationship or have never previously enjoyed. "Sex is our whole idea of the barometer of a relationship's healthiness. So sex becomes this imperative. It needn't be."

...Is she saying it's OK not to have sex in a long-term relationship? "For some couples that may work, but not others. One possibility I address in the book is making a 'yes, no, maybe' list of all the sexual and physical practices that they are aware of, and whether they are interested in them. That may help."

Barker counsels periods of solitude in order to work out what you want from a relationship – or if you want out. "It's easy not to think critically about what's happening. It helps to create space to reflect on what you want."...

...[Barker] says there are several differences in today's long-term committed relationships that underpin the need for change. "Number one is that people are living to be a lot older – so a long-term relationship is a much longer deal," she says. "And another thing that's changed is expectations: we require so much more from a relationship than people did in the past.

"There's been a huge growth in the recent past of this idea that you need one perfect relationship; that you will get everything from it – romance and children and financial stability and friendship and a great sex life. No other generation had such huge hopes invested in just one relationship and it is an enormous ask."

...Are all love relationships about two people? Are friendships and romances really that different? Is sex vital to a ‘healthy’ relationship? How important is it to be ‘normal’? Is there such a thing as ‘The One’? Is it realistic to promise that anything will last forever? All these questions are considered but, crucially, Meg doesn’t offer any set answers (cos that would kind of be going against the whole point, see?).

If you’re already in or considering some form of non-conventional relationship, whether non-monogamous, kinky, queer, asexual or otherwise, I would also strongly recommend this book. As Meg herself points out, people who challenge conventional rules can often make the mistake of grasping onto their own alternative ‘rulebooks’ as tightly as do those in the communities they left behind. This book tackles that, offering plenty of practical tips for working out what you really want and how you can make sense of that with the people in your life, without getting drawn into just another role that doesn’t really fit.

In a particularly brilliant passage, Barker uses her experience of place and time to suggest analogously a different way of thinking about the value of maintaining constancy within relationships, and thereby to question the universal value of monogamy and life-time commitment:

I think about my own relationship with cities. When I moved out of London, for example, I found that London and I were much better together when we were in a long-distance relationship than when we rubbed up against each other every day.

Consider times of day: I used to have a relationship with the time between midnight and two in the morning: a loose, rumpled time of fuzzy edges, drunken camaraderie with strangers and greasy gutters. We broke up and I hardly ever see that time any more, but I do have a new relationship with the time between six and seven a.m.: it is a sharp, silvery grey, raw and empty time, but I am growing to love it.

Such passages are genuinely subversive in their at once light and suggestive, yet ideologically devastating, destabilization of the dogmas by which so many live — and suffer.

Barker then explores how in fact, there are continua in regard to how much sexual and/or physical contact a couple has, how close they are emotionally to one another and to others outside their relationship, how much they might disclose, what sort of boundaries they have, how much freedom people in relationships have, and so on. She writes that where problems may occur in relationships is that people assume that they are at the same place on the various continua, and then discover that they are not. It turns out that the assumptions they thought they shared were not shared at all.

...The unrelenting order of each chapter got a bit tedious: what are the rules, why question the rules, alternative rules, and beyond the rules. Whereas this may be a good structure for a presentation, I found that it forced the author to state the obvious too many times.

Some chapters worked particularly well; the chapter on sex, the one on commitment and the conflict chapter were excellent, perhaps because she negotiates these tricky areas very skillfully and with a good deal of openness to their wide range of possibilities. In other chapters, such as gender and love, the result is simplifications of very complex issues which do not go beyond the superficial.

Here are links to many more reviews and notices, at the book's website.

Most of this is happening in Great Britain. Rewriting the Rules deserves more attention here in the US.

Two years ago Barker co-produced another poly-related book, Understanding Non-Monogamies (edited by Meg Barker and Darren Langdridge; Routledge, 2010). This one is an academic collection of 25 papers and essays on styles of open relationships in various cultural contexts, poly culture in particular. The introduction, table of contents, and large bibliography are online (click "see inside").

Added December 2013: She does a TEDx talk, including the Repeating Crab Bucket phenomenon versus Embracing Uncertainty (12 minutes).