"How polyamory is saving some couples"


Maybe I'm grumpy today, but I've got a bunch of problems with this nice, well-meaning article: 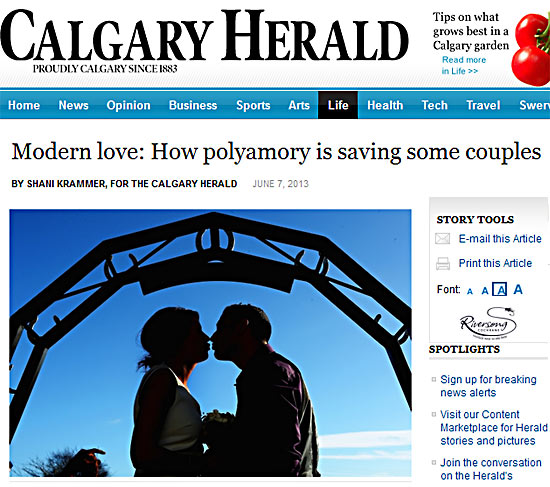 Let's start with the headline.

1) "Marriage in trouble? Add more people!" is an eyeroll snark in the poly world. (It's even a Poly Bingo square.) Yes it occasionally works — maybe in an otherwise good, companionable marriage where one person has strong special desires, or sexual dislikes or inabilities. (As a friend of mine in a 16-year triad says, "Some people get into poly so they can have more sex. Some get into poly so they can have less sex.") But more often, the add-more-people cure for a troubled marriage bombs spectacularly.

The newspaper writer might have done a little more research and said, "The standard advice you hear in the polyamory world is to get your present relationship into excellent condition before even thinking of opening it."

2) Even if the poly cure works for a couple, what about the third party? If it's about saving the couple, is the third just some kind of kleenex to come into? Some secondaries seek out the role because it fits their life they way they want it: as a solopoly free agent. Many don't. Either way, secondaries have feelings too.


3) All of this exposes issues of couple privilege and polynormativity that most readers of the Calgary Herald and Edmonton Journal (in Canada's red provinces) probably haven't seen discussed much.

But on with the story:

Modern love: How polyamory is saving some couples

Going outside of a monogamous relationship is far from the norm, but experts says such arrangements can work if everyone involved is committed and communication is kept up.

By Shani Krammer, for the Calgary Herald

Two years into their marriage, David and Alyssa were struggling with their sex life. Alyssa felt unsatisfied and David felt he couldn’t meet her needs. Rather than break up, however, the couple decided that Alyssa would start having sex with other men.

That was six years ago. The couple, whose names have been changed in this story to protect their privacy, says their new arrangement may seem strange, but it works for both of them. Alyssa’s sexual needs are fulfilled, and David says he finds it sexy to think about his wife with other men.

“We keep things creative and we’re always trying new things,” he says. “Alyssa wants to push it further to see what happens. A lot of people just do the same things (sexually) over and over and it gets boring.”

This kind of relationship, sometimes called polyamorous, is far from the norm, but relationship experts says such arrangements can work if everyone involved is committed and communication is kept up. Those involved say their lives are proof that not everyone needs to adhere to society’s traditional approach to monogamy to be in a happy relationship.

David says he and Alyssa’s relationship takes jealousy and conservatism out of the equation. He knows this might seem strange to an outsider, but he and his wife are happy with their current agreement.

“We talk about things we want to do beforehand, and question it, and try things out to see what the person likes, and then we do it,” he says. “Our relationship is messed up in comparison to what other people do, but we’re happy. To me it’s fine.”

...“We are monogamous as far as the relationship is concerned,” David says. “She’s only having sex … She doesn’t have relationships with other guys, it’s just sex.”

4) So, that means their marriage is "open" rather than "polyamorous." Sex on the side with touch of cuck, rather than multiple love relationships. I wish sloppy journalists wouldn't gum up our defining word! Two OKCupid commenters nailed it a few days ago. Said one:

To which another added,

"Or deep relationships with multiple people. Someone can have a deep and intimate relationship where their other partners are not really involved." Journalists please take note.

5) Anyone who says out loud that jealousy is "out of the equation" steps into the crosshairs of the Karma Fairy's bombsight. I say this as a low-jealousy person who didn't get whammed with it until 13 years into my poly life.

...Kate Nielson, a Registered Psychologist at the private practice of the Family Psychology Centre, says society has slowly begun to embrace what she refers to as “alternative relationship styles.” Some spouses she has encountered are bisexual and they allow one another to have sex with both genders, while some couples agree to allow sexual relationships with others.

...She says that, to be polyamorous, there must be ample communication, and both spouses have to agree on the openness of the relationship.

...She says that monogamy and polyamory are both valid relationships styles, but it takes a lot of communication to figure out which style works the best. In polyamory, she says both members must agree on the terms and rules; for instance, there is full disclosure of all extramarital sex, and the who, the when and the where of these encounters. These types of couples have a sense of openness and honesty, so they don’t consider it cheating.

...Noel Biderman, CEO of Avid Life Media, the founder of the website Ashley Madison, a dating site for people looking for extramarital affairs, says the success of the site shows that cheating is more natural for people than society has traditionally allowed.

Biderman founded his website on the principle that humans are not naturally monogamous. He says that, based on research done by his company, married people are more comfortable lying to their spouse and keeping extramarital sex a secret, and he doesn’t think polyamory is a realistic idea.

“About one to two per cent of people (surveyed) were into the polyamory,” he says. The rest of them said they were more comfortable cheating without consent, because there was less likelihood of judgment or possessiveness on the part of their spouse.

Biderman says that sometimes experimenting with new lovers illicitly can rekindle the original love within a relationship, and actually cause people to appreciate their souse even more.

“The majority of marriages survive infidelity,” Noel Biderman says. “There’s this myth that you should pick up and leave.”

Psychologist Kate Nielsen, however, says that, given the choice, polyamory is a better option than cheating because it promotes honesty.

“There is always the possibility that cheating could bring a couple closer together, but usually that’s an exception. Usually, that trust is broken (when a spouse cheats). It can be very hard to regain trust once it’s been broken,” Nielsen says....

Agreed. This take makes me sick!

Polygamy can be positive if it is practiced in a modern context. Here a sociologist gives her take on it: http://www.youtube.com/watch?v=erTwhTCAAss

The example cited in this article is not true polyamory, as the wide is not fully engaged in a deeply loving relationship with men other than her husband.

On the other hand, it's pretty clear that the couple is sexually incompatible with one another and that opening up the marriage to other people (preferably mutual friends) can and often does keep a marriage alive. In my opinion, it's certainly preferable to a divorce -- especially in today's economy.

My wife of six years and I are in an open marriage; we're not sexually compatible with each other, either. Divorce would destroyed both of us financially as well as emotionally, thus not being strictly monogamous is, for us, a blessing.