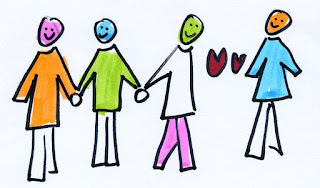 It doesn't always happen, of course. But as polyfolks have long known, when one romantic partnership is fulfilling, the goodness tends to spill over to benefit other romantic relationships, as a new study finds.

First, a short report on the study in PsyPost, a psychology news feed:

New research on consensually non-monogamous relationships indicates that having one partner who meets your sexual needs is linked to increased satisfaction not only in that relationship, but also in a concurrent relationship. The study was recently published in the Journal of Social and Personal Relationships.

...The study of 1,054 individuals in consensually non-monogamous relationships found evidence that sexual need fulfillment in one relationship could “spill over” to another relationship. The researchers found that having sexual needs met by one partner was associated with greater satisfaction with another partner.

“In the future, it would be ideal to look at need fulfillment (beyond sexuality) across relationships. So how does perceiving a partner as motivated to meet your needs influence your relationships with friends and family members?”

The study has some limitations.

“One major caveat is that this sample includes people who are consensually involved in multiple relationships, it does not suggest benefits to non-consensual additional relationships,” Muise noted. “One question that needs to be addressed is why perceiving one partner as responsive is beneficial for (or detracts from) another relationship — Are people having more needs fulfilled, etc?”


● As reported in more depth on the feminist site Bustle: Non-Monogamous Couples Who Are Satisfied In One Relationship Are More Likely To Be Happier With Another, Study Finds (June 18)

So in the poly context, it's not a competition. The authors don't go here, but I will: Compersion in humans is normal and, when societal conditions permit, fairly common.