"Many Love" poly author is in today's New York Times, on the eve of her wedding

Sophie Lucido Johnson, whose sweet, self-illustrated poly memoir Many Love came out this summer, is getting married tomorrow. And she tells the tale in the Style section of the New York Times . (Update: It went online October 12th but appeared in the print edition of Sunday the 14th.)


Talking to My Fiancé About My New Girlfriend

After enjoying an open relationship, a couple decides to tie the knot. Just one question: Why must marriage require sexual fidelity for life?

Luke came to my front door in New Orleans on a sunny day several years ago with a sparsely decorated cassette tape and said, “I made this for you.” I could tell this was a move he had used with other women, but I had to hand it to him: It was a good one. ... I was charmed that Luke liked music and was obstinately analog about it. ...

...Two years later, we moved from New Orleans to Chicago and rented a one-bedroom apartment. ... But I never wanted to give up dating other people, and neither did Luke. In Chicago, we maintained our Tinder accounts and would lie side-by-side in bed swiping right, occasionally showing off our respective matches.

Polyamory wasn’t something my parents easily understood. My grandparents told me they felt “truly worried” for me. But nothing about our arrangement ever felt unusual. ... Before Luke, I had spent almost a decade building and prioritizing a close platonic friendship with my roommate, and she never minded that I went on dates with other people. Why should it be different with someone I slept with?

...Sometimes I got jealous; sometimes Luke did. We talked about our jealousy at length and afterward felt closer. Three years into our relationship, we kept dating other people, but we noticed that the jealousy just kind of stopped. In the spring, Luke filled our living room with yellow daisies and we got engaged.

The next winter, at a party, I met Kat.

She wore a skintight black dress with see-through keyholes on the sides. I couldn’t stop staring. She was the most beautiful woman I had ever seen in real life.

She was there with her boyfriend, Brendan, who was visiting from Portland, Oregon, and they were also polyamorous. I liked Kat and I liked her boyfriend ... finally Luke told me I should ask her out.

I decided I would ask her out by writing her an actual letter and sending it. The letter had a long list of possible dates and times when we might hang out, and I drew cats on the front of it to indicate how whimsical and carefree I was. ...

People ask me why I’m getting married, considering my open approach to sexual fidelity. ... I’m getting married because I want to promise, in front of my friends and family, that I am going to love Luke forever. I want to assure him that if he can’t pay his rent, or when someone he loves gets sick, or if his car breaks down in an ice storm and he’s stranded on the highway, that he can call me and I’ll be there for him no matter what. ... More than anything, I want Luke to know that I will tell him the truth, and that when the truth is painful I will stop what I’m doing and tend to him until he feels better.

But I am not going to promise him that our love won’t change, and neither will he promise that to me. The fact that love absolutely will change is one of my favorite things about love. Rather, as the love changes, I hope Luke and I will be able to hold each other with compassion; that we will stay curious and empathetic.

One night, after a December evening out, Kat walked me to the train station. Under the overpass, she pulled me toward her and kissed me in a small, sweet way that threw my stomach into knots. ... Talking with the love of my life about falling for Kat has been an incredible gift. Luke pets my hair and lets me wax poetic in a way that most of my friends can only tolerate for so long. And it goes both ways; I root for him when he goes on dates. Kat says she talks to her boyfriend about me, too.

Right before Christmas, Luke and I went to Portland (my family lives there; we always head over for the holidays) and met up with Kat and Brendan. We all went on a date together. After it was over, Luke and I lay awake in my childhood bed, laughing about how sweet and strange and beautiful our lives were turning out. ...

I know not everyone wants to love this way. I understand fear of loss, and I understand wanting to hold something still when it’s good. Ultimately, this particular shape makes sense to me: love as a blob that can’t be pinned down, as something alive, an animal that ventures from person to person but finds places to call home.


● More from the author: an excerpt from the book published by Refinery29, How Friendship Can Be Just As Intimate As A Relationship (June 27, 2018). In part: 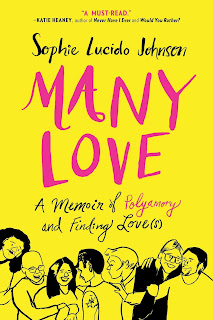 ...We agreed to float a little ways down the river, using our forearms to keep ourselves gently tethered to the ground. We reached a place where the water was deep, but a red maple had fallen across its narrow width. We both grabbed hold of the tree so we could stay in one place, tumbling like wind socks in the current.

By the time we fixed ourselves to the tree, Hannah and I had already spent three hours talking nonstop. The conversation rolled forward unpredictably. There were no lulls or awkward pauses; the things we wanted to say turned up without announcement, and then we broke off into other topics altogether.

Women are especially good at this, psychiatrists Jean Baker Miller and Irene Pierce Stiver point out: they engage in “connective” conversations — conversations that are uniquely healing, and, unfortunately, critically absent in public discourse. According to Miller and Stiver, connectivity occurs when both people are equally invested and share the emotional weight of the conversation’s experience. "Connection in this sense does not depend upon whether the feelings are happy or sad or something else; it means having feelings with another person, aside from the specific nature of the feelings."

Conversation with Hannah was long and easy because we were not seeking solutions to our problems. In discussing the pleasures and pains of our daily lives, we constructed reality together. ...

Sometimes I don’t need a solution nearly as much as I need to be told that whatever crazy thing I’m feeling — terrified of going to sleep at night; palpably angry that my local bagel shop has run out of poppy-seed bagels; in love, unconditionally, with people who can’t love me back — is an okay thing to feel. I’m constantly amazed at the ways in which our world believes that uncomfortable feelings are abnormal and should be avoided or fixed at all costs. Hannah never tries to fix my problems; she sits with me in their shadows, engaging with the darkness.