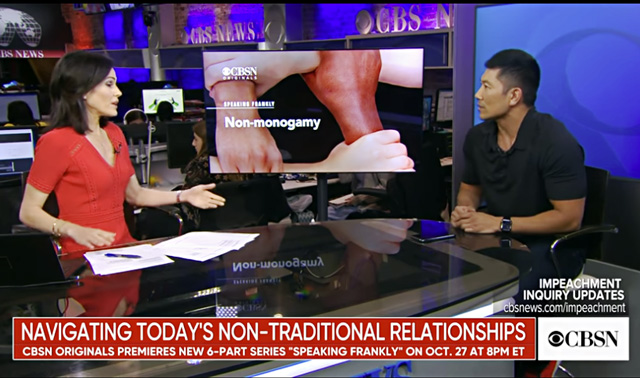 They've already put up the 23-minute main body of the documentary and the three segments of studio discussions that follow it. You can watch the complete hour of the show's material here:

It's interesting to see here that Helen Fisher, famous researcher and author on the nature of romantic love, has finally recognized that polyamory is a real thing. She used to dismiss it as impossible due to her theories about human exclusivity. It's nice to see a social scientist change their theories to fit reality rather than blow off a reality that doesn't fit their theories.

My overall impression? The show looks to be good for us. It explains the concept well to the many people who are still, even now, discovering us for the first time. But because it centers the stigma problem, many of the polyfolks spotlighted come off as kinda defensive or even scared.

Excerpts from the transcript:

But people who have practiced non-monogamy for years say it's not all wild sex — or even all that wild. It takes a lot of work, and it carries a lot of stigma. There can be serious consequences for the family life and even careers of those involved.

"Many people are trying to create families in different kinds of ways. And a lot of people see that as dangerous," Diana Adams, a Brooklyn-based lawyer who represents polyamorous families, says in the CBSN Originals documentary, "Non-monogamy."

She advises clients in non-monogamous relationships to be careful about telling their employers. She's seen some lose their jobs over it.

...Mahdy, a man who lives in Brooklyn, New York, had to end his marriage to keep his relationship together. He is part of what's called a triad or thruple — a polyamorous relationship between three people who are all actively involved with each other. But because it's illegal to be married to more than one person, only two people in his triad can be married.

Mahdy, who did not want his last name to be used, met his first partner about 14 years ago and married her in 2011. One year later, the couple met another woman, and the three formed a triad. But it could have fallen apart after the second woman ran into problems with her immigration status, he says.

For her to remain in America, Mahdy and his wife divorced, and the wife married the second partner. It kept them all together — but he is still reeling from the ordeal.

"Dissolving the marriage … that was really, really difficult for me," he says. "I don't have the legal protections I had when me and my first partner were married. In fact, I don't think I've had health insurance since."

For many people in non-monogamous relationships, there's nothing strange about their arrangement. It's just romance — plus one or two other people, or more.

In 2018, Houston formed a triad with CJ and Brandi George, a couple who have been in an open marriage for four years. She has a sexual relationship with both CJ and Brandi — sometimes individually, and sometimes all together.

...Brandi said that years ago, someone wrote an anonymous letter to the school district where she works as a teacher, outing her for being in an open relationship. ... "I was terrified that I would be let go from my job or that I would have people that wouldn't accept me," she said. "My students, like, they give me oxygen, they give me life. And so to have that taken from me would have just like devastated me. So I was just very aware that that could happen and that I would have nothing. And how could I provide for my kids if I don't have a job?"

Some non-monogamous people can't be open about their situation at all. ...

"Finding love and/or sexual intimacy is a central part of most people's life experience," the APA website says. "However, the ability to engage in desired intimacy without social and medical stigmatization is not a liberty for all."

People who engage in or support non-monogamous relationships argue that it's simply an option that should be available for those who choose — just as monogamy should be an option. And for now, they're just asking for acceptance.

"It's never gonna be equal for us," Mahdy said. "I only ask that people don't interfere with what we have."...


● Here's a 5-minute promo about the show with host Tanya Rivero, titled The challenges of polyamory and non-monogamous relationships. The blurb with it: "The new CBSN Originals documentary 'Speaking Frankly: Non-monogamy' explores a way of life that's more common than you might think. But maintaining a non-traditional relationship carries stigma and presents some special challenges. Executive producer Adam Yamaguchi joined CBSN with more on the story."


● Another video: Rivero interviews Diana Adams, founder of Diana Adams Law & Mediation and the Chosen Family Law Center. Adams gets a solid 10 minutes to stay her stuff, and damn, is she good at this! This is the best interview I've ever seen her do. (BTW, her haircut make it clear that these news videos were filmed at a different time than the main documentary.)


● Rivero also sat down with Elisabeth Sheff for this segment, called "Children of Polyamorous Relationships."

"Dr. Eli Sheff, an expert on children in polyamorous families, discusses what these children report about growing up as part of a non-traditional family unit."


● Another news video by Rivero: "Dr. Amy C. Moors, the co-chair of the American Psychological Association's non-monogamy task force, discusses the state of research around non-traditional relationships and polyamorous families."


Watch for updates here after the show itself airs.

UPDATE AFTERWARD: Well, the full 1-hour version tonight consisted only of the videos above: The 23-minute in-the-field documentary I called the "preview," followed by the in-studio discussion videos, one after the other with ads between.

Impressions? I have to say I come away with a less-good, possibly even dark view of the show after watching the whole thing in one go.

I realized one difference: This time I was paying more attention to the background music. Much of it was chosen to be sad or ominous, to go with the problems people were saying they faced (fears of job discrimination, coming out to family, child custody, etc.) Was the background music supposed to evoke sympathy... or did it lend an air of problems and sadness about trouble to the whole subject of multi-relationships?

At least, I see that that's how skeptics may take it. I'll be interested in your reactions.

One thing, though: When I first posted about the show, I said it looks like a link you might send your parents. I've taken that out.

It also seems to only have shown triads. If nothing else it could have discussed the importance of STDs and how it impacts all relationships. Non-monogamy, polygamy?, is just another relationship style. :/ I think simplifying partners as a species was a health benefit to protect against STDs and now science has caught up with us beautifully and we can return to polyamory as long as we're careful.