● Trigonometry "is a love story about three people who are made for each other," BBC Two has announced. Sounds promising! The 8-episode TV series has been in the works for two years, it's nearing completion, and it will air in the UK in 2020 (no dates yet). We can hope it will also become available worldwide for the rest of us.

Yesterday, RadioTimes.com ("the UK’s fastest growing TV and entertainment website") published Exclusive: BBC Two polyamory drama Trigonometry reveals first-look pictures (Dec. 14, 2019). Only the stills there are new; the BBC issued a press release about the show's selection two years ago (BBC Two announces new drama series Trigonometry by Duncan Macmillan and Effie Woods, Oct. 4, 2017) and another about the cast choices six months ago (Cast announced for new BBC Two drama Trigonometry, June 14, 2019). This text is from those, the pix below are from RadioTimes:

Trigonometry has emotional and psychological truthfulness at its heart. Funny and full of sexual tension, Gemma and Kieran have everything to lose. As this unusual relationship becomes unavoidable, the trio approach it with the prudence of people in their 30s. Is it possible to love in a different way? But even when common sense, friends and family are telling them that this complicated relationship is doomed, Gemma, Kieran and Ray simply can’t be apart.... 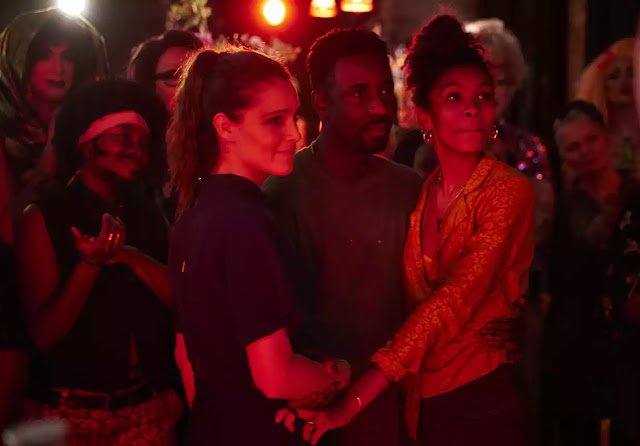 Piers Wenger, Controller of BBC Drama, says: "Duncan and Effie’s unique and beautiful scripts demanded three extraordinary, honest and fearless actors to play their leads. And I am delighted that in Gary, Thalissa and Ariane, they have met their sweethearts."

...Thalissa Teixeira says: "I'm totally overwhelmed by all of it, the scripts, the shoot, the people. I’m so happy to be a part of this exceptionally original story." 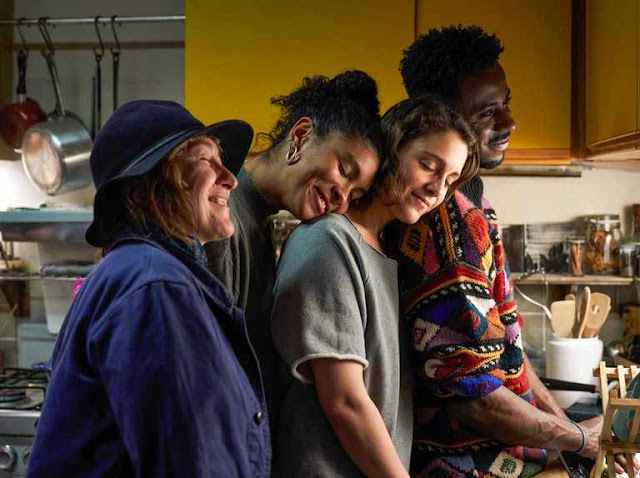 House Productions joint CEO’s Tessa Ross and Juliette Howell adds: "We are thrilled that Arianne, Gary and Thalissa have brought the characters in Duncan and Effie’s exquisite scripts to life in such a beautiful way. Working with two hugely talented directors, Athina Tsangari and Stella Corradi, they have given us something very special, creating a thrilling and palpable on screen chemistry which makes this feel truly exceptional."

Trigonometry is produced by House Productions for BBC Two. ... The producer is Imogen Cooper (Hatton Garden, The Windsors) and the transmission date will be announced in due course. BBC Studios will handle distribution for the series.

From Wikipedia: BBC Two "tends to broadcast more 'highbrow' programmes than the more mainstream and popular BBC One."


● Three Californians held their group-marriage ceremony last Sunday the day after a UK tabloid gushed all about it: Polyamorous throuple wed in three-way ceremony where both brides walk down the aisle (Daily Star, Dec. 14). 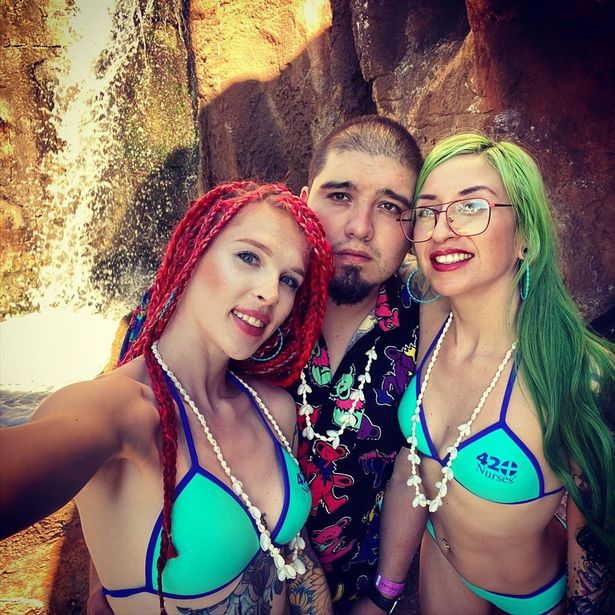 The trio, who have been dating for seven years, live together and sleep in the same large bed.

They hope the wedding will take their relationship to the next level – although proceedings won’t be legally binding.

In an exclusive interview with Daily Star Online, the triad spoke about their plans ahead of their big day. ...

If you think you've seen these people before, you have. Remember the 420 Nurses? The trio have worked the tabloids on three occasions now by my count, probably for decent money, while not letting themselves be made into a freak show instead of the fun-loving avant-garde crew that the tabs' readers probably dream of having been if only they had the wits to break out of their pathetic lives.


Hailey Gill and Shay Thomas are both non-monogamous, and they told Business Insider that there are lots of misconceptions about having more than one partner.

For Gill, a social service assistant for the National Guard of Oklahoma, said that although polyamory is often seen as completely sexual, for her it is about connecting with multiple people in a romantic way.

She added: “I am more inclined to look for romantic partners than I am to look for sexual partners. [Polyamory] is a way to bond and share your love with more than one person and to show everyone a caring partner.”

YouTuber Ari Fitz, who has been polyamorous for two years, previously told PinkNews that she enjoys developing feelings for multiple people at the same time, and said monogamy was too restrictive for her. ...


Includes a vid of Fitz telling what she's learned from her poly life.

● Three days later from Insider: What cheating really looks like in polyamorous relationships, according to people who are in them (Dec. 19). "A polyamorous person can cheat on their partners by ignoring agreed-upon boundaries about dating others."

BTW, that would be breaking a rule, not a boundary. "Rules" are things you agree to with others or require of others. "Boundaries" are things you set around your own self and personal space, not your insecurities. The diff is crucial, and if you don't get it, you need to.


● Meredith Goldstein, the star advice columnist in my hometown Boston Globe, handled a monogamous reader's question well — after an increasingly serious dating partner waited way too long to give necessary information: I didn’t know he was polyamorous (Dec. 16). Meredith answers,


People live polyamorous lives in all sorts of ways. If you read up on what it means to be in an ethically non-monogamous relationship (and I'm sure you've done some googling, at the very least), you'll learn that the word "consent" comes up a lot (as it should). A big part of it is about everyone understanding and accepting the terms. That kind of sharing of information hasn't happened here, but two months in, with bigger feelings on the line, it needs to.


● On the subject of not-so-ethical nonmonogamy, this appeared in Paste: Moses Sumney Shares the Dark Side of Polyamory on Stark New Single, "Polly" (Dec. 17).


“If I split my body into two men, would you then love me better?” he asks, softly, vowing to “octopus myself so you weather this.” The lyric video is no less stark: Sumney looks directly into his webcam, silently weeping.

Yes, spreading yourself too thin for the hearts you claim to love is indeed a known problem thing. "Are you dancing with me/ Or just merely dancin'?/ ...Am I just your Friday Dick?/ Cornucopia of just-in-cases...."

There's a common saying, "In poly you don't have to choose!" But in poly and all life you're always choosing, and anyone who claims to love must take guidance in their choices from goodness.

For those family holiday visits coming up, here's a collection of useful stuff: Poly during the holidays — tales, warnings, recommendations, assembled by me a few days ago.

Each week, I'll try to close with something that's particularly useful from the poly community itself. Suggestions welcome. Mailto: alan7388@gmail.com.

See you next Friday, or sooner if stuff comes up.