● Polyfolks do the Tamron Hall show. Yesterday five of our fine representatives went on the new Tamron Hall daytime TV talk show, which is syndicated to stations by ABC/Disney and reportedly has 1.3 million viewers daily. Kevin and Antoinette Patterson and their polycule partners Chrissy Holman and Pace, plus open-relationship psychologist Dr. Justin Clardy, held forth for about 11 minutes during the second half of the one-hour show.

So far the show's website has only 1½ minutes of the video up (and it's not embeddable here as best I can tell). But a friendly person got low-res video of the whole thing by pointing her phone at the TV for the three segments between ads. At that link: Left, Antoinette and Kevin start off alone. Bottom right, Justin Clardy came next. Top right, all four partners close it out. Too bad they got so little time as a group of four.

Our day was bananas. Talking to a mostly non-sympathetic audience of over one million people about polyamory wasn't an easy task, but we did it. Live. That took a lot - make no mistake. I am drained and I'm sure my Phillycule is, too.

I am proud of us. We did our best with what they gave us, which wasn't much, but we made lemonade and will continue to do so. Hopefully this is a catalyst for many future conversations. Let's normalize and destigmatize non-monogamy. It's clear given their questions and assumptions that there's much work to be done. I'm here for it.

My personal mission is simple - make polyamory inclusive, center folks at the margins, and make polyamory as BORING as possible. My dream is to pick up a book or see a movie where there are polyam folks of all races, genders, abilities, and orientations... BUT... it's a non issue. No one even bats an eye. It becomes a non-issue."

...There's so much love and compassion, and this is what we need. I hope others can have the same love and support we're so blessed to have."

● In Dan Savage's "Savage Love letter of the day," a sad and oh-so-typical crisis of a poly-mono couple who married five years ago without discussing and learning of their basic incompatibility on like, maybe, the second date? Much less before getting married? At least there are no kids yet. She Can't Do What He's Asking Her To Do — So What Should She Do? (Jan. 21).

All I want to do is to cheat on my husband of five years, whom I love passionately. My husband is intelligent, goofy, athletic, respectful, adventurous, and intellectually curious. We share the same values, sense of humor, and hobbies. We have great conversations and amazing sex. But I’m always falling for other men, which has never diminished my love for my husband. Crushing on other men is exhausting, thrilling, and miserable. I hate the unavoidable blushing, ear-to-ear smiling, crippling guilt, and occasional panic attack. (Compounding the misery, I can’t giggle with anyone about my crushes since I’m a married lady. I instead repress everything, which feels horrible.) Two years ago, I thought I had a solution: severing ties with all my male friends and acquaintances. This ended badly. ...

My rant: When I got into polyamory-awareness activism 15 years ago, the concept that multi-relationshipping could be successful and joyous was practically unknown. A life mission I privately set for myself was to help make it a cultural norm that when a dating relationship turns serious, the question "Do you want us to be open or closed?" is right up there with things like "Do you ever want to have kids?" Rather than just assuming that of course everybody who's worthwhile always turns monogamous, there's no other way except being a rat, no need to ask.

And not just no asking, no cultural room for telling. Even in the most intimate soul-relationship of your life.

I'm kind of amazed that, as early as 2020, this discussion has gone from culturally unthinkable to a fairly widely known wise thing to do — across much of the Western world and beginning to spread elsewhere (India, Russia, Japan...). Too bad this couple failed to get word that they could and should, you know, talk.

Both plays have been going around for two or three years; see my past posts for Transcend and PolySHAMory. From those SF Chronicle reviews, 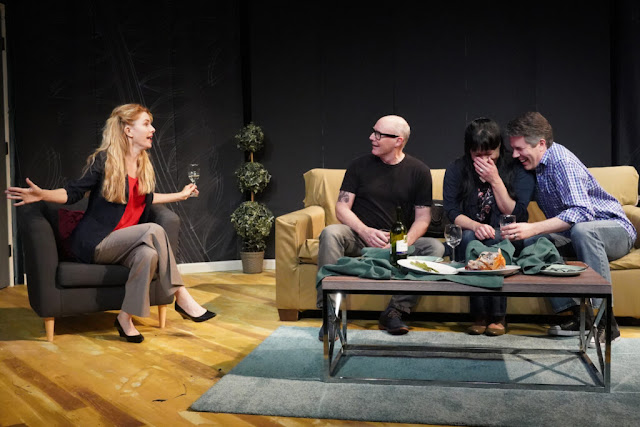 [How to Transcenda Happy Marriage]   Take all your feelings about matrimony and monogamy, in all their contradictions. ... Maybe you revere the way present-tense love can stretch forward and backward in time while you also chafe at the limitations of giving your whole self to only one person. Maybe you’re curious about what other modes and loves are out there but too afraid to admit it or explore what that means. Maybe all that affection and lust you feel — for your partner, but also friends, co-workers — resist the compartmentalization the world demands.

“How to Transcend a Happy Marriage” acknowledges all those feelings and then, miraculously, stages a kind of ritual that makes them all OK. 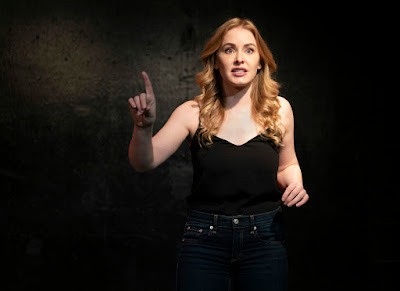 [PolySHAMory]   Kate Robards recounts how a Cinderella story of a wedding devolved into a nightmare of a marriage. She describes the nightmare as her relationship’s particular breed of polyamory, but you can imagine members of the poly community questioning her use of the label. In Robards’ telling, her now ex-husband drives each step of the pair’s decision to start looking for “paramours,” as she fakes enthusiasm in return — sometimes hilariously, her words drying up, no more sound squeaking out — or awkwardly acquiesces.

If polyamory is supposed to come from a superabundance of love, receptivity and openness, Robards incarnates her ex, Josh, as a meathead prone to glossing over pain and complexity with a “Hey, babe.” ...

So is Robards a total poly-basher? Well, no. From an interview with the Chronicle January 7th:

Q: I was wondering if with the word “sham” you had any worries about reinforcing simplistic stereotypes about polyamory.

A: I’ve had a lot of people who are polyamorous come to my show, including friends … and they were like, “We get enough of a hard rap for this, and we don’t need one more person telling a bad story about it.” But I have to remind them that as an artist I have a point that I’m getting to and ideas and questions which are unanswered to me, which I want to explore in the piece, and they get that.

...Anytime you do anything autobiographical, I think you have to tread the line of being respectful to the communities and the people you speak about. … I make sure to use my “I” statements. It’s my personal story. It is authentic and it is autobiographical. I make sure not to delve into the other people’s perceptions, the other characters’. It’s just my point of view. It’s truly a monologue. 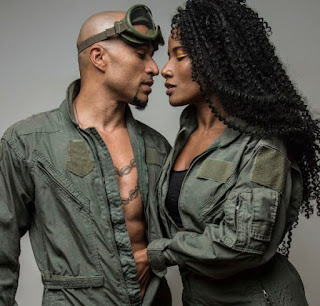 Although polyamory is neither new nor revolutionary, the increased buzz around it brings forth a slew of questions around how polyamorous people and communities appear within mainstream media. As others have rightfully highlighted, coverage largely focuses on polyamory’s white middle class practitioners, creating the impression that polyamory simply isn’t for people of color. But even when larger media outlets specifically highlight this issue, their analyses always stop short of simply acknowledging that yes, people of color, and black people particularly, practice polyamory. Such coverage is useful insofar as it provides a platform for the conferences, online communities, and books that have emerged specifically by and for black polyamorous people. However, it still begs the simple question: how does it work? ...

● Metamour Day this year is gonna be a Thing! It's February 28, Valentine's Day times two. And as told here last week, the National Coalition for Sexual Freedom (NCSF) is throwing its weight behind making this take hold in 2020 after a good start last year.

NCSF says its purpose for Metamour Day is "honoring polyamory's most distinctive relationship," as well as

to foster acceptance and heighten understanding of consensual non-monogamy (“CNM”), strengthen the CNM community, and create awareness of the NCSF mission.

In an effort to broaden the reach and celebration of this holiday, we encourage you to spread the word and host an event for your community. Some of our supporters are hosting parties, others are participating in our greeting card contest (details on the website), and using our hashtag #MetamourDay2020 on social media to promote the occasion. We would love to hear about what you do so we can share in the fun and boost Metamour Day now and into the future.

Eventually, we want to create an archive of information and examples of the fantastic things our constituents do to acknowledge this important relationship. Additionally, if you need any participation from us, we are happy to help. Please let us know if you’re interested by reaching us at metamourday@ncsfreedom.org at your earliest convenience. Please visit our website, https://ncsfreedom.org/metamour-day-2/, for more information.

● And before that comes #PolyamoryWeek, February 9 – 15, though I'm seeing less momentum there so far. Yet people do keep putting up graphics on Instagram.... 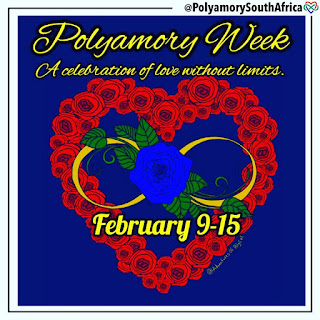 See you next Friday, or sooner if stuff comes up!