Yes, the dam is breaking. The exploding reaction to the polyam 'House Hunters' episode 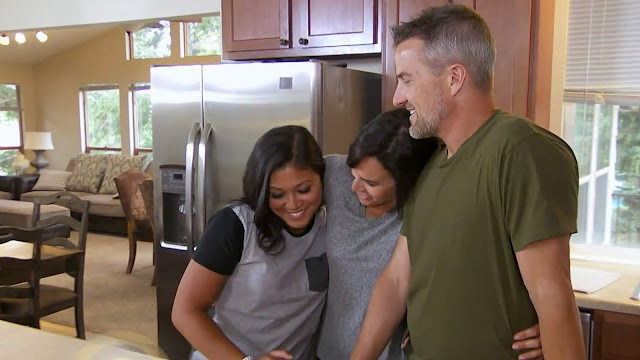 Last week I reported about the Home & Garden Channel (HGTV) — usually the picture of middle-American blandness — featuring a triad with two kids on its "House Hunters" episode February 12. The trio were looking for a house with a "throuple-size kitchen" and a master bath with, ideally, three sinks.

Media outlets have leaped on this as an Event. I assume this means polyamory coverage brings them serious clicks.

The entire 24-minute episode has been popping up on YouTube and elsewhere and keeps getting taken down. Good luck. I don't find it yet on the House Hunters official site.

Here's a short video that People magazine added to its original breathless article that I already posted about, HGTV Features Its First-Ever Throuple on House Hunters: 'Representation Matters' (Feb. 13. Yahoo News has also reprinted that article and several of the others here.)


This morning (Feb. 20) another clip became E! Online's Clip of the Week, and from there it was picked up by MSN:


Many stories about the episode — many of them positive to enthusiastic — started appearing hours after it aired, and now the conservative/religious condemnations have also begun.

● On the website of NBC News, What's a 'throuple'? 'House Hunters' episode puts polyamory on the radar (Feb. 14)

Viewers of HGTV’s popular show “House Hunters” this week watched in shock — with a bit of awe — as a polyamorous “throuple” searched for a new home in Colorado Springs, Colorado.

“Buying a house together as a throuple will signify our next big step as a family of five, rather than all four of them plus me,” said Angelica, referring to her partners Lori and Brian and their two biological children. ...

During Wednesday’s episode, Brian revealed the trio tied the knot, so to speak, a few weeks ago in Aruba.

“In this country, of course, you can only be married to one other individual, so we joined with Angelica in a commitment ceremony,” Brian explained, adding that he always knew his legal wife, Lori, was bisexual. “This has nothing to do with church and state; it’s a commitment between the three of us. We are all equals in this relationship.” 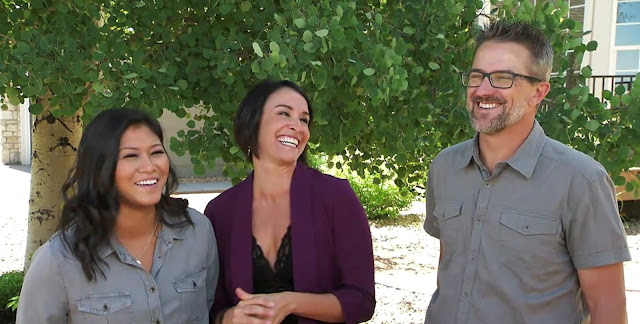 By Thursday, “HGTV House Hunters” and “polyamorous throuple relationship” were trending search terms as viewers reacted to the triad with a mix of amazement, confusion and horror.

...A number of Twitter users questioned the practicality of the polyamorous homebuyers.

“The throuple on hgtv wants a room that fits all three of them and three sinks in the master bathroom,” one woman wrote. “Aint no body have a move in ready house with THREE SINKS.”

...Others said that they saw something of themselves in the throuple. “I think a lot about how in the hell I would ever find a house that would suit the family I envision myself someday having, so this House Hunters throuple thing is pretty dope actually,” tweeted Kat Veldt. “It's cool that people are talking about housing for families that aren't traditional nuclear structures. Love to see it.”

...At least one viewer, however, flagged the precariousness of Angelica’s financial and legal situation, since she, unlike Brian and Lori, has no legal status in the relationship.

“Unfortunately, if something were to happen, only one of those women has a legally recognized relationship, so they might in their heads think they are equal, but that third one is going to be left out in some way,” Ed Stein, a law professor at Cardozo Law School, told NBC News. “She lacks legal protections in the case of death or divorce or other problems, and that's why there's a need to do something to protect her.” [True. –Ed.]

Stein has for decades studied nontraditional relationship structures and how they relate to family law. Decades ago, these beyond-the-legal-pale relationships were gay partnerships, but after same-sex marriage was legalized across the U.S. in 2015, Stein turned his focus to other legally unrecognized relationships, like throuples.

Consensual nonmonogamy, which includes polyamory, is not uncommon, according to a 2016 study out of Indiana University published in the Journal of Sex & Marital Therapy, which found that over 20 percent of the several thousand U.S. adults surveyed reported having at some point in their lives experienced this nontraditional romantic arrangement. That finding held steady across age, education level, income, religion, region, political affiliation and race, but not gender and sexual orientation: Men and LGBTQ people were likelier to have experienced consensual nonmonogamy....

Custody disputes have raised the legal implications of multiple-party relationships in states like California, where Stein said judges have ruled that more than two parties — two biological parents and step parents, for instance — were legal guardians for children.

...During the episode, titled "Three's Not a Crowd in Colorado Springs," partners Brian, Lori and Angellica ("Geli") were moving to Colorado.... The house hunt had an extra layer of difficulty with only one week to "satisfy three very different personalities."

"Lori and I got married in 2002, and we have two kids..." Brian explained in the episode. "I understood from day one, even when we were dating, that Lori was bisexual... and so we evolved to a point where we were comfortable having another woman in our lives."

Geli said they met at a bar.

"I didn't plan on being in a relationship with a married couple, but it just happened very naturally, organically" Geli explained.

...In a statement provided to USA TODAY by spokesperson Chelsey Riemann, HGTV said, "We feature all homebuyers and living choices."

The episode elicited reactions from viewers on social media, with some praising the representation for polyamory. ... Others expressed their shock. ...

...Some viewers praised the progressive representation, while others slammed HGTV for promoting the polyamorous relationship.

... House Hunters first aired on HGTV in September 1999. It has since prompted spin-offs like House Hunters International and House Hunters Renovation, among others. In the past, the series has included both gay and straight couples, though none have featured more than two partners.

...A long-standing joke about couples on House Hunters also surfaced in the conversations. Many viewers claim the relationships featured on the HGTV series are often dry or annoying. Brian, Lori and Geli won over the support of some viewers immediately.

...Other viewers were upset by HGTV's progressive inclusion. Many claimed that the idea of a polyamorous relationship is "not normal" and were stunned that the channel included their story. ...

...The three have since exchanged vows with in a commitment ceremony and are sharing the raising of the two kids, aged 10 and 12.

...At the end of their one-week search, Brian and Lori couldn’t decide on which home they liked best, so they gave Geli the deciding vote. They went with a home that was $15,000 over their $500,000 budget, but which offered spectacular mountain views – something they all loved.

● And in the queer Out Front, Polyamorous relationship featured on HGTV (Feb. 13)

...Andrew Goldberg from Peak Properties Group was the [real-estate agent] to attend to the [three house-seekers]. ... Peak Properties Group was formed by Alex Tooke and his husband around nine years ago, driven by his passion for making buying a home easy and comforting for all comes from personal experience. The group loves to help other queer folks find their homes, but serves everyone. ...

● The entertainment-industry press is full of brief stories, such as this from E! News: HGTV Features First Throuple on House Hunters (Feb. 13)

Just when you think you've seen it all on House Hunters, a show that has produced close to 2,000 episodes....

...House Hunters is an inherently social conversation-driving show, so having a throuple on it really got the commentary going. ... Some viewers embraced watching the trio search for a house.... While other viewers were a bit more snarky. "that awkward moment when you're a throuple but can only afford a $500k house," one user tweeted.

The normalization of polyamory rolls down the track, just as I and others predicted it would. It was, as I said, less a "slippery slope" than a simple unfolding of the logic of social liberalism.

● From Michael Brown in the Christian Post, Mindlessly careening our way down the slippery slope (Feb. 18).

History was made on HGTV this week when the show “House Hunters” featured its first-ever throuple in search of a home to settle down.

...The normalization of polyamory has become a topical subject in recent years with the advancement of same-sex marriage and gender fluidity. In 2019, the American Psychological Association even launched a task force designed to remove the “stigma” associated with it, even going so far to give the lifestyle its own politically correct term – “consensual non-monogamy.” ...

Former California Rep. Katie Hill continues to make her mark on progressive representation in the media, despite resigning from her position in Congress last year. ... On Saturday, Hill tweeted an article about an episode of HGTV’s show House Hunters featuring its first “throuple” in the show’s history. “You know, I’m gonna take at least partial credit for enough of society knowing this term for it to be on House Hunters. Just sayin,” she tweeted.

Hill pointed out that the article’s headline riffed off her longtime campaign slogan, too. “‘Representation matters’ has been my tagline since the beginning so I will take it,” she added.

...The term "throuple," gained significant recognition prior to Hill's resignation from her position as a U.S. representative in California’s 25th district after her personal life became irreparably public. She was part of an alleged throuple, between her, her ex-husband, and a former campaign aide.

[On stepping down she said] “I’m leaving because of a misogynistic culture that gleefully consumed my naked pictures, capitalized on my sexuality, and enabled my abusive ex to continue that abuse, this time with the entire country watching,” Hill said in a speech. “Yes, I’m stepping down, but I refuse to let this experience scare off other women who dare to take risks, who dare to step into this light.”

P.P.S.: Another sign that polyamory draws clicks: Scammers have caught on. Many of my Google Alerts for the word nowadays point to sketchy foreign URLs with off-sounding titles, which, if I click them, cause my malware blocker (Avast) to pop up "Threat Blocked."

P.P.P.S.: About that damn word "throuple," yes I know. See story with graph near the bottom of this.

None of this changes the fact that Katie Hill is abusive to her partners.