It's Friday Polynews Roundup again — for June 5, 2020. A quiet week polywise, if one of the most important weeks of our time otherwise.


Lockdown has forced polyamorous couples [sic] into monogamous scenarios that go against their ideologies [sic].
By Olivia Petter
...The logistics of a polyamorous relationship vary from couple to couple. “I have one lover,” explains Asa, “and David has one person who he sees regularly but other lovers that he sees from time to time as well.” Typically, Asa and David would only see each other once or twice a week and the occasional weekend. But spending lockdown together has brought them closer to one another.
“At the start, we bought a tantric sex book that teaches couples to intensify their sex lives in just 28 days through meditation, words of appreciation, breathing exercises, and weekly love-making rituals lasting four to six hours.” They have been keeping in touch with other lovers via WhatsApp, and meeting others through virtual orgies. “...When we saw that our favourite sex party Killing Kittens launched virtual events, I surprised David by buying two tickets for our date night – which was virtually interacting with hundreds of other people watching, enjoying other having sex – us included. It was held via Zoom.”
...According to one YouGov poll from 2015, 34 per cent of Britons believe polyamory to be “morally acceptable” while 39 per cent said they don’t think human beings are monogamous by nature. ... Explains psychologist and sex educator Dr Lori Beth Bisbey, “It can benefit people who have high self-esteem and are confident in their place in each of their relationships.”
...While polyamory doesn’t exactly lend itself to the restrictions forced upon us in a pandemic, there are ways to maintain relationships with multiple partners. One tip, says Dr Bisbey, is to make as much time to see them virtually as you normally would if we weren’t in lockdown. Don’t just stick to FaceTime, either. “Connect in a variety of ways,” suggests Dr Bisbey. “Text them, phone them, go for a social distancing walk if you can. Send each other presents in the post, like something with your scent on it, or ask their roommate to give them a hug from you.”
Crucially, she says, be kind and be patient. No matter your relationship status, these are incredibly difficult and distressing times. Being there for a romantic partner is needed now more than ever before, regardless of how many you have. ...

●  From Elisabeth Sheff, 7 Tips for CNM Relationship Maintenance During the Pandemic (June 3). CNM is of course consensual non-monogamy.1


As the COVID-19 pandemic wears on and some people re-emerge from quarantine, others remain firmly isolated at home. Even those who are no longer quarantined are facing a society deeply changed by the virus, with greater physical distance here to stay for some time.
...[Here are] tips from experts with a wealth of advice on how to sustain a healthy and happy CNM relationship during a pandemic.
1. Self-care is Relationship Care
...Zach Budd, a social worker and self-described consent warrior, affirms that self-care is critically important right now because “the entire word is in the midst of a protracted trauma… you wake up in the morning it should be the first thought you have because literally most of us aren't going to get through a week without doing something for self-care. ...” Budd recommends taking breaks from the 24/7 news coverage... exercising more, taking naps, and listening to podcasts instead of watching TV.
2. Focusing on Togetherness
Many people have found additional time with loved ones to be a benefit of being quarantined together.... but it can also become blasé. Libby Sinback, polyamory relationship transformation coach, recommends that partners “create intentional time together, even if you feel like you're together 24/7 ... making space to connect deeply and have meaningful conversations with each other.”
3. Asking for What You Want
.
..Avoid expecting your partners (kids, friends, family, etc.) to read your mind. When your needs are not being met it can be tempting to critique the person you expect to meet them, especially if it is a long term relationship that has built up its own emotional baggage. Rather than critiquing your partner for failing to read your mind, ask clearly for what you want.
Kitty Chambliss, a sex-positive open relationship coach, says, “...It is so empowering to realize that the only person we can control is ourselves (not our partners). By looking inward and examining our own thoughts and subsequent feelings, we can get in touch with our unmet needs that may be the root cause. ... This can build intimacy, understanding, and more trust and connection with our partners.”
This can be especially important for people in CNM relationships because they have fewer role-models....
4. Giving Each Other (and Yourself) a Break
Dirty Lola, a sex educator and host of Sex Ed a Go Go explains that “We also need to take a step back and realize that our decision making processes right now are colored by loneliness, anxiousness, depression, all of these things that are really not making us good decision makers right now.” ...
With fewer distractions, these mistakes might take on additional importance because they dominate the immediate environment in which everyone is already experiencing higher levels of stress. ...
5. Connecting When Apart
Dr. Amy Moors... has noticed an uptick in creative ideas for connecting online. Moors reported that her content analysis of Reddit threads revealed that there are “really creative things people are doing to stay connected… People are going on lots of virtual dates, like [the game] Animal Crossing. Different ways to do dates and stay connected. ...
6. Addressing Submerged Issues
In my own relationship coaching practice I am seeing an increase of relationships that had some issue that people were aware was problematic but never really wanted to address... These issues that were moderately irritating (at least on the surface) suddenly became unmanageable when they were magnified by unrelenting confinement. ... This could be the time for folks in these relationships to find resources, get support, get brave, work up their compassion to the highest level, and face the issue directly.
Libby Sinback urges caution when facing big issues. “...If you are finding yourself stuck in deep pain you can't move past, now more than ever is a time to reach out for professional help. ...
7. Caring for Others.
If you are lucky enough to be comfortably housed, still earning money, and making it through... it can really help to share your good fortune with others.... Zach Budd advocates for a collective response to the pandemic. “...We're all part of a human family and we are all going through this together. So we really have to try to let go of the individual’s thinking.... This isn’t just about you.” Simple actions such as wearing a mask and maintaining physical distance can contribute to community well-being, provide a small sense of control in an out of control world, and help to refocus from your own misery to helping others.
Sheff's first two articles in this series talked about advantages and disadvantages of being polyamorous during the pandemic, and social power and hierarchy in quarantine, especially around who gets to set the social distancing rules.

●  Sheff's The Polyamorists Next Door blog, where these appeared, is hosted by Psychology Today magazine. Also popping up in the Psychology Today world was this from another therapist: “I Am Glad That My Partner Is Happy with Her Lover” by Aaron Ben-Zeév (June 2). It's an excerpt from his book The Arc of Love: How Our Romantic Lives Change over Time  (2019).

Compersion is a complex emotion that appears in complex circumstances. ...

[Having] multiple parallel romantic relations enhances [the likelihood of fearful comparisons].... The comparative concern in polyamory is more vivid because you are surrounded by people who are tied up with your self-esteem: the lover of your spouse, the spouse of your lover, and others in this romantic network. Nevertheless... the fact that polyamorous ideology favors such parallel relations reduces the weight of such comparison. The weight of comparison is also reduced when there are significant differences between the primary and secondary partners, for example, in age, appearance, character or occupation. This is because making comparisons between similar people is easier than making them between those who are significantly different. ...

●  My pick as the British tabloids' happy-poly story of the week: Polyamorous couple who bring other women into their relationship, and even take them on exotic vacations, insist that having a third partner keeps their romance 'fresh' (May 26). Yes, another MF couple finds another F.  But the reason these get so much tabloid attention is that they're probably the commonest polyfamily form and therefore the easiest for the tabloid content agencies to find. 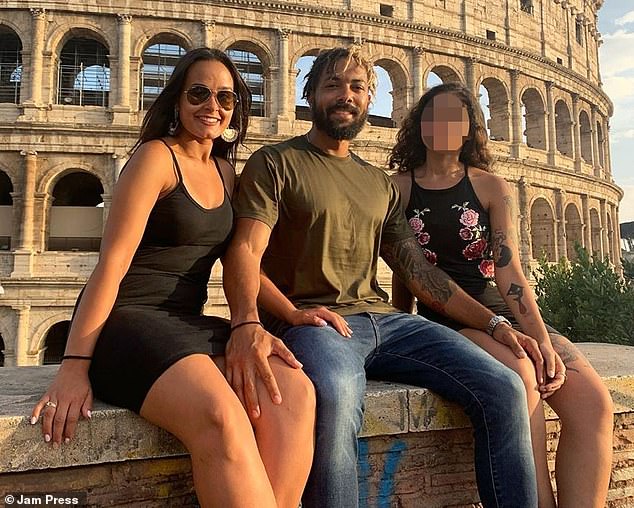 For Priscilla Soares, 25, and Steven Bolden, 26, from Connecticut, the idea of having another woman join their relationship initially started off as a joke but it soon became a reality for the couple - who now regularly document their experiences on YouTube and Instagram.

Speaking to Jam Press Media, the couple, who have amassed a steady fan base on social media, explained they initially started sharing the details of their unusual romantic arrangement due to a surge in interest from their followers.

Priscilla and Steven are incredibly open about their polyamorous romances on social media, however they keep the identities of their dates hidden.

'We started answering a lot of questions and so began making content based around that but our intention was, and still is, to inspire people to live their best lives while becoming their best selves, to see the world and have as many peak life experiences as possible and also to educate and provide resources to help people structure their lives in a way that they can live freely,' Priscilla explained

...Priscilla notes that a love interest will not move into the couple's home immediately but that the three of them will spend a lot of time together. "...'Moving in together is a big step. That should only happen when everyone feels it's time.' 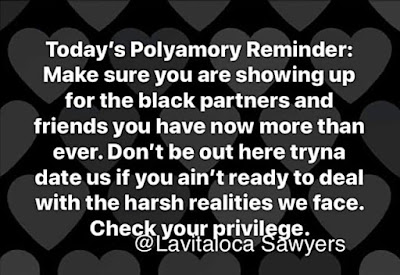 Image link.
On a related note, Moose and I are off to our third day at the daily BLM demo in our white-bread suburb. It's being run mostly by high-school kids. The car-honking in support is like nothing I've seen before at vigils in my 30 years here. The honking is sometimes almost continuous despite the thinner commuting traffic. Something really is happening.
See you next Friday, unless news presses sooner.
-------------------------------------
1.  CNM, consensual non-monogamy, has quickly become an umbrella term among psychologists and sociologists (it covers not just polyamory but also open relationships, swinging, etc.), because it is defined exactly, by behavior. Just like MSM, "men who have sex with men," which is used in medicine because it includes self-closeted men who don't consider themselves gay or bi. (Think former U.S. Senator Larry "Wide Stance" Craig, R-Idaho, a homophobe with favorite airport mens' rooms.)
[Permalink]