Ashli Babbitt, dead Capitol rioter, in the news as part of a living-together throuple

Not the kind of polyamory in the news we wanted or expected, but here it is.
On 1/6, hundreds of insurrectionists broke into the US Capitol building, some chanting "Hang Mike Pence," some shouting to find and kill members of Congress, and some carrying weapons and zip-tie handcuffs. One swarm smashed through the glass of a locked and barricaded door to the House Speaker's Gallery, which opens onto the House Chamber, while Congress members and staff in the chamber cowered behind shelter. A Capitol policemen just inside the door trained his pistol on the breach. Ashli Babbitt, wearing a Trump cape, tried to clamber through with the shouting mob pressing behind. The policeman shot her. She later died. No more tried to come through the broken door.
Babbitt was an Air Force veteran from San Diego and a passionate QAnon cultist. She was married to Aaron Babbitt, a former Marine.
And it's now in the news that they lived in a polyamorous triad with their younger mutual partner, Kayla Joyce.
In the UK's Daily Mail: EXCLUSIVE: Dead MAGA rioter Ashli Babbitt and her Marine husband were in a THROUPLE with live-in 29-year-old bartender who is sticking by the widower's side as he mourns his wife's Capitol shooting death (Jan. 14).

DailyMail.com can reveal that Ashli and her ex-Marine husband Aaron were in a three-way relationship with a 29-year-old bartender.
Ashli's brother confirmed that their girlfriend Kayla Joyce lived with the married couple in San Diego. Kayla is sticking by Aaron's side and consoling him as he mourns his wife's death.
...Kayla Joyce lived with the married couple in San Diego, and is sticking by her widower boyfriend, Ashli's brother told DailyMail.com in an exclusive interview. ...
The 35-year-old former military officer and her husband met Kayla about a year ago, and decided to welcome her into their open marriage – which was itself only a few months old. ...
Ashli and Aaron, who served as a Marine from 2000 to 2005, married in 2019 and met their girlfriend less than a year into their marriage ... while she worked at one of their local drinking haunts, Ocean Beach Brewery. ...

The three lived together and took selfies together. Story in the New York Post, which often picks up Daily Mail stories (Jan. 14). Also in the Toronto Sun and elsewhere.
This part of the Ashli Babbitt story was actually broken by New York magazine on January 11, as a minor mention in its profile of Babbitt: Who Dies for Donald Trump? It quotes their triad partner Kayla Joyce, who does not sound like she sympathized:

“I blame Trump. How could you not? I mean he is their figure, their president,” Joyce said. “Why else would they do that unless their leader tells them to do that? ... If I could get into her head and pick her brain, I would.” 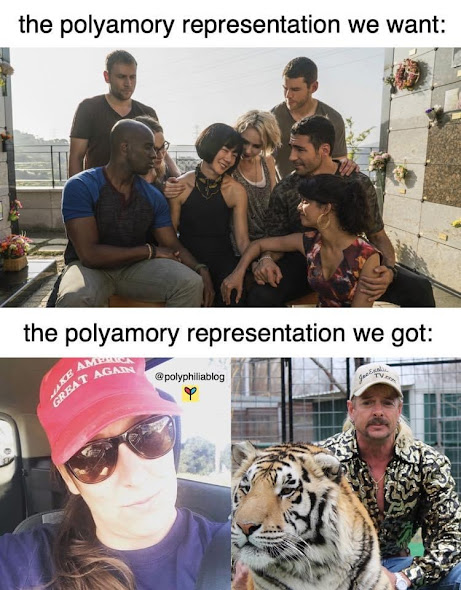