Solopoly stories in the media this week, how to tell your own story and get paid, and more.


Fifteen years ago I was saying that this consensual multi-relationship thing really turns heads, and that media were beginning to wake up to the fact. Well yup. Here it is 2022 and they can't get enough.

●  A Gen-Z targeted site called Screenshot ("New conversations for and from the new generation. ... learn what we can do for your brand") spotlights a rising music/TV personality and influencer: How Willow Smith’s solo polyamory may have paved gen Z’s way into ‘relationship anarchy’ (Jan. 11)

By Svetlana Onye
Through solo polyamory—that is, having multiple intimate relationships while maintaining an independent single freedom—women are experiencing a self-love like no other. ...
Willow Smith, pop punk singer and black alt-girl icon, has openly talked about belonging to the polyamorous community while routinely sharing Instagram posts on what polyamory is all about. More and more women seem to be defying the status-quo of what a relationship should look like, and as ‘relationship anarchy’—don’t worry, I’ll explain soon enough—becomes a more common reality for the younger generation, it seems that it’s time to seek relationships that work for you.
...The singer appears to have never shied away from the topic and shares daily posts about solo polyamory in particular and what loving multiple partners entails. With a follower count of 9.7 million fans, it’s clear that the youngest Smith wants to educate people on a mode of loving that is often stigmatised.... One of those followers who Smith successfully educated was myself.
...It is unsurprising why this particular style of polyamory has become increasingly popular among women, specifically women of colour (WOC). Self-titled ‘Sex Positive Asian Auntie’ Jayda Shuavarnnasri, a sexuality and relationship educator, shared similar sentiments on her own platform, telling her followers that being solo poly meant that she is “experiencing myself, centring myself and choosing myself every day.” ...
...What we are seeing with the younger generation today are rapidly evolving ideas of relationships. From platonic partnering to solo polyamory, relationship anarchy is truly in action as many continue to redefine the boundaries of friendships or the openness of love.

●  Have you, a non-famous non-influencer, thought of telling the world your poly story and maybe getting paid a bit? Lots of outlets are probably interested. Online magazines in particular are always hungry for content. Find a few that look promising, write and ask.
For instance, Jessica Renaglia just got her first-person story published in Australia's MamaMia ("a women’s media company to make the world a better place for women and girls"):  'I have a loving male partner and a girlfriend. This is how we make it work.'  (Jan. 11). Frankly, it reads to me like she just narrated it into her phone and did some cleanup. But it definitely got her story across to readers.
MamaMia pays for original short pieces like this, as told at the bottom of their submissions page. According to the crowdsourced WhoPaysWriters.com, MamaMia was paying $0.07 per word as of 2019. Not much, but not bad for something you can write off the top of your head.
Update: And, one thing can lead to another. That little piece got her profiled on the site of Australia's 7News, the country's most-watched TV news service: Inside a polyamorous relationship, by Australian woman who dates boyfriend and girlfriend at same time (Jan. 18). If she wasn't an influencer before, she is now.
●  Or you can interview other people about their stories. Zachary Zane, a successful freelance writer on queer and poly relationship topics, just placed this piece in the mass-circulation Men's Health (or at least its website): Here's How Solo Poly Compares to Other Kinds of Polyamory (Jan. 12). WhoPaysWriters.com indicates that as of a few years ago, Men's Health was paying 25 to 50 cents a word.

...“Solo poly is a relationship type where a person chooses not to have any primary partners—more specifically, partners that we get on the relationship escalator with,” explains Zhana Vrangalova, PhD.... Solo poly people have no desire to “live together with a partner, get married, have kids, join finances....”
...It's also different from "dating around" the way a non-poly person might. When someone is simply "dating around," they typically have a string of connections until they find the "one" and proceed to settle down with them. A solo poly person has no desire to settle down with one (or multiple people) anytime soon.
...We spoke to four people who proudly identify as a solo polyamorist: Jack, 34; Collin, 39; Phoenix, 33; Carlos, 26. Here’s what they had to say. ...

And on it goes for another 1,000 words, question by question, with good, articulate interviewees providing most of the content.
●  Similarly, in the Philadelphia Weekly Dr. Timaree Schmidt just interviewed several local CNM-ers. One of them describes a spectrum of metamour-relations terms that's gaining traction, in addition to the well-known "kitchen table" and "parallel." The two new ones seem to have originated with the Multiamory podcasters.
The article: Multiple Ways To Have Multiple Partners (Jan. 13). She's interviewing Shay Au Lait, "a Philly burlesque producer and theatre artist" who provides these descriptors, with links:

But I prefer "Snuggle Pile Poly" to "Lapsitting." I find sitting in laps uncomfortable and awkward for both parties, but I was meant like a puppydog for friends-and-lovers snuggles.
●  It's hard to get a random sample of the multi-relationship experiences that people in the broader world have had, outside the streetlight glow of the self-identified poly movement with its collective culture (however diffuse) of shared experience and wisdom, values, advice and best practices.
Buzzfeed just posted a sample of the wider picture: People Who Have Been In A Throuple Are Revealing Their Wild Secrets, Stories, and Tips, and You Just Gotta Read It For Yourself. (Jan. 14)

We asked the members of the BuzzFeed Community to share their stories and advice about their experience being in a three-person relationship (aka a throuple). Here are some of their most engaging and insightful replies. ...

The 15 experiences are rather more bad than good; a number of the people blundered into avoidable known messes. There's a need for wisdom-sharing before people do this! Those of you who can educate, please keep it up.
Note: Buzzfeed asks for more group-relationship stories at the end of the link above.
●  Meanwhile, jumping way up the media scale, the New York Times "Social Q's" columnist, Philip Galanes, gives well-meaning advice to the upset mom of a poly daughter: My Daughter’s Married Boyfriend Shouldn’t Join Us on Vacation, Right? (Jan. 13). Galanes sounds all poly-positive and everything, but I see an elephant in the room trumpeting for attention.

My 30-year-old daughter is in a polyamorous relationship with a married man. She brought him home for the holidays, and while he was charming, I felt uncomfortable. (This may have been triggered by my husband’s infidelity that led to our divorce.) Now, my daughter tells me she would like to bring this man on our family trip to Greece this year. It may be petty, but I don’t want to foot the bill for another woman’s husband. And I don’t see any way this relationship can lead to my daughter’s happiness. ...
MOM
...Let’s put aside the trip to Greece and the specter of your cheating ex. Unlike him, people in polyamorous arrangements usually set ground rules with their partners for opening their relationship to others. (No one is cheating!) Try to understand, as best you can, what your daughter likes about this arrangement and how it satisfies her.
As a show of respect, read up on polyamory before you broach the subject with her. Then ask questions. I am not suggesting that you set aside all of your concerns — only that you try to respect your adult daughter’s decisions. ...

All well and good, but the gaping black hole in this picture to me is the boyfriend's invisible wife. "No one is cheating!" writes Galanes. Well then, the daughter could just call the wife and ask "Here, I'll hand the phone to my mom and you can clear it up for her." But if daughter asks the guy "Let's call [wife] so she can explain to Mom" and he stalls and fidgets and sweats, well...
Science says there are 43.7 gazillion guys these days whose idea of "poly" is "My wife and I are in a poly relationship but she mustn't find out."
Trust but verify. Does the daughter even know?
●  On a happier note regarding poly inter-relations, Metamour Day is coming up!  Metamour Day ("celebrating polyamory's most distinctive relationship") is February 28th, Valentine's Day times two. This year the National Coalition for Sexual Freedom (NCSF) is taking the lead to make it a Thing across social media on the big day. And, artists and graphic designers, they are calling you: 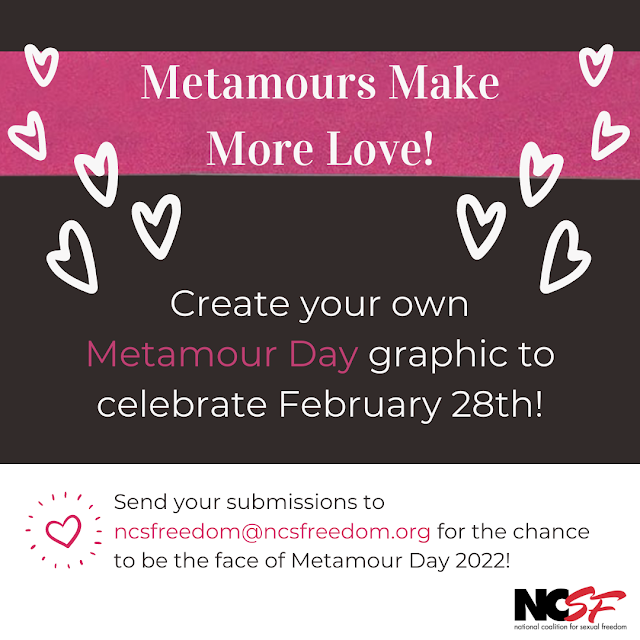 I read the NYT's letter and response. I'm curious as to why you think that this is a secret relationship. There's nothing to indicate that the relationship is a new one. From what is written, it could have been going on for a while (especially if enough time has past for the mother to transfer the reason for the breakup of her own marriage to her thoughts on the poly dynamic her daughter is in). If the boyfriend comes over for the holidays and is willing to go on a long-distance trip with the family, it seems more likely that it's a normal healthy polyamorous dynamic and not someone cheating on their spouse.