Nico Tortorella and Bethany Meyers, poly TV-star couple, back in the news as they marry


When a celebrity makes news as "polyamorous," you never know what you're gonna get — often a cringe-y misuse of the word. But two who use it accurately are TV star Nico Tortorella (of the Younger series) and life partner Bethany Meyers. They're excellent public representatives of the primary-secondary version of poly — or if you don't like hierarchical language, "anchor and satellites."

Here's more since my post about the two last summer, when they made the cover of The Advocate.

● They're in the news right now for announcing that after 12 years, they just got married. They've published the story of the wedding and their lives leading up to it in the online queer magazine them: Inside Nico Tortorella and Bethany Meyers' Private, Epic Wedding (March 17, 2018).


They alternate narrating. Here's from Bethany early in the piece:


If you had to label it, Nico and I are in a queer polyamorous relationship. Labels that help people understand, but not labels that define us. Most think we planned this and one day decided we would be multiple-love kind of people. We didn’t. It’s just the way our relationship developed over 12 years. We became polyamorous without ever really trying, and we let each other go so often; I guess we finally realized it’s the reason we are impenetrable. It’s hard to break something that bends.

As written up in People: Younger’s Nico Tortorella Got Married 'for Real' to Partner in Matching 'Genderblending Ensembles' (March 17)


...While Tortorella and Meyers don’t seek to put labels on themselves or each other, they added that they understand the world’s need for [labels].


● In Women's Health, Bethany goes into greater depth: ‘I’m In A Polyamorous Relationship — Here’s How It Works’ (online March 12): 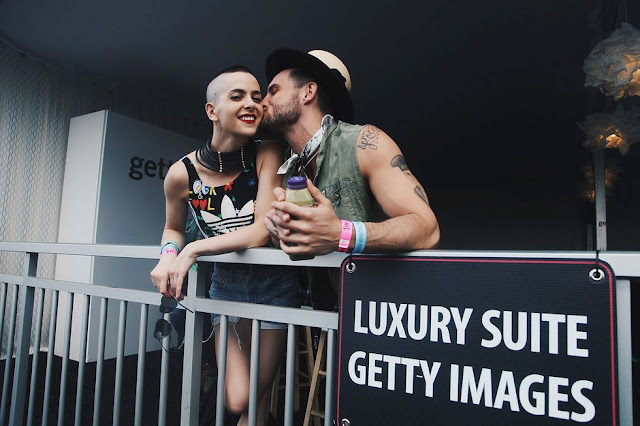 I’ve been in a polyamorous relationship for almost 12 years, but my partner, Nico, and I didn’t always call it that. In fact, we adopted the "poly" label more as a way to help others understand our relationship, but we just view each other as partners.

We met in college. I was drawn to him because he was one of the first people who challenged the ultra-conservative beliefs I had grown up with, in a noninvasive way. He introduced me to things I now love, like yoga, and there was an instant connection. But our relationship has always been really unique.

...We love each other and are family, but we both believe in letting the other live the life that makes them happy. We realized pretty early that we can’t satisfy each other’s every need, especially when we were living so far away from each other. So we got really honest about dating other people and letting those people into each other’s lives.

That’s just progressed over the last 12 years, so it’s funny to now be putting a polyamorous label on it, when we didn’t have a big conversation about entering into a poly relationship. It’s just what worked for us and it’s where we’ve landed.

But that’s not to say it’s been easy. Nico and I have to operate with full transparency. No Saran Wrap, nothing. I’ve learned that when people find out about things after the fact, it’s incredibly hurtful. But if you’re up front about new partners, you can work through those emotions.

So when I’m going to a party to meet people, Nico knows about that. It’s not a secret. And it’s not a secret to anyone I meet there that I’m with Nico. I would never take someone home unless Nico and I had talked about it first.

Yes, jealousy happens — it’s a human emotion, and we all have that desire to be number one. I’ve found that being really honest about what’s going on in our lives helps combat that.

It’s also important to understand each other’s boundaries. Nico and I have been together for so long that we just get it, and we don’t have to check in with each other about those things a lot. But I dated another woman who was super monogamy-oriented, and I’m not, and we had to set up boundaries that worked for us. We had a zip code rule — we couldn’t date anyone else in the New York area, and that was hard for me. We were never able to find a sweet spot with the boundaries that worked for both of us, and that’s why it didn't last.

[The Most Common Misconceptions About Polyamory]

That’s one of the hardest parts of being polyamorous — finding the right people. There are a lot of people who think they can do this, and then emotions get involved and they can’t. You have to find people who are really in touch with themselves and how they feel.

When I meet someone I’m into, I try to be really upfront but casual at the same time. I’m not exactly yelling, “I’m poly! Wanna be my second girlfriend? It’ll be great!” That’s a lot. But I try to talk about my relationship as realistically as possible. I talk about Nico the way he is. He’s a great person; Nico is an addition to the team, not a subtraction from the team. He’s a support person for me, so it actually is a very positive place to be in.

The label is the scariest thing. People hear “polyamorous” and they think it’s people having sex like crazy and that’s just not how it is.

For Nico and I, the benefits far outweigh the challenges. I feel safe in our relationship. In monogamy, there’s often this fear of “But what if they leave me?” With polyamory, that fear is gone because no one needs to cheat or lie, and we’ve built this place of trust where we can really talk about what’s working and what’s not working. And that feels like a better place for me. Being poly allows us to be authentic and explore what makes us happy in our lives in a way I didn’t feel like I could in monogamous relationships.

Being open about our relationship has been hard on some people in our lives (my family didn't welcome us at our holiday celebrations this year), but mostly, the feedback we’ve gotten has been amazing. ...

We feel like it’s important to talk about it and normalize it, especially because we look like a straight couple in a photo, and we don’t identify with that at all. Being able to sort of get away with that when we’re walking down the street or traveling gives us privileges that most queer people don’t have, but it’s also important to show that being poly and queer can look a lot of different ways.


● Also in Women's Health: This Polyamorous Actor Just Gave A Glimpse Into What Life With Multiple Partners Is Like (Nov. 14, 2017).


Family dynamics are tough and it’s pretty much a given that your family is never going to get you 100 percent. That said, you'd hope that they’d support you most of the time...especially around the holidays.

Unfortunately, Younger actor Nico Tortorella and his partner of 11 years, fitness and wellness entrepreneur Bethany Meyers, say their decision to be open about being polyamorous makes them unwelcome with her family this holiday season.

“Honestly, it’s kind of a sensitive topic right this second,” Nico told People at an event on Monday. “Because of all the attention that the relationship has gotten recently, we are coming up to the holiday season and because of certain things that were said, Bethany and I are not necessarily, completely welcome in her family celebrations this year.”

In July, Nico and Bethany opened up about their sexuality to The Advocate. Nico said at the time that he identifies as pansexual (meaning he’s attracted to everyone regardless of their gender identity or sex) while Bethany identifies as gay.

The couple also opened up about dating other people — Bethany said she’s happy to have casual sex, while Nico prefers to be in love first. “For me, sex is such an explosive exchange of energy between two people that if you’re not connected, energetically, before you have sex, it can be damaging,” he said. (He also added that he has no issues with casual sex — it's just not for him.)

And criticism from family aside, navigating how to best navigate their 11-year relationship hasn't been simple: “I think we’re raised with this idea that you’re supposed to go and find ‘the one,’ especially women,” Bethany said during Nico's podcast, The Love Bomb. “You’re looking for your Prince Charming. You need to be proposed to. There’s this one person you’re searching to find, so the idea of finding a stability partner, and having other things on top of that, feels too messy.”

Still, neither Bethany nor Nico regrets being open about their polyamorous relationship. “It just means we have to talk about it more. There are millions of people in non-traditional relationships that get cut off from their families every single day and it’s not okay,” Nico told People. ...


“I’m not in an open relationship so I can go out and just f— whoever I want,” Tortotella explains in the Bravo clip. “For me, it’s more about the ability to emotionally connect with people outside of my primary partner.”


● The Bravo clip, ending with a snappy comeback:

FYI, the source code of the undated Women's Health article indicates a publish date of 2018-03-12.

Thanks! I've updated the text.