The segment draws on The Atlantic's article last month The Rise of the 3-Parent Family and features the same set of three parents. It also gives a few seconds of air time to lawyer Diana Adams, who specializes in legal arrangements for poly and other non-traditional families and runs the Chosen Family Law Center. That was too brief for her to deliver the kind of pithy quotes you may remember from the Atlantic story.
Watch here (aired Oct 9):

●  Poly in the time of Covid stories continue to appear in the media, though less often now than last spring. Today, for instance, What it's like to be polyamorous and non-monogamous during a pandemic is in the "Executive Life" section of Business Insider Australia (Oct. 9) and other international editions of Insider. It's by Canela López, making this at least her fifth polyam story for Insider in the last year.

...Poly and non-monogamous people are having to find alternative ways to keep themselves safe.

By Canela López
...“This is really not a time to have multiple partners, especially if you’re going to be doing anything that involves taking off the mask,” Dr. Sandra Kesh, an infectious disease specialist... told Insider.
...“I think it’s about harm reduction in the terms of it being sustainable to social distance,” Ken, a polyamorous person in Spokane, Washington told Insider. “It’s a lot to ask non-monogamous people to not be with all of their partners, and for mental health, it just is not sustainable.”
Insider spoke to several polyamorous and non-monogamous people about how they are keeping themselves safe during the pandemic.
Frequent testing is key
A Tulane University senior [said] when the pandemic was declared in mid-March they stopped seeing people, relocated to California for the summer, and did coronavirus research for a highly ranked university. But when they returned to New Orleans in August, they gave it two weeks and decided to contact their old Tinder hookups and friends with benefits.
This is in large part because Tulane requires its students to get tested for COVID-19 twice a week. ...
...Ken started seeing his partner Angie in early August when restrictions on social distancing began to loosen up. Because Angie has four partners and Angie’s spouse additionally has multiple partners, everyone in the polycule — “people involved in the polyamorous dynamic” — has to get tested for COVID-19 once a week.
Limiting high-risk activities like kissing has made some people feel safer
New York City put out guidelines in June on how people could reduce their risk of infection during sex, like wearing masks, doing positions like doggie style or rider positions, and avoiding swapping [the virus] by performing anilingus or kissing.
While they don’t wear a mask during sex, the Tulane student said they try to follow the advisory to limit the exchange of fluids with their partners to reduce their risk.
...Because they live on-campus and aren’t allowed to have guests in their rooms, they meet elsewhere.... They once even got caught having sex in Audubon Park, a public park located across the street from Tulane.
Open and honest communication about social distancing and boundaries
Like discussions within polyamorous and non-monogamous dynamics prior to the pandemic, boundaries and expectations are incredibly important to set before adding a partner to a polycule or rotation of people.

“Ken was definitely very intentional and being like, making sure I knew that they would wear masks during dates, they would be socially distanced, telling me whenever they planned on actually going over to Angie’s house,” Ri said. “We’re super talkative with each other about those things.”

The 21-year-old Tulane senior told Insider they are fully transparent with each of their sexual partners about the number of people they’re having sex with and how many people they generally interact with. “I let them know that they’re not going to be like the only person in my life that I’m involved with sexually because I feel gross if I keep people in the dark,” they said. As of early August, no one in their rotation has tested positive for COVID-19. ...

●  Actor and bi-poly relationship educator Nico Tortorella is on the the cover of Attitude, the UK's "best-selling gay magazine": Nico Tortorella lifts the lid on their queer polyamorous relationship (short version online Oct. 7, also in Out, PinkNews, and elsewhere; full interview paywalled in the November Attitude print issue).

...The star of The Walking Dead: World Beyond is more than happy to help educate family, friends and fans about the vast spectrum of sexual identity if it opens hearts and minds. 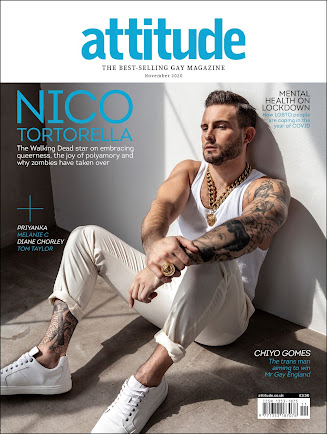 ...Nico met his now-wife Bethany C. Meyers during college, and the pair have maintained a relationship for almost 15 years while often exploring their sexualities independently of one another.
...While society's understanding and acceptance of LGBTQ people has moved on leaps and bounds over the last two decades, the concept of polyamorous relationships remains taboo to many people, straight and queer alike.
..."I think both of those words, queer and polyamorous, are heavily weighted, and they mean different things to different people. And what they mean to us works for us. And sometimes it doesn’t. We still struggle. We’re not experts in any of these fields. But what’s different about it is we’re having these conversations publicly. Every single day is a learning process for us. The next step is us bringing children into the conversation and into the mix."

●  Polyfamily researcher Eli Sheff, author of The Polyamorists Next Door and a long-running Psychology Today blog of the same name, is out with a pair of advisory pieces on the most common things that newly opening couples seem to want. Unicorn Hunting for Heteroflexible Threesomes ("Why it is so difficult for heteroflexible couples to find women to date?", Sept. 21),  and How Can Nonmonogamous Couples Improve Their Dating Lives?  ("Tips on expanding your dating pool and treating partners right," Oct  9.)
●  And this week's happy polyfamily in the tabloids: Pregnant girlfriend who admits she struggled when her boyfriend's ex joined their relationship now wants him to have a baby with her too so that their children will grow up close (Daily Mail, Oct. 8) 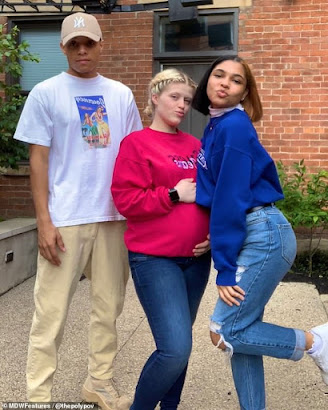 A woman in a polyamorous relationship who accidentally got pregnant has revealed she now wants her boyfriend to have a baby with his other girlfriend, too.
Trainee public accountant Hayley Hale, 22, from Cincinnati, Ohio, and psychology student Ciara DeJesus, 20, both spent their high school years casually dating receptionist Devin Hale, 24.
Hayley and Devin decided to make their relationship more serious in 2015 and have been together ever since, but in 2018, Ciara got in touch and asked if they wanted to form a three-way relationship.
Although Hayley had reservations about the idea, Devin was excited and she decided to give it a go.
The initial 12 months were difficult, with both girls' previous relationships with Devin making it hard for them to connect on the same level.
Hayley says that jealousy in a polyamorous relationship can turn small disagreements into massive flare ups, but by working on their individual relationships, the trio now get on well.
After Hayley and Ciara focused on developing their own relationship, the romance between the throuple also blossomed.
Hayley said: 'Polyamory to us is just like a regular relationship but more complex because it involves three people.
'It's more like having four relationships - we all have individual relationships with each other and then one as a whole.'
The trio already live together and share a bed and all of their finances, and they hope that with three incomes supporting their household, they will be able to have greater financial freedom
The trio plan to have a wedding ceremony, which will not be legally binding, to show to their families how committed they are to their polyamorous relationship.
'Being a triad means we get more out of life because we will be able to have an even bigger family with more love, support and financial freedom.'
...'Everyone is so different and so is everyone's version of love.
'Live the life you want, be happy, love is love'.

Till next time! Take care, and check your voter registration status in any of the 50 states. So that if you've been purged from your local voter list without your knowledge, as happens, you can demand it be fixed.