Folks get serious about a new and better polyamory flag

A year ago I published a screed titled The Polyamory Flag is a Grim, Confusing Failure. Let's Do Better. Repeating many other people, I said its colors are harsh and foreboding and its central letter pi only prompts a huh? (Some math or engineering society?) The flag "fails to declare for us, fails to inspire, fails to do a flag's job."  I posted some of the alternative flags that people have created, and gave some history of the early poly movement and its symbology.
That article struck a chord. It became my most-read post of the last 12 months, and its hit rate has been increasing. It's now averaging 500 new reads a week, mostly through Google searches for "polyamorous flag", "poly flag" and so on.
Dozens of people's new polyamory flags are floating around. A few have gained some traction. But no consensus has formed up around any design — one that will display poly presence, pride, and attitude with clarity and verve, in a way that both we and the world will instantly recognize.
Why do we need that? Look at the social power of the rainbow Pride Flag, which the LGBT world grabbed up almost from the moment Gilbert Baker created it in 1978. It did a great deal for the visibility and normalizing of LGBT, and it still does.

And, look at the recent explosion of other new identity-pride flags: trans, ace, pan, genderfluid, bi, and more. These have won hearts in their communities and a lot of favorable mainstream-media notice for those identities (even for instance in the white-picket-fence Reader's Digest).

--------------------------
Now folks are launching an initiative to see if the polyamory community is ready to coalesce around some new design that will stir us to make it our proud standard.
Sarah "Mack" Flury and Kristian Einstman, based in Chicago, are going about this project from the ground up, showing smarts about how such an effort might actually work in this disparate, independent-minded herd of cats we call the poly movement.
Their first goal, they say, is "to create a committee of some of the most influential voices in the community, networking worldwide." They explicitly want to keep this from becoming an American-centered project. "Our goal," says Einstman, "is to create a flag that is recognizable and representative worldwide.
"We have collectively formed @PolyamProud, a volunteer coalition dedicated to establishing a definitive and representative visual identity for the polyamorous community."

They hope to launch a worldwide discussion among all who want us to have "a definitive and representative visual identity," as Einstman tells us. The eventual committee may create and offer designs of its own guided by known principles of vexillology (flag study), and it may consider design entries by additional people. He continues,

We have no intention of trashing the old flag and its history and its role in getting us as far as we've gotten. But there is a real, pressing need in the community to have a single flag that serves us all well.
A flag is a way of proclaiming visibility, so that people who are not yet out can see where there is a place they can go, can see that there are other people like them.

"We want to make it clear that we are not the committee and none of our team will be on it," says Einstman;

We’ll be releasing information about committee member qualifications on our site within the next month or so, but our main goals are to have the committee members represent a wide range of socioeconomic, racial, cultural, and non-monogamous backgrounds, as well as varied levels of education and areas of expertise.
Our plan is to present designs to a small committee of (no more than 12) representatives from polyamorous communities worldwide. The committee will review options and select two to four designs to be presented to the public for the final vote.

Flury and Einstman say they want to announce the winner of the public vote with full social-media fanfare on November 23rd, Polyamory Day. "We also want to get it into the hands of merchants" who manufacture flags, shirts, stickers, coffee mugs, all the usual stuff. They hope to recruit publicists who will build media interest as the day nears.
--------------------------
Want to help make this happen? Do you have skills, expertise, or time & energy to contribute? Once again: @PolyamProud on Instagram. They're also on Twitter. Their GoFundMe.
Here are slides from an early presentation they've worked up. 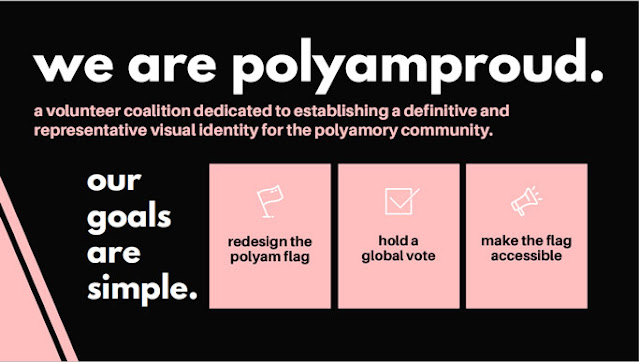 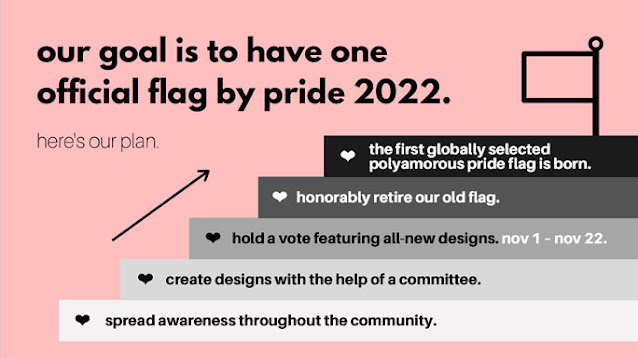 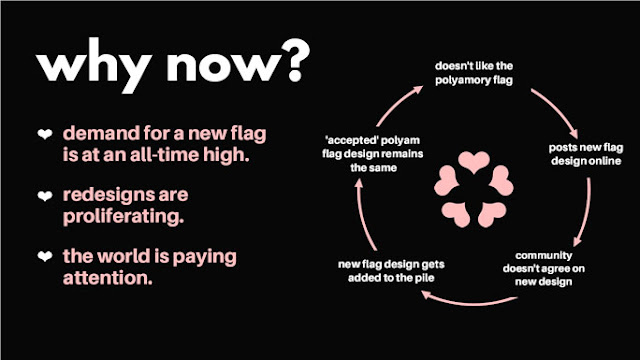 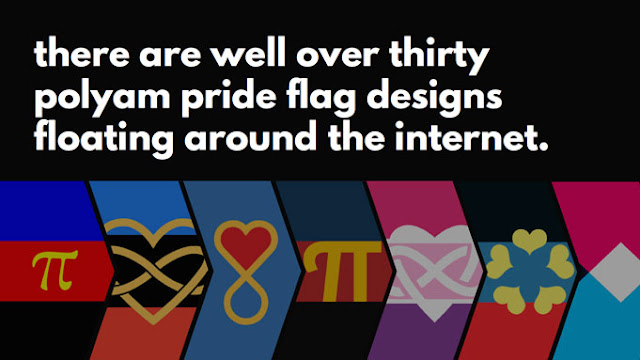 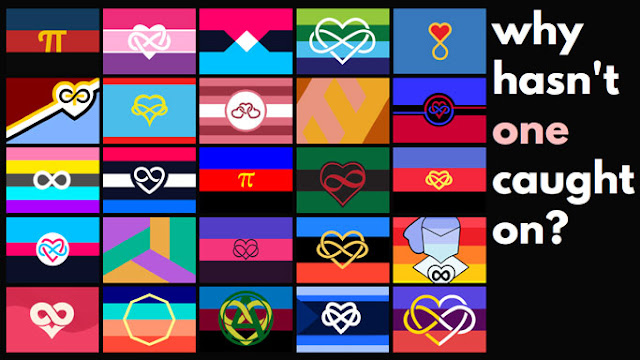 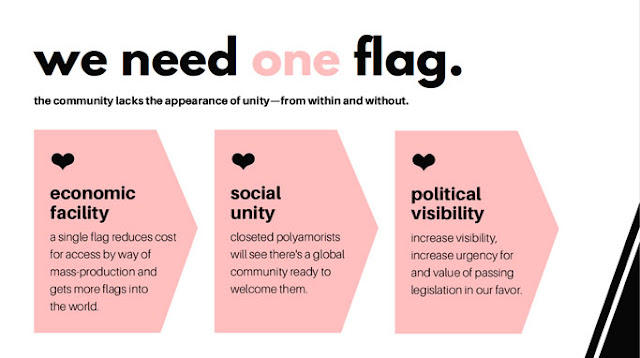 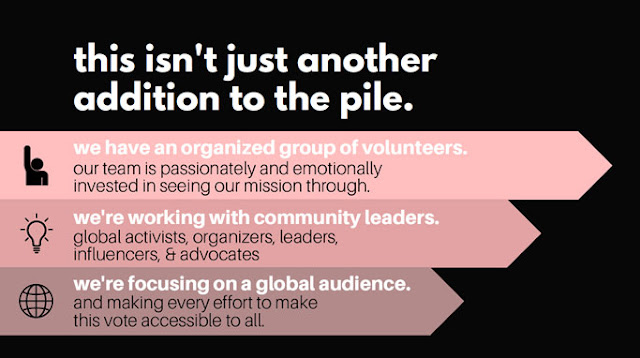 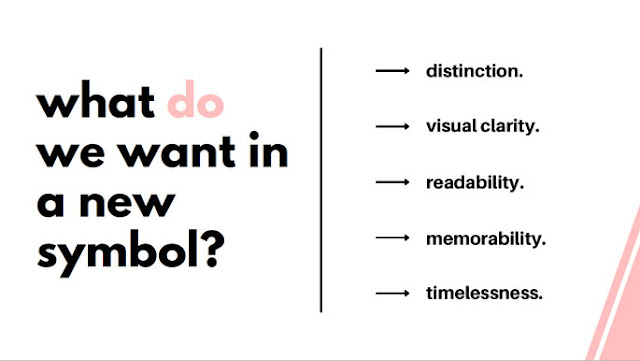 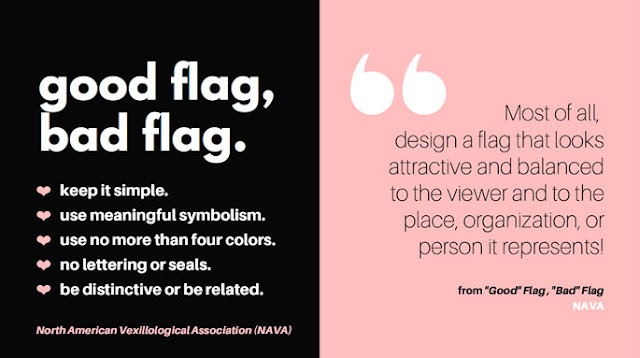 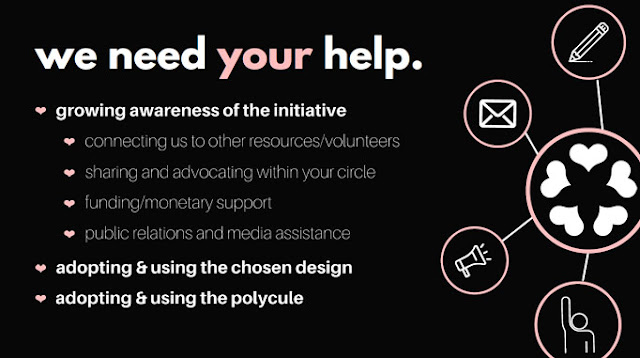 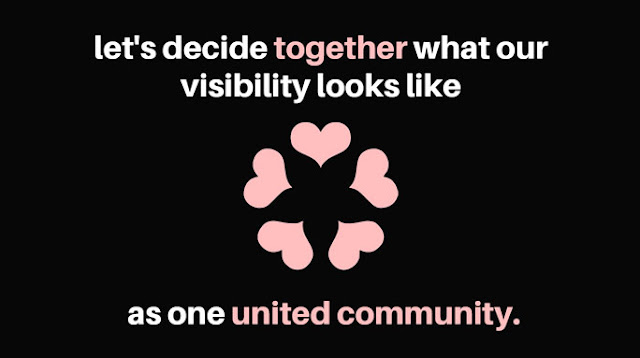 So far the prevailing sentiment has been that we don't want or need a flag. It's also really important that we not presume ourselves onto a day that is meant for the LGBTQ+ community.

The infinity heart seems to be used in more versions than others. I like it because one can choose a gay poly flag or trans poly, etc., by choosing colors. Which one will include the variety of kinds of polyamory?

The infinity symbol is already used for Autistic Pride.

an infinity heart isn't used anywhere iirc, and it seems distinct from the autistic pride flag