NBC: "Gaby Dunn on embracing her polyamorous bisexuality and why she loves 'The Bachelor' "


Remember No Fun Gaby Dunn, one of the young queer poly comediennes out there? In 2014 she jumped to fame in the poly world as the face of this viral 3-minute Buzzfeed video, "Ask a Polyamorous Person":

Her career has continued to develop, with an abundant video presence, two novels and a third on the way. She just got a 20-minute interview on the NBC News divisions NBC Out and NBC Think. Some if it is slow by Gaby Dunn standards, so I'll jump you straight to the poly part:

Here's from the accompanying text:

By Christine Nguyen and Brian Latimer

With a popular YouTube channel, two podcasts, a New York Times bestseller and a handful of TV pilots, it can be hard to summarize exactly what Gaby Dunn does in one word.

“A lot of times I just say ‘writer,’ because that's what I wanted to be when I was a kid,” Dunn told NBC News. “If I'm on like a date, I try to not say what I do for as long as possible. So I'm sure I sound like I'm in witness protection because it's so hard to explain. Like there's too many.”

It’s a skill she put to use on her latest project, “Please Send Help,” a sequel to the New York Times bestseller “I Hate Everyone But You” that Dunn penned with her comedy partner, Allison Raskin. ...

...And she’s vocal about her bisexuality and nonmonogamy, two identities she said took her a long time to come to terms with.

...Dunn recently joined NBC News THINK and NBC Out to discuss coming to terms with herself, monetizing her identity and why “The Bachelor” is the greatest franchise about polyamory ever made. ... 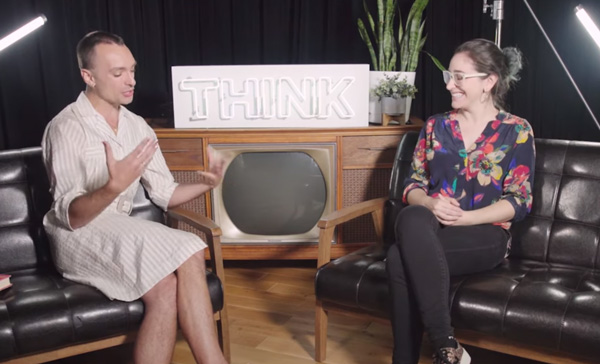 The Dayton shooter's girlfriend is in the news as polyamorous


Adelia Johnson, the ex-girlfriend of the Dayton shooter who killed 10 people on August 4th, has posted her story of her relationship with him on Medium. In it, she explains that the reason she was able to date him while engaged to her fiance is because she is polyamorous. Her two mentions:

...By the end of the night, I was trashed from accidentally drinking too much from anxiety. [The future shooter] seemed way soberer than I was. So, we left my truck at the parking garage and he drove me home. On the way, I asked if it was a date. He asked what I wanted it to be. I told him that I asked him first. There was a pause. I told him I wanted it to be a date and explained that I’m polyamorous. He smiled and said that it was a date, then. We got to my apartment, and he walked me up. We lingered outside my door. I told him that I wanted to kiss him, but I wanted to kiss him sober. He chuckled and said that that was sweet. And we left it at that.

...Polyamory is confusing for everyone involved, but luckily he and my fiance at the time were both understanding and consenting.

...Our relationship mostly consisted of us going out drinking and talking about our mental illnesses and him telling me about world tragedies and me talking about TV shows.

Some of the right-wing internet is trying to exploit the polyamory bit politically, so here's her story so you know the reality: My Ex-Boyfriend was the Dayton Shooter (August 6, 2019).


It's only been online for a few hours, but today's 2,300-word feature article in the New York Times Style section, "Polyamory Works for Them," is getting a lot of attention judging from the Google alerts coming in.

It presents a stunning view of polyamory, enhanced by Yael Malka's gorgeous photography, that is not the one I'm familiar with in my part of the poly world. The people come across as the social and sexual upper crust of New York City's young style-and-culture influencers.

And BTW, I counted: This time the photography presents 15 black faces, 9 white ones, and 2 that I don't classify. I wonder if someone at the Times Style section took on board the criticisms of whitewashing and tokenism that followed the Times's last massive, photo-heavy CNM feature, Is an Open Marriage a Happier Marriage? (May 11, 2017). Tip 'o the hat to Kevin, Antoinette, and Ruby for kicking up that storm.

Polyamory Works for Them

Having multiple partners can mean more pleasure, but it’s not always easy.

Through a half-century of sexual upheaval, monogamy has been a curious stalwart.

...Yet in certain concrete burrows, monogamy’s inverse is on the rise. Jade Marks, a 26-year-old artist and herbalist in the Bedford-Stuyvesant neighborhood of Brooklyn, recalled a recent post by a friend on Instagram: “Are there any other queers out there who are monogamous?”

...Most weekends in New York ... there are lecture series, workshops and discussion groups. There are cocktail hours and meet-and-greets. And there are, of course, parties.

On a recent Saturday night in Crown Heights, an angelic gatekeeper in a pastel harness did her best to assure a reporter that she wouldn’t be a total buzz kill at a private party of 200 mostly straight, mostly non-monogamous New Yorkers. “Just watching is O.K.!” she said outside the site, a loft lit like an infrared sauna. “Have a good time! Stay hydrated! And always ask for consent!”

Inside were some of the happiest-looking sober adults ever seen after 2 a.m. “It’s like ‘Eyes Wide Shut’ meets a Gaspar Noé film,” said a Scandinavian digital artist and recent Brooklyn transplant. He and his girlfriend were attending for the first time; they had read about the party, called NSFW, on the internet.

NSFW caters to the 25-to-35 age bracket, has an all-black dress code and is made up of 60 percent women, according to its founder, Daniel Saynt. Its application for membership requires a social media profile link (“It’s very curated,” Mr. Saynt said) and responses to open-ended and check-box questions.... That may sound like the precursor to a job interview, but the point is to ensure that the needs of attendees are met. Wouldn’t it be nice if other clubs worked that way?

...“I don’t think that polyamory is somehow more evolved than monogamy,” said Zhana Vrangalova, a sex researcher who will teach an online course for couples and individuals seeking to open their relationships this fall. “But it should be an option. People should have more options.”

That was a maxim for the two dozen non-monogamous people interviewed for this article. ...

Consensual or ethical non-monogamy is an umbrella term that encompasses various relationship models, including polyamory, open relationships, sexual encounters with more than two people and swinging. Polyamorists are interested in exploring long-term relationships with multiple people. Swingers tend to be older couples opening their marriages recreationally.

...In major cities, there are plenty of ways for non-monogamous and polycurious people to meet, among them apps, dinners, friends, blind dates and parties. In New York, organized sex parties include Chemistry, which requires a Q. and A. application and photo, but doesn’t screen for a particular look; NYC Inferno, a gay play party that mostly attracts cisgender men but is open to queer, trans and nonbinary people (Playhouse, a spinoff event, revolves around trans guys); Skirt Club, a members-only club for bisexual women; and Wonderland, which welcomes everyone as long as they bring a buddy who will vouch for them, and are committed to fantastical dress codes (“Ancients vs. Aliens,” “Dungeons and Drag Queens”).

...Now a cottage industry of coaches and educators has cropped up to help polyamorous partners strive for compersion, the happy-for-you alternative to jealousy. Effy Blue, a relationship coach in Brooklyn, works with all of the following: triads, or three people in a committed relationship together; individuals seeking to transparently date multiple lovers simultaneously; partners who each have intimate friends, all of whom are close; and clients cultivating long-term relationships with someone who already has a primary partner.

“There is no single model that suits everyone,” Ms. Blue said. She also wrote a book on play-party etiquette. “Consent is the cornerstone of any well-produced, healthy and fun sex party,” she said. “This makes it safer and more fun than an average nightclub on any given day.”

Ella Quinlan, a 27-year-old event planner, said she knows hundreds of peers on the East and West Coasts practicing their own flavors of non-monogamy. In her own relationship with Lawrence Blume, a 55-year-old tech investor, Ms. Quinlan’s goal is to enhance what is conventionally beloved about monogamy, she said.

“We want to show people that it’s actually possible to be in a long-term, healthy, satisfying, deeply rooted and connected emotional relationship with somebody — and do this,” Mr. Blume said. ...

Read the whole long article (online August 3, 2019). It also includes (how could it not?) a lot about Hacienda, the "intentional sex-positive community in Bushwick," which now has four locations.

The article doesn't seem to be in today's print issue, but I bet it's planned for tomorrow's Sunday edition.

Update Sunday Aug. 4: Yup, there it is on page 4 of the Style section.